A Dark and Delicious Diary of Emergence 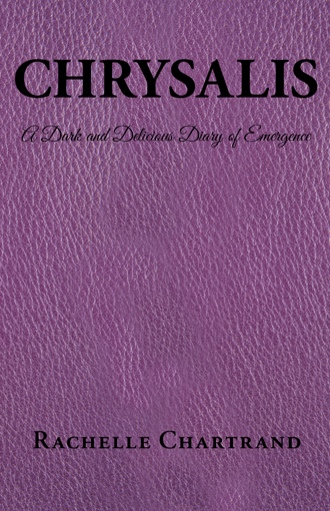 On December 23, 1985, Rachelle received a diary for her thirteenth birthday. Her first entry was a pact with God. Either she would have a boyfriend by New Year’s Eve or she would kill herself. She got a boyfriend.
Twenty-six years later, Rachelle receives a different kind of gift for her 39th birthday: a visceral vision. When she turns 40, she will turn into a butterfly. After decades of delinquency, promiscuity, bulimia, alcoholism and two failed marriages, Rachelle is eager to shed her caterpillar life for good. She buys a new diary and makes a new pact, dedicating the next year to her butterfly emergence and vowing to follow any guidance the Universe provides. It whispers back two words: Inspired Ideas.
CHRYSALIS: A Dark and Delicious Diary of Emergence chronicles Rachelle’s heart-wrenching, heart-healing metamorphic year. It is a profound and provocative memoir of forgiveness, acceptance and self-love.

Rachelle Chartrand is an award-winning screenwriter and past-president of Women in Film & Television Vancouver. She received a bachelor of education with a major in physics and a minor in math from the University of Alberta. Her eclectic teaching experience includes working with ESL students abroad as well as at-risk youth, young offenders, and autistic children at home. Rachelle lives in Vancouver, British Columbia where she continues to emerge.