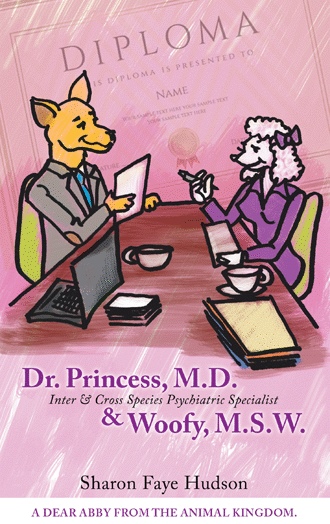 Simply put, this is an inter and cross species “Dear Abby”, if you will but written to Dr. Princess, M.D. Inter and Cross-Species Psychiatric Specialist (a standard poodle) and Woofy, MSW(a Heinz 57). These inquirers are highly evolved, intelligent and have some interesting observations on humanity and the state of the planet. Their comments are at times political, philosophical and comedic.

Finally someone we can communicate with on our level. Humankind tends to think that we do certain things “on” and “to” newspapers. Not one of them has ever thought that we actually read them and that the news is so ‘bogus’ that we, in a fit of animal rage, either tinkle or tear. But I digress; I look so forward to confiding in you in future and I am an instant fan.

Thank you ever so much for being willing to share with us. We look to hear from you soon.

Listen, I’m having differences with my owners(don’t worry, I know that I own them). I’ve told them over and over that I only like Alpo Snaps and yet because of the financial crisis sometimes they actually try and sneak some off-brand generic crap on me, like I know they think I can’t read the packaging but even if I couldn’t , surely some pattern recognition or some sort of Pavlov Bellian visual would be a strong signal or lack thereof even, but do they think I can’t TASTE the difference? Dr. Princess, I’m using every ounce of my being not to ask for a script and so far I’m winning…in the meantime , how can I get them to see the necessity of self-sacrifice(theirs), and get me my snaps?!

When they DO buy the Alpo Snaps, go absolutely beserk with joy and happiness and unrelenting begging.

Knock over the waste basket (full of cigarette butts and ashes or if they’re health nuts, full of banana peels and sunflower seed shells) repeatedly.

Sit on the remote and change the channel just when they’re knee deep into “LAW & ORDER‘.

Constantly pretend that you will absolutely DIE if you don’t get another handful.

Get the picture? Let us know what happens.

To begin, I’m absolutely overjoyed that some media has finally realized that there are canine, feline and other intellectually motivated species on this planet, so bravo!

Now, I’m writing because I live with a great family but my siblings are getting on my nerves, big time.

Me? I’m a female; fixed, fine and brilliant 5year old Heinz 57(rescued from straight-out Neanderthal demons). I don’t know what with I’m mixed and I don’t care and seemingly, neither does “Claude”, my fixed male boxer brother. I mean, it’s flattering but his constant adoration is a bit off- putting and maybe even a little fake? Why do I suggest conspiracy and paranoia? Well doesn’t all of the news stories have you wondering sometimes about motives? Well, this is about Genie….the poodle, whom is a for sure jealous individualistic diva. YES!!! The green eyed monster is a cross-species pandemic, if you ask me. But back to Genie…..she is cute, in fact she’s absolutely beautiful, but so mean and devious. She tears things up and I’m blamed for it but my owners do not hit nor discipline me because they know that Genie is a hater….In fact she doesn’t know that she’s adopted but do I try to hurt her feelings? ; if she has any! Emphatically NO! So what is the question? Well, truthfully, I’m about 2 inches from being all up in Genie’s kool–aid and I don’t want to because I’m bigger. HELP!!!

Your prescription is arriving today before noon, so look out for the PET-EX truck. These meds are to be taken as prescribed. Do not mix with alcohol no matter how many half-filled martini glasses are on the floor or beer cans for that matter, next to the chaise.

Oh! You might want to sneak one to Genie every now and then, wink, wink.

This book is an exploration of the thoughts, mental and emotional frameworks, and psyches of the Animal Kingdom, offering their unique perspectives on the human condition, concentrating seemingly on humanity’s behavior toward each other and the collective consciousness of the Animal Kingdom.

Sharon Faye Hudson, a native of Shreveport, Louisiana, is a visual artist, a former on-air personality for a classic-rock station, and for a time she was a SAG agent in Hollywood, representing actors and writers. She is a friend of the Animal Kingdom wholeheartedly and passionately, and she is an avid reader/researcher of history and ancient spiritual systems.

Sharon’s interests also include astronomy, and she loves stand-up comedy.