The Need For Balance 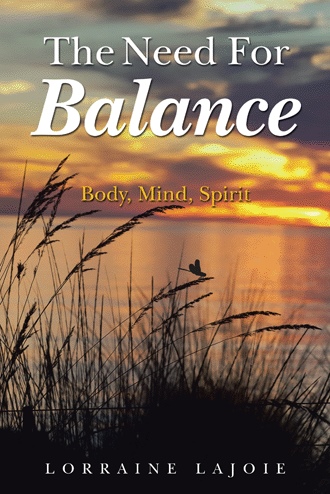 It was the end of June, and we had endured excessively rainy weather, affecting everyone’s mood. It seemed as if summer was going to pass us by – and the season was already short enough in the North Country to begin with.
Upon waking early one Sunday, to beautiful sunshine, it not only warmed the earth, but also my spirit. I knew it would be a perfect day to go for a walk. My hope was that my husband, Roger, would join me when he awoke. For my usual morning meditation routine, today it was a CD by Carolyn Myss that guided me into a chakra clearing session. Meditating is a part of my daily practice, especially since my mother’s passing, nearly a year prior. Doing so not only allows me to feel connected to her, but also, to my angels and to God. While entering meditative state, my intention has always been to realize what my purpose was for that particular day.
When Roger woke, I was delighted to learn that he shared the same thought about a walk. We chose to venture down the by-pass road near our home; one we frequented often, since it is a favorite of ours. While alone there, walking and talking, we have had some of the most wonderful experiences. It was always on this trail when we received the best spiritual guidance.
That day seemed different in every aspect. The mountains and trees looked greener, the sky was a deeper blue, and the birds even sounded like they were in harmony. It was almost like being in a dream. We were both having a great morning and thought the moment of well-being we were experiencing was due to the detox program we had just completed. Periodically, we would do this to maintain good health. And as a result, we always had increased energy and clarity.
While walking, we discussed the fact that we were feeling much better than usual. I shared that I had taken yet another class about health and energetic techniques. Our conversation led to discussing my shoulder and how, when I self-tested, it showed a tendon had slipped out of alignment. This was preventing me from fully raising my arm, and causing extreme discomfort. Knowing now, that everything is energy, I balanced it as such. Using one of my newer techniques called The Body Code by Dr. Bradley Nelson, I energetically aligned it where it belonged. I was completely amazed how well it worked through my level of relief.
Roger responded by telling me that there has to be a place within the medical field for what I do. I agreed that doctors just don’t have enough time to spend with patients to get adequate information. Something required for fully diagnosing and healing them. Discussing with my clients the personal details about their health issues, makes a huge difference in their overall well-being. That was when he got a “hit”, which declared that this was the perfect time for me to write a book, put all my knowledge and experience together, so I may reach those interested in how to be well.
Now, when Roger gets a “hit”, his body becomes covered with goose bumps. They aren’t the typical type that appear when you get a chill or when something emotional happens. These come out of nowhere and he describes it as a rush of energy sweeping through his body. It sometimes emanates from his feet and other times elsewhere such as down his spine. We have associated it with divine guidance. It has never failed us.
Previously, we had thought that a great way to give back was to open a clinic. I was told this same thing by psychics who were “the best of the best”, but it just never resonated with me. I felt so much resistance. This, on the other hand, just felt right. We knew we could reach more people, through a book.
As we continued to walk, we steadily received more guidance. It was so clear how all this was falling into place. His hits were non-stop at one point. He removed his cap and described a strange sensation he had on the top of his head. He couldn’t understand why. In response, I explained to him that it must be his crown chakra, which signifies his spiritual connection. In that moment, I stopped dead in my tracks. A dragonfly had landed on my solar plexus (the area just above the abdomen) and appeared to be looking up at me! I immediately burst into tears, for, you see, the dragonfly has been a symbol to me of my mother’s spirit.
When my mother passed away, my sister, Louise selected a beautiful reading for her service. It was called Water Bugs and Dragonflies, by Doris Stickney. The dragonfly was a symbol for my mother in the other dimension and I would see them everywhere, particularly in places where I had never noticed them before. They were on signs, plaques, pins, and necklaces. She was everywhere, and now, right on me! “Your mother is here to help you on your journey,” Roger remarked.
Simultaneously, Roger and I just looked at each other in absolute amazement. It was an astounding moment; we just never believed it was possible for this to happen! After a brief period of resting on me, the dragonfly flew away, only to instantly return and visit Roger in the same manner. It positioned itself in the exact same place on him for about the same amount of time. “She was not only here for you, but for me as well,” he said.
We watched the dragonfly leave, and yet again, she returned for a third time and proceeded to lie on the brim of the cap he was carrying. She lingered while Roger made comment about my mother being with both of us and would remain present throughout this journey. And what a journey it has turned out to be!

• Have you wondered why you’re not feeling well?

• Are you ready to do more than just band-aid your symptoms, and instead get to the true cause of your discomforts?

• What if you, yourself, held the answers?

In The Need for Balance: Body, Mind, Spirit, share a woman’s personal journey of how she overcame her own health issues. Through kinesiology, she learned a variety of techniques to bring her body back into balance—physically and emotionally—allowing a spiritual awakening to occur.

With over twenty years of experience, she now teaches that you have the ability to do this as well, allowing you to be your healthiest self. She explains how to let go of your past in order to move forward, in genuine happiness and abundance. This allows your light to shine and your soul to guide you on your journey of the human experience.

The Need for Balance: Body, Mind, Spirit, is organized in a way for you to freely navigate whatever your needs may be. You may easily begin in any chapter.

— Learn how to muscle test to find causes of discomforts and the possibilities of what those might be.

— Discover techniques to assist you to let go of all past traumas.

— Share this couple’s story, once their souls have united, as they set out on a spiritual journey like no other.

Lorraine LaJoie shares her experiences as a kinesiology practitioner of over 20 years. She is not only passionate about her work but also enlightening to those interested in their own well-being. Lorraine has a guided meditation available, including sounds supporting each chakra. She and her husband, Roger, live in Gorham, New Hampshire.