Down the Bayou Cajuns 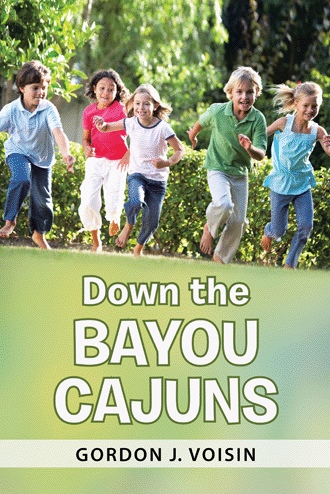 • In the Prologue you’ll get an idea about what Cajuns think and talk about with a short description of how the Cajun were banished from Acadia. • This section, the Introduction, is a more detailed history of how the Cajuns came to Acadia and why they left. • The following is a synopsis of each story: • The Prazz story begins with an incident when I was six years old where I kinda/sorta hung myself out to dry. “Ask the cat” seems to be a foolish, but desperate act, however I was guilty and I probably deserved what I got. • Watermelons and babies get confused in this tale. Babies grew in watermelons inside mommas’ bellies. See how this six year old struggles with the ridiculous notion of such a statement and how this Cajun handled it. • Purple Heart Wounds is a classic, describing what it was like for a seven year old to deal with a gaping wound and what went through his mind during the ordeal. Read how this brave little soldier dealt with the situation. • Bone-Narrows and X-trays tells the story of how this young Cajun dealt with a dangerous situation and how it ended up being just another bump in the road. • Down de Bayou Sports covers the years between 6 to 16, highlighting the ingenuity of a group of kids finding unique ways to entertain themselves, despite not having the necessary equipment to engage in sports, no matter what befell them. Laugh at the antics of these enterprising youngsters and their endeavors. • Gadget Man tells the tale of the genius in our neighborhood. He was the one who always found the solutions to the problems that we encountered. For instance, when we found an old gold ball he nailed a chunk of wood to a cut broom stick to make a dandy golf club. • In Geem Warrens you’ll get a look at how youngsters leave childhood behind and how they tip-toe gingerly into the shoes of an adolescent, but not yet ready for the cold hard facts of life, and not yet ready for the emotional consequences of their choices. • In One Snake you’ll see how this Cajun gets chased out of one of his favorite fishing spots by a giant water moccasin. It’s a tale of common sense prevailing in a shootout between man and beast. • In Cooking With Gas you’ll learn about Cajun cuisine, what we eat on a daily basis (like Sauce Piquant), and what we eschew for our daily meals (like spinach and hors d oeuvres). You’ll discover that seafood is something we eat almost on a daily basis. • In Nonk Sam you’ll get a glimpse of what it was like being a Cajun in Uncle Sam’s Army. You’ll also find out what it’s like being singled out for being a Cajun, one who speaks with thick accent and one whose lifestyle is at odds with the population in general. • The Cajun Point Man story gives you an in-depth look at how this Cajun viewed the war up close, as he went about his business of being a Point Man in an Infantry outfit. You’ll see the comical things that happened during his one-year tour of Vietnam. In essence, you’ll get to see the lighter side of war. All of this from the perspective of a 19 year old. • In Eating Crow you’ll get a look at what it was like being a hard-headed, obstinate Cajun. The bad thing about it is that he’s the one who had the burden of going out and proving he’s right about something, even if the odds were stacked against him. You’ll catch on early that he’s headed for a disaster and he’ll have to pay the consequences for his indiscretions and has to face his wife, which is the worse case scenario for him. • Did you ever get the feeling that you’re just pissing in the wind? Well, that’s just the way this Cajun felt trying to explain the concept of what a First Down is. Try explaining it in a few paragraphs to a wife who knows nothing about football. Follow along and see the frustration he felt. • In this story, Political Meanderings you’ll find that Nonk Pee-nook is a unique character. He’s obstinate, head-strong and quite biased. His idea of a conversation is he talks and you listen. That day, the topic was politics. Follow along as Nonk Pee-nook tries to make his point. You’ll come to see that he’s right on target in his diatribe. It’s amazing that an unschooled Cajun can have such uncanny insights. • The game of Peed-row is a staple of the Cajun lifestyle. Don’t bother looking for it in a book to find out how to play. It’s strictly a Cajun card game. It’s an unbelievably complex game in which recall and anticipation are of prime importance. There are examples of bidding and passing and what to play as the game progresses. The game incorporates some aspects of Bridge, Spades and Pinochle. After you’ve read the story you’ll be able to play the game, though it took me many years to learn the nuances of playing. After almost six decades of playing you’d think that this Cajun has learned something. • In closing, keep in mind that Cajuns are a simple people. Not dumb, just simplistic. They live their lives uncluttered by the rat race mentality. Yet, there’s a complexity to our simplicity; there’s more than meets the eye. We espouse a lifestyle that centers on family, sports, seafood, Cajun cuisine in general, gossip and card games (not necessarily in that order). Even when people call us “Coonasses” it doesn’t ruffle our feathers. Although the term is derogatory we ignore it and go on about our business. It’s just as simple as that.

There are many reasons that growing up as a Cajun was fun.

It’s been fifty years since I penned the first story in this compilation. Down the Bayou Cajuns grew from youths into adults one story at a time. I kept adding until I had reached bona fide adulthood.

Follow along and you’ll learn to speak some new Cajun-English words, as well as quite a few Cajun-French words. You’ll find that at the beginning of each story I use half English, half French—that’s the way we Cajuns speak. Then there is a translation of the passage.

Follow me, nicknamed May-neg, along the bumpy path from childhood into adulthood as I kept finding myself in predicament after predicament; times that, as I look back, weren’t as bad as they seemed at the time. It is a snapshot of a more innocent time.

The author was born and reared in a tiny community named Dulac, which is about 75 miles South of New Orleans. After graduating from South Terrebonne High School, he was drafted and sent to Vietnam for a year’s tour, from July ’66 to July ’67, giving him a fresh perspective of what it meant to live in a free society. After a few years in the oil fields of South Louisiana he attended Nichols State University in the mid 70’s majoring in Psychology and earned a Bachelor’s in the field. He spent seven years working on his Masters Degree, but that fell by the wayside after what was a major conflict that caused him to forego the higher degree. Since then he was disabled and was unable to work in the oil fields and as a firefighter. After his stint there he began his career in writing, which was his great passion: Plastering words on a blank sheet of paper. Today he lives in Houma where he has two books published and three more in the works.