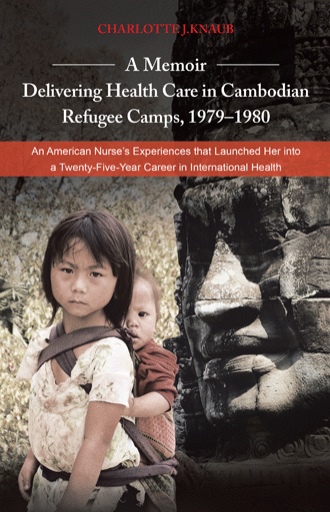 CHAPTER 2 ARRIVAL IN THAILAND
Twenty eight hours after departing Washington, D.C., we arrive at Don Muang Airport, Bangkok, Thailand as the sun is rising. In moisture-laden, over-heated air, my spruce green parka is quickly discarded. Our schedule promises us three days in Bangkok for “recovery and duty orientation.” Rueben, the U.S Embassy Field Officer who meets us, cheerfully informs us we would be driving directly to the Sa Kaeo Holding Center near Aranyapathet. He reports that the situation has worsened and we are needed at this camp, the first to open, now receiving 400-500 new refugees daily. Our hopes for a respite in an air-conditioned room, a warm meal and a refreshing bath quickly evaporate. It does not take long for me to become aware that a “change of plans” is the norm in these volatile situations.
The crisis is escalating at the Thai/Cambodian border. Mobile medical teams are urgently needed. Earlier in May, 40,000 Cambodian refugees had fled into southeastern Thailand but had been forcibly returned to their homeland by the Thai military. Many refugees had been found shot. Now, an estimated 50,000 refugees are massed at this border, and have begun pouring into the country. These desperate men, women, and children are extremely fearful, as they have no way of knowing if they will receive help or gunshots, or be turned back-again.
When I wearily step out of that cramped van eight hours later at Sa Kaeo Camp; in the dusty, oppressive heat of late afternoon, I can think of nothing but how differently I would imagine the look of a war zone. There are no gates, fences, or signs-just mud and bodies in an empty rice field, army tents and Red Cross flags; dust-laden air, a fierce sun and the fetid odor of sickness and death. Pieces of blue plastic, supplied by the United Nations High Commission for Refugees, hang on everything available, stretched out for covering, as far as I can see.
At the outset, the United Nations High Commission for Refugees (UNHCR) and the voluntary agencies were totally unprepared for the arrival of these refugees. Sa Kaeo Holding
C.J.KNAUB
Centre, one of the first of 21 emergency shelters, had registered 31,000 Cambodians upon admission seven days ago. The daily death rate is an estimated 20-25.
For several months the fact of the signs and indications of a mass movement of refugees had been present; political maneuvering commenced but operational preparedness was minimal. Two thirds of the arriving volunteer, expatriate physicians and nurses are surgical or curative specialists when the greater needs are for preventive or public health approaches, i.e. latrines, sanitation, clean water, nutritional support and disease prevention through immunizations.
My personal “felt” needs and discomforts evaporate in the reality of the magnitude of misery surrounding me. My concerns of whether I eat or not, bathe, have a safe place for rest or not, are immediately made irrelevant. The team’s original assignment and our plans for surveys and organized immunization clinics are also rendered irrelevant when I am immediately recruited to assist in triaging new arrivals. This process, a basic practice in disaster situations, provides an instant assessment of the sick and injured so the most appropriate care can be rendered more quickly. Rapid evaluation utilizes colored tags to indicate the degree of urgency for care and to which area they are to be taken.
GREEN TAG---MINOR-WALKING WOUNDED.
YELLOW TAG---DELAYED-SERIOUS, NOT LIFE-THREATENING
RED TAG---IMMEDIATE-LIFE THREATENING INJURY
BLACK TAG---MORGUE-NO PULSE OR RESPIRATIONS
It is very quiet. There is a sea of sick people all over the place crouching, squatting or lying on the muddy ground. The refugees are emaciated brown living carcasses, all limbs and eyes and folds of skin. Some shuffle around like zombies with glazed, expressionless eyes.
C.J.KNAUB
The last truck from the border unloads and we find the lifeless bodies of two young women and three, very small children in a corner.
Unfortunately, too many are beyond our help, either dying or already dead. These receive the Black Tag and are moved aside while we concentrate on treating those refugees with Red Tags. Many are children, with the best chance for survival. Concentrating on performing tasks I had no previous experience in performing, I lose all track of time. Benumbed of body, mind and spirit, I sense, rather than feel, an arm around my shoulders, leading me away from the chaos. Several more arms lay me down on a lumpy mat and remove my mud-crusted shoes and splattered Levis. The prick of a needle in my left forearm and I slide into welcome oblivion.
Six hours later I awake to a cacophony of sounds and different languages and the odor of wood smoke and human wastes that would become familiar during my stay. My rescuers identify themselves as “The Best Emergency Response Team in the World!” This team of ten Israeli epidemiologists, led by Dr. Michaela Alkin, arrived at Sa Kaeo Camp at midnight, driving directly to the lantern lights in the Receiving Area. Experienced disaster medics, they have brought their own tents, food and water, as well as medical supplies. Recognizing my state of dehydration and exhaustion, they took care of me; rehydrating me with fluids, providing a rest area, clean “scrubs” and now a meal. During the following days I endure frequent teasing from this team as I am dubbed their First Refugee-the American lady that had to be rescued!

People would rather forget. The years of United States involvement in Southeast Asia, the Viet Nam years, ended for most Americans in 1975. For the Cambodian people, whose history seems an endless succession of wars, occupations, and sufferings, 1975 marked the beginning of an era of terror unknown in previous times.

Khmer Rouge soldiers overthrew the corrupt regime of Lon Noi. Literally overnight, whole populations of Cambodian cities were ordered to move to the countryside, under the ruse that America was going to bomb them. The Khmer Rouge tortured and starved the people. Death from disease, malnutrition, and execution were rampant in what became known as the killing fields.

When the horrors of Pol Pot and his regime were followed by the Vietnamese invasion, thousands of surviving Khmers, rather than live under the rule of their traditional enemies, fled and crossed Thailand’s borders.

In 1979, Charlotte J. Knaub was a public health nursing consultant with the Montana State Department of Health when she was offered a three-month contract to work in Thailand’s refugee camps. As she became aware that the relief operations reflected the unique opportunity for people around the world to join together in relieving the suffering and meeting the desperate needs of the Cambodian refugees, she determined to remain a part of it. Her three-month assignment was extended to thirteen months. This is a memoir of those life-changing events.

CHARLOTTE J.KNAUB was born, raised, and educated in Montana. She worked as a public health nursing consultant in Montana, which led her to a twenty-five-year career in fifty-seven countries in international heath with the International Refugee Committee, the World Council of Churches, and the World Health Organization.