Where the Monster Weights

How Anorexia Held Me Hostage 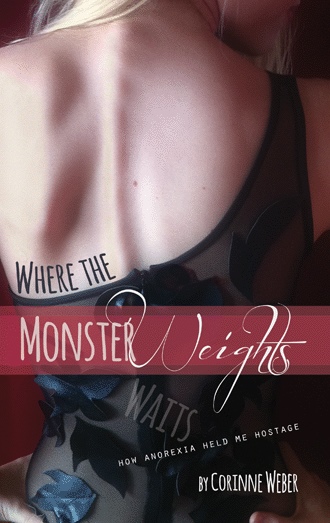 I wasn’t sure how to cope with the news Grace had shared. It scared me. I think it scared my monster too. It seemed quiet lately. I remained on autopilot as far as choosing foods but the voice, for now anyway, retreated somewhere into the shadows. I tried to not think about Grace and focused on my studies.
To my amazement, my grades didn’t suffer as much as I'd expected. Although I bombed a psych test the week after my birthday, my overall scores hovered above average. Not to say I didn’t struggle through that first semester. I did. But, I also worked hard. If a professor had office hours, I made it a point to be there. Every extra point opportunity for attending lectures, I had marked on my calendar.
One speaker in particular captured my interest.
The poster read: “Holocaust Survivor Gerda Weissmann Klein to Speak at Chapman University, November 8.” A recipient of the 2010 Presidential Medal of Freedom, Ms. Klein came to the school to share her story of hope. Hope and Freedom—two things I needed. I jotted down the particulars on my calendar and traced a big ink star several times in the margin.
I reached for my sweatshirt and notepad the night of Ms. Klein's talk and headed towards Memorial Hall. It turned out to be a popular event; a crowd had already gathered outside. Glad I’m early. Once I entered the auditorium, Lindsey waved at me to come close to the front. I settled in next to her, iPhone off. I didn't want to be interrupted during this one.
“One Survivor Remembers” began playing on the screen. Atrocities of World War Two and a final three-month death march. Gerda had survived it all.
After the film, Gerda came to the podium to speak. She both confused and amazed me from the first moment I saw her as neither her face nor her voice held any bitterness. The film discussed at one point how her weight had dropped to 68 pounds and her hair had turned white due to lack of nutrition. But this woman before me had obviously lived a long and fulfilling life after a horrible period of captivity and torture. I considered her journey as she delivered a message of not focusing on what is missing in life, but on seeing what is there.
How could this be? How did this woman keep anger and bitterness from taking root in her heart? And if she harbored no hatred—this woman who had experienced the worst of humanity—how could I, who hadn’t experienced anything like that level of brutality, be justified in storing up resentment in my own?
I immediately turned in my mind and glared at my monster. I couldn't detect its form but its presence permeated the darkness. So I waited and stood my ground. I didn't back down but in quiet defiance, challenged it to come out and fight. How dare you!
It was the first time I'd faced my monster head on, but I sensed the rebellion of my action—and I liked it.
I tuned back in to Gerda and listened to her example of turning trials into positive action. That gave me an idea. Maybe I could help others if I got well. Maybe I could come alongside other girls like me and help them in their own struggles. Lofty goal though. My monster would not go away without a fight.
At that time my primary focus concentrated on staying out of in-house treatment. I still fought a war inside my head but at least I had a new strategy for counter-attacking the enemy—a defiant face-off. Kinda sorta. Whatever the case, I no longer felt in complete submission. In fact, I started to grasp at hope—there might just be a way out of the torture.

Grace withdrew from Chapman on medical leave and entered a treatment facility not far away. I didn’t know if I could contact her, but I did anyway, not knowing if she would or could respond. We’d exchanged contact info the night of the party and I texted to tell her I was thinking of her.
“I’m OK. Thank you so much for getting in touch with me. I should be out of here soon,” she responded.
I imagined Ensure as part of her refeeding. My mom had asked me to inspect these complete balanced nutritional drinks at a grocery store not long ago. She’d said that she and my dad would do exactly what Susan asked. If that then required in-house care, they’d withdraw me from Chapman and I'd follow Grace’s route of treatment. With three hundred and fifty calories and eleven grams of fat per
serving, Ensure was bound to be part of the program to gain weight. Drinking my calories did not sound appealing at all; I could think of many things I’d rather eat. I could have a Chipotle salad with barbacoa, black beans, and fresh tomato salsa for three hundred and twenty calories and only eight grams of fat. I was not going in-house.
First week of December I began to prepare for finals. I also moved into a house with some sorority sisters. I figured that a fresh start in a new place could change everything; I’d be able to cook and bake with my new family in an emotionally safe and protective environment.
One day Mom, who'd remained in town at a nearby hotel so she could look after me, took me to a grocery store. With the help of my nutritionist’s notes, I carefully selected the usual safe items first, then added a few outside my comfort zone. I hesitantly approached the checkout lane, tallying the figures I was sure of:

The frozen waffles, bananas, and roasted chicken caused me a bit of distress but my mind was set on making change.
My turn in the checkout aisle. I placed my selection on the conveyor belt, averting my eyes from the box of waffles and the temptation to read its nutritional panel. What I saw instead, however, didn't help. The cover of a popular magazine highlighted an A-list actress. She posed, all smiles and waving her hand. The caption taunted me: “DESPERATE TO BE SKINNY: She’s surviving on just 600 calories a day.” I zeroed in on 600. I can beat that.
I grabbed the offending waffles, the bananas, and the chicken, setting back inside the cart what the specialists viewed as a prescription remedy for my illness, but what I could only see as props for their propaganda. The actress looked happy enough to me. I chose sugar-free gum instead. 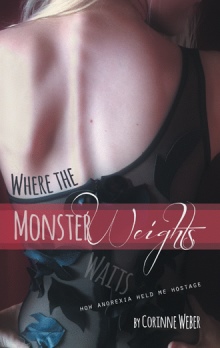 Where the Monster Weights
Corinne Weber
$20.99

Corinne Weber was growing up in a close-knit upper middle class family with her twin brother as her best friend. But her life takes a dramatic turn when she is eight years old and her family moves to Singapore. The move catapults her into an ocean of change. She walks in to her home one day to find blood splattered across the bathroom floor—a telltale sign of her brother's cutting. Her life becomes a dark and desolate place. If it weren't for meeting a handsome exchange student, Corinne might have ended her life. She and the exchange student become entwined at the peak of her brother's rebellion, which is evidenced by his newly inked “People=Shit” tattoo that is peppering the newsfeeds of social media. But when her new love moves back to the states and her brother is sent away, a series of emotional and physical triggers cause Corinne to succumb to an illness she can't define. Living in parallel universes, she pivots between loss and the long-distance love who is keeping her sane. But the compulsive thoughts inside her head reign above all else, tearing her life apart as she loses even more of what she holds dear. Caught in the unending torment of her depression, anorexia is exposed as the monster holding her hostage. Through her faith and some crazy college experiences, Corinne finds the strength she needs to claw her way back to recovery. Where the Monster Waits reveals the existence of hope and healing in the midst of tragedy.

Born in Texas, Corinne lived in Dallas until her family moved to Singapore when she was eight years old. Upon graduation, Corinne repatriated to L.A. where she currently attends Chapman University. Corinne is majoring in Health Communications. Her life's goal is to provide hope for those suffering from an eating disorder.