Even the Land Cries! 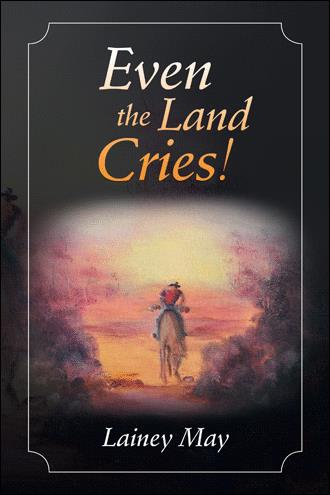 Time, seems always in the “long ago,” in this vast and beautiful land; a land pregnant with a story that now can be told----

I breathe in the fresh, cool air. A breeze gusts through Jam-wood stands and spreads their pungent aroma all around. Away across front paddocks, the Orleans track, wends its way into and beyond eroded gullies; that stretch sprawling fingers, outward and on to the Western horizon. The old homestead still stands---a lasting testament to those who fashioned it and sheltered in those unmoving walls. The brave, old house has withstood extremes of relentless elements; the unforgiving heat, from scorching desert Northerlies; the drenching frontal rains and storms of the western flowing---“Roaring Forties.”
But, even more-so, shredding rains and raging, icy winds of the south; whose gales are spawned across frozen Antarctic wastelands and ultimately “spew” themselves through vast expanses of the wild Southern Ocean. The homestead consists of limestone blocks, each a full two feet thick, one staid upon the other. The blocks were hand-hewn from coastal cliffs at Stormy Cove, some twenty miles to the South. Doors, door frames, window frames and roof struts, were all hand hewn from Jarrah timbers, brought in by dray from north-west of Orleans town. The Jarrah beams yet hold the roof securely to the blocked walls, and all shows little attrition from the many years passed by.
There on the homesteads veranda, I stand, surveying the scene before me and I try to shake off the uncanny feeling, that I could well have been breathing that same fresh, cool air, from way back then; so little has changed. Time and again, I have wandered through this dear dwelling place and pondered but that these walls could talk and share their secrets. But walls will never talk---And, for that reason, this story would have remained untold, but for this well-travelled Journal, that I hold in my hands. Within these worn covers, are carefully maintained notations and ponderings of my Great-Great-Grandfather, Police Sergeant Patrick Owain Dillon.
His writings hale from his policing days, in untamed West Australian regions, between the gold- rich Kundip, east of Perth; down past Woorooloo and further south; to the whaling port of Orleans, south east of Perth; then spreading out and up into vast eastern desert Station properties and even beyond. I have spent long hours searching through Government files; recounting Government procedure and protocols, regarding care of Aboriginal tribes in the early years of expanding colonization. There have been searches for information from the Orleans and Kundip constabularies, on known Aboriginal tribes and their lands, in the vast region. I have listened to “yarns” in countless pubs’ across the region.
Folk tales have been noted regarding this time in history and Constabulary information alike has all been incorporated with the journaling of my Great-Great Grandfather and all comes together, as a memorable historical event in Western Australia. Some might choose to disown the story told; as it unfolds from its innocent inception, to its insidious end. 0ne hundred fifty years and truth has surfaced, to become known by people who care, and can feel the agonies of the characters presented. These players, from two Nations of “displaced peoples,” thrown together, and struggling to exist, amidst treachery and anarchy.
As the story unfolds, those of you who have a heart to hear and feel, will within your own humanness hear---even the land cries!

Set against the backdrop of Australia in the 1860s—a vast and beautiful land that protects more secrets than it gives up—the displaced peoples of two nations were thrown together in a fierce struggle to exist in an isolated, inhospitable landscape. Caught between the harsh climate, nature, and the darkest sides of man, life in the wild remoteness of south eastern, West Australia was not for the weak of heart.

Inspired by historical events from Australia’s wild history in the long ago, Even the Land Cries! takes readers inside the rugged land and the strong, resilient people who sought to tame it. Jared Ryan, a bold and spirited young man of twenty, sets out to find and claim his far-flung property with his younger brother Liam at his side. Together, the brothers must call upon their raw courage to survive amidst innumerable dangers to open up farming land. Their plans are complicated by the many characters who also called this beautiful but wild land their home; heroes, heroines, and scoundrels. They’re all brought together, against a diabolical backdrop of lust, treachery, and anarchy that would change each of their lives forever.

Bigotry, lies, disgrace, outrage, treason, betrayal, and forbidden love will either motivate these young souls into forces for good or for evil, which in turn will impact the land. If they can survive the many challenges this harsh new life demands of them, they just may come to love the land as their own.

LAINEY MAY with her family has lived and achieved much in the beautiful Australian Outback. Learned resilience --- and the care of close family kept Lainey in good stead as she went through cancer, surgery and treatment in 1999. Health obliterated has taken many years to recuperate. Sharing this novella has been part of the process along Lainey’s restorative journey. Even the Land Cries yearned to be written. At the property, there is an imprint on the atmosphere that exudes historicity to this day ….ensuring this story need be told.