Not Completely Human Living on the Fringe of Humanity 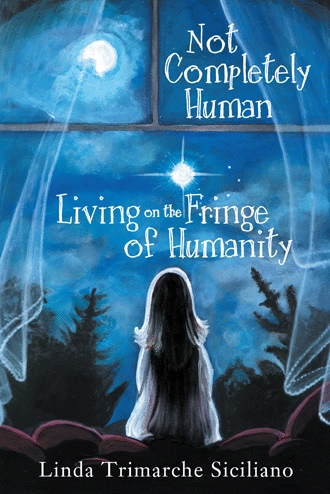 My earliest memories are not of mommy & daddy watching over baby, they are of Angels singing and playing with me.
I can remember looking out my bedroom window into the night sky and watching Angels swing from star to star; singing the most beautiful songs while others danced across the sky, their wings fluttering like diamonds against the blackness of the night. The Angels I saw had long flowing gowns made of the silver threads of the Milky Way and beautiful wings that rose so high.
I’ve played with Angels across the lawn, on the beach, across the skies.
My Angels have picked me up when I fell down, comforted me when I was sad, pushed me when I needed to be pushed and applauded me when I have succeeded.

Being the oldest, my family thought I was lonely because I was an only child with no one to play with. They were so wrong! I had Angels who sang, danced and played with me every waking moment.

As each of my sisters was born, there were more Angelic friends to play with. It was so much fun. (My sister Diane shares the same beliefs as I do. My sister Sandra, although not a believer in the beginning has had her own experience and is getting on the bandwagon!)

Anytime I would announce that there were Angels present I was told the same thing, that I had a very vivid imagination because only God could see Angels.

I knew what I knew and that was that I could see Angels no matter how many times I was told silly things about children and their imaginary friends. Who were they calling imaginary, the Angels were standing right in front of them! Was everybody blind??

Sadly, this would change for me sooner than I could ever have imagined.

For as long as I can remember, I have been entrenched in the spirit world. Then something I thought would not be possible happened: I stopped believing!

Before we begin this journey on Earth, our souls, along with God the Creator and the elders of records, decide the lessons we need to learn or teach for the life we will be leading. Each of us has the ability to connect with our angels and the spirit world, but as our innocence fades and we adapt to the life we have chosen, we forget how to see those beautiful, celestial beings and receive messages from the other side. When this happens, we become, as I like to put it, “completely human.” There are individuals who remain on the fringe, still able to see angels and communicate with those on the other side of the veil and in different realms. These individuals remain partially human while on this Earth.

Follow me down the road I traveled to becoming almost “completely human” and return through the maze that brought me to where I am today: living on the fringe of humanity and loving every minute.

Linda has been writing since she was twelve years old.  Although it started out as a way to escape, writing turned into her life’s passion. Linda was born and raised in Staten Island, New York, and still lives there with her husband and children.