Healing Body, Self and Soul 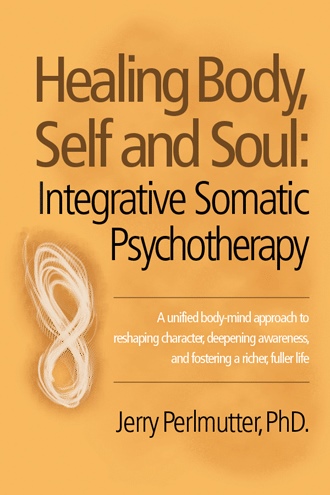 Review of Jerry Perlmutter’s Healing Body, Self and Soul: Integrative Somatic Psychotherapy (ISP) In Healing Body, Self and Soul Perlmutter offers a mature, career-long account of his primary work, Integrative Somatic Psychotherapy. He outlines his use of body psychotherapy in the character work tradition of Reich, Lowen, and Brown including grounding, stress positions, hard and soft touch, externalizing introjects, strong expression of intense emotions, and more. This is integrated with a client-centered approach of keying off the spontaneous through honoring, and respecting unpredictable experiences as they arise in the client. Work is done in the context of an ongoing awareness cycle that promotes self-awareness, self-acknowledgement, self-acceptance and self-appreciation, which in the second stage of ISP therapy, following deep character work, leads into transformational explorations of one’s soul and the spirit connected to the soul’s energy. Clearly written and outlined with rich illustrations of the clinical theory. Gregory Johanson, Ph.D. Author (with Ron Kurtz) of Grace Unfolding: Psychotherapy in the Spirit of the Tao-te ching

In this book Dr. Jerry Perlmutter describes his development of Integrative Somatic Psychotherapy (ISP). He has honed an approach that illuminates the close interaction between the body and mind. ISP is useful for healing the childhood traumas that lead to personal limitations that are called Character. In the therapy, reliving and finishing these trauma heals them. ISP also provides opportunities to explore and experience the authentic Self and the Soul. ISP uses body-based interventions that consist of the use of structured exercises and the patient’s spontaneous movement and touch work done by the therapist. Photo illustrations are used to present a sample of thirteen structured exercises and touches. Patients report in detail their experiences during the course of their therapy. The transformative quality of ISP becomes obvious in these narratives. The psychotherapy factors that elicit this transformative change are elucidated. This book is useful for psychotherapists to learn about the ISP approach and how it can be useful in their practices; it will also be helpful to persons considering entering their own course of psychotherapy; and to individuals interested in how persons change in deep ways.