A Big Piece of Driftwood 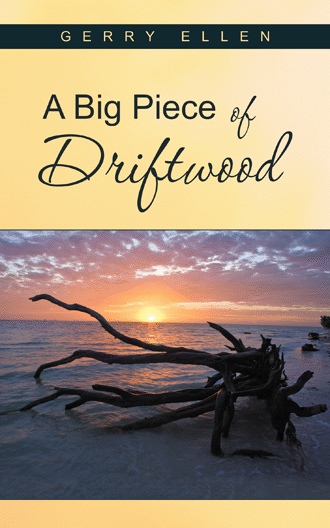 SYNOPSIS OF A BIG PIECE OF DRIFTWOOD

This fictional love story begins with Rachel Harper, the protagonist, returning from a sabbatical on the island of Bali.  Her purpose for transferring herself for months to the peaceful and inspirational setting was to gather herself before returning to her home city.  She thought she was completely ready to embark on a whole new life by starting over after she lost everything once the real estate market crashed in California.  This fueled her sabbatical.  Since she had nothing to show for her efforts in luxury living, she decided to become a minimalist and live somewhat off the grid.  Returning to her home city was like shell-shock for Rachel.  But, as luck would have it, she was able to wind her way into one situation after another that catapulted her into a continued romance with her true love from days gone by.

William Jameson was the apple of Rachel’s eye.  The only problem was he was a rather complicated mess of a man.  She continued to strive for their togetherness, only to be derailed by one obstacle after another.  If it wasn’t her job scenarios that gave her struggles, it was the fact that William took his time in making any kind of decision whatsoever.  As infuriating as that was for Rachel, she continued to work on her own self and motivations, and not depend on anyone or anything to help her with a personal journey.  She was convinced that writing was her forte and any dalliances with William left her energy zapped and her writing efforts unfulfilled.

She was a dreamer and a doer.  She was also quite childlike in nature and wanted only the simple life.  Her main passion of writing was given a front seat after she realized that punching a clock for work wasn’t cutting it anymore.  She abhorred being in a stifling and boring environment.  It infringed on her creative skills.   Rachel was comedy in action when it came to job interviews and which ones were more to her liking, all based on the job environment itself.  She didn’t care much for the work per se it was more about the smells, the sights, and the people.  Once she landed a job that was in line with her education and know-how, she decided to be on auto-pilot every time she went to work, knowing that her writing was fueled by a particular job setting and being surrounded by people while listening to their stories. This was her motivation to even punch a clock.

She was an adventurer.  She liked to do things differently and be as unique as possible.  William was attracted to her from the get-go.  He felt as if he had never met anyone like her; the only problem was his marriage entanglement.  When Rachel traveled to Central America to meet up with her long lost friend, she also wanted to escape the complications with William.  It was in that country where her life changed and her perspectives shifted.

She met Jonathan Bailey in the most random way.  His helpful nature on foreign soil helped solidify Rachel’s purpose and why she was so interested in being a true blue writer.  He had a very calm way about him, and taught her a few lessons on the simple life in Nicaragua. Jonathan Bailey was a catalyst for Rachel to return to William and embark on the greatest love affair ever.

Both William and Jonathan came from very different backgrounds.  William had experienced a hard life, yet overcame his struggles to become a great leader in his field.  Jonathan, on the other hand, was more of an explorer.  He and his then wife set sail on a long journey to land in Central America one day and never look back.  It took all he had to deal with his wife’s demands and how their marriage had transpired.  William’s marriage was quite the opposite.  His wife was completely unemotional and uninvolved in their union.  She was the workaholic, and William was left in the dust.  When both men met Rachel they had completely different ideas of who she was from the beginning.  William loved her heart, her body, her being.  Jonathan was attracted to her mind and her creativity.  Because Rachel wanted a lasting love her entire life, she made the decision to return to William every single time.

Rachel Harper felt like giving William one last chance would amount to nirvana.  It, in turn, was the most emotionally intense roller coaster she had ever been on.  She was learning more every single day when in the presence of William.  Not so much about him, but about herself and how she was able to handle more of a soulful relationship.  She was stronger, wiser, and more compassionate than she had ever been.  It gave William the space to become a better person as well.  As Rachel was transforming within the partnership, William had his own issues to deal with every day.  But their partnership uncovered a very unique twin flame dynamic. She became more aware of what the meaning of a twin flame was and how it applied to their lives.

Love became the purpose for both William and Rachel, yet they expressed it in such different ways.  Because they were total opposites, Rachel was always looking for similarities and compromises within the days of their togetherness.  She never gave up.  She definitely wasn’t one to throw in the towel.  She continued to explore the whys and how’s of each other in a twin flame relationship.  She still wasn’t even sure that the definition applied to their dynamic.  The more she delved the more she uncovered.

It was only when both of them decided to embark on several adventures together that they learned more about each other.  Rachel had a go-to friend in Annabelle.  William wished he was more successful.  Annabelle provided Rachel with one perspective after another and never wavered from their friendship.  Both women found solace in their soul sisterhood during any and all experiences within their separate lives with their newfound men.

The final scene of William and Rachel was simple and profound.  Skies opened up, synchronicities were happening all around, and they felt certain that the love they announced early on was back in full swing.  It took many years for them to realize just how meant for each other they were.  The love in their hearts brought them full circle into a reconnection with their souls and with each other.

A Big Piece of Driftwood is an enchanting story of a woman named Rachel Harper, who returns from an island sabbatical in Bali only to discover that her foregone conclusions of life and love are completely opposite to what she envisioned. There are twists and turns in her life; people and places that offer her the ability to grow and discover not only the meaning of romantic love, but also a true love of herself. Throughout her journey as an older woman, she takes a simple approach to life that leads her to every possible situation and reassures her that loving yourself first is the key to complete contentment.

Gerry Ellen is a freelance writer, author, and wellness consultant who is passionate about living life to the fullest. She is a regular columnist for elephant journal, Be You Media Group, and Light Workers World. Her work has also been featured in Girlfriendz magazine, as well as other health industry trade journals. Her first novel, Ripple Effects, was published in 2012 and became the cornerstone for creating abundance and awareness in her life. As simply as she views the world on a daily basis, she remains true to her purpose of daily creativity and inspiration. She resides in Austin, Texas.