A Story of Miracles and Spiritual Healing 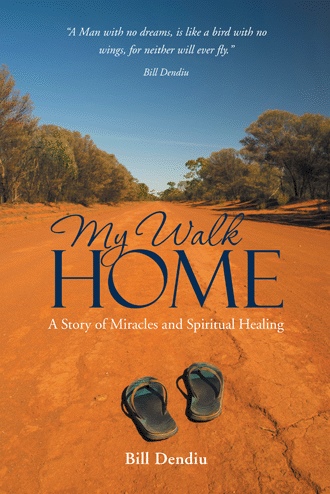 PrefaceAfter 60 years walking on this earth, Bill Dendiu feels uniquely qualified to write this book. Those 60 years include worldwide traveling, a brief stint as a stand-up comedian, 20 plus years as a high ranking official with the Church of Scientology, having headed up the churches marketing and Public Affairs activities.Everything Bill has done in his life was aimed at finding answers, joy and happiness. Like so many from his generation, the baby boomers, Bill was raised in the 50's a time of great change, affluence and growth for America. Bill experienced America going from TV to Radio, saw families begin expanding their footprint with the advent of the car, experienced the arrival of the Beatles and man walking on the moon. Essentially, he grew up believing anything was possible.So, when Bill was told he would not walk, he refused to believe it. The world he was raised in and the dogma he governed his life by, did not allow for ‘can't be done’. Billhad paraded onto the Comedy Store Stages in Hollywood and Westwood believing he would succeed, and make people laugh. That he would in some small way make a difference.Bill joined staff with the Church of Scientology because he believed they possessed potential to help his fellow man. He rose up the Scientology ranks to a point where he oversaw the Churches Marketing: wrote speeches, articles, press releases. He did this as a true believer and with the hope of helping his fellow man lead a better life.When Bill told jokes at the Comedy Store he did so hoping for laugh's, giggles and grin's. More importantly, Bill hoped that something he said would lighten the load of someone in his audience.Yes, his devotion and drive for answers was without pause and led him many places--down many path's! His life has been fueled by a passion for joy and happiness. His quest did not always lead him to the right answers. It led to drugs and alcohol, sometimes abuse! It led to too many lonely empty relationships.If Bill harmed anyone along the way, he sincerely apologizes. This journey also led Bill to The Lord. It has been a long and winding road, filled with many wonderful people, wild times, great memories. A life surely worth living and worth fighting over!Bill has interspersed stories throughout his book. There is one from the early 70's, when he was living in a house, like a hippie in Venice Beach, California. There was a varied, unique group of people living there. New friends from Harlem, friends from Ohio. Northern California, Vietnam Vets, We all had little in common, in terms of backgrounds and age.As our ages ranged from early 20's to late 20's. We were all looking for answers, the meaning of life, and to get high. Bill was often the ringleader. This one particular day as we all sat in a circle on the floor around one of those large electrical spool tables so prevalent in the early 70,s. Bill announced to his unassuming group of friends, most of them still in a haze from the previous night's revelry. Bill's announcement this early morning before the sun had yet peered through was as follows:"Today we are going to go around the room and share with everyone what each of us will do to have a positive impact on this world."Not too long later several of Bill's friends in that room had passed. By the Grace of God, Bill is still among the living!! He offers this book on behalf of himself and his friends who left far too soon.It is Bill's hope this book fulfills the dream that began in that room in Venice so many years ago. Let this be my great contribution to man, that it i be symbolic of my making a difference,To this day Bill still remembers everyone in that room.He remembers the faces, the smiles, the smells, and the hope that was in the air. It is his sincere prayer that the hope that has fueled his life wherever he went is never extinguished!Bill am happy to say that since he began writing this book, he has reunited with several of those friends in that room. He feels an uncommon bond with them, something the borders on sacred. Yes, Phil Bacon and Deby Landis, he is referring to the two of you.He hopes you remember this morning at his place in Venice on Indiana Avenue. This was one of his many crazy ideas and wild dreams to escape reality. Whether you remember or not, He love yous both dearly and always will! Just as he loves those who are gone--Billy Rhodes, Rene Pyott.Bill offers this book with great love and hope to all the readers. With the hope we can build wonderful friendships and relationships. Come walk with him in love through the pages of his book.You are warmly invited, with open arms. He hopes you get to know each other well, as it must be in any great friendship.Begin reading. Ask Questions. Open your heart and mind.I love you all dearly and I always have, that is why I write, breath, laugh and love. Love is our God-Given right! I knew that in Venice, when I told jokes, was in business, promoted Scientology. The only thing that ever penetrated my life was love.Read on! Walk On!My Stroke is merely a temporary setback. An opportunity to get back up again and make a difference!

Bill Dendiu has written a book of spiritual enlightenment as he describes his journey and awakening as he returned from the ravages of a massive stroke that left him paralyzed and wheelchair-bound for more than a year. Read how he walked again, talked, and inspired his fellow stroke survivors. Driven by love and a great passion for life, Bill Dendiu pieced his life together again. Through faith he not only beat the odds, but became a happy, whole, complete man. He shares every intimate detail of this several-year journey and awakening, offering tips on how anyone can build a meaningful relationship with the Lord and discover their true essence for a happy, joyous life. This is a must-read for any and all truth-seekers!

Bill Dendiu recently entered the sixth decade of his life. For the first fifty years, he lived an active life in which he was an energetic entrepreneur and marketing executive, the father of two, a husband, and a business owner. As his life seemed to be coming together, on August 24th, 2011, he suffered a massive stroke that left the left side of his body paralyzed. Told by doctors he might never walk or talk again, after a year in a wheelchair, through faith, he walked and talked again. My Walk Home is the inspirational story of Bill Dendiu’s journey from debilitating stroke to spiritual awakening that resulted in several miracles as he overcame numerous obstacles.