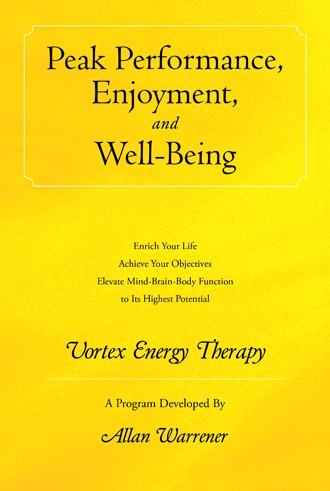 I have known Dr Allan Warrener for many years as a friend, a fellow Rotarian and a chiropractor. Allan commenced his career with the Education Department, first as a student teacher and then later transferred to the administration side in the Public Service. He later studied and became qualified in Supply Management. He was employed in large manufacturing organizations and was involved in all facets of supply management with scheduling, storage and purchasing.

Valerie and Allan later established two businesses, one with prams, strollers and nursery products, the other with all types of blinds, curtains, drapes and also manufacturing canvas products. After graduating as a chiropractor, he opened a clinic. Val eventually became very much involved in assisting at the clinic. Here is a brief summary of some aspects of Allan’s life that has taken him in many directions with research and resulted in many amazing discoveries to gradually develop and culminate into this unique, eclectic, self-help program - Vortex Energy Therapy.

Allan competed in many sports but the sport that he enjoyed most of all was running. It is interesting he recalled that in his early teenage years he became absorbed in studying the different styles of champion sprinters because he was always seeking ways to improve his speed as a sprinter. The main points that he observed with champions was the ease and relaxation with movement, the straight body alignment, high knee lift, balance and coordination and the pelvic tilt. At that time he injured his knee when competing in the broad jump at the inter-collegiate sports meeting. He was so impressed with the treatment he received at that time, that he thought that he would like to study and become qualified in this neurological, muscular skeletal field which he eventually did as a mature age student. It would seem that this period was really the beginning of a journey with the objectives that he later set, when he asked himself the question - how can we bring the body to function with maximal efficiency and become capable of performing at one’s potential?

He competed in all the classic running events around Victoria - The Stawell Gift, Bendigo Thousand, the Ararat, Maryborough and Wangaratta Gift meetings.

He is an accredited Track & Field Coach and has coached athletes at different periods.

He was invited and appointed as Running Coach by the legendary Ted Whitten, Captain & Coach of the Footscray Football Club, with the aim of improving the speed of the players. There were many champion players at that time, who also proved to be top class sprinters. It was a great era. Allan commenced this research program at Melbourne University oval, when he was invited by renowned athletic coach Franz Stampfl to assist his elite group of world class athletes, by treating their injuries and developing techniques to improve their performances.

There were three major turning points in Allan’s life. The first was to study chiropractic as a mature age student. It was with Val’s encouragement and blessing that he took this step, because Val said that she thought that it was his niche in life. The next step was when he commenced this research program. Allan said that the other major turning point in his life was being invited to join The Rotary Club of Footscray and to be able to be involved in playing a part in many wonderful, humanitarian projects with Rotary in helping people, both locally and internationally. Allan was Club President 1999 – 2000. He was honoured to be named a Paul Harris Fellow by The Rotary Foundation of Rotary International in the year 2000, and again to receive further recognition with a Paul Harris Fellow (Sapphire) in 2008.

He has always been an innovator and willing to study to improve his education and knowledge in bringing the latest technology to others. Through the years as a chiropractor he was involved in research with Dr Victor Frank, who developed the therapeutic system Total Body Modification, together with other colleagues in Australia and overseas. As a result of this research and workshops, Allan received recognition by Dr Victor Frank and his Total Body Modification group as an Environmental Stress Management Consultant and also for his contributions with research.

He has treated a variety of sporting injuries and ailments in his clinic, studied and researched many systems regarding health and healing from around the world. In this book he has correlated and merged the ancient knowledge of the East with Western Science -that is with the neurological, muscular, skeletal aspects of the body.

For many years Allan has given presentations and demonstrations and conducted workshops to explain and teach about Vortex Energy Therapy to various groups, such as Rotary Clubs, Yoga schools and courses, track and field coaches, athletes, naturopaths, a massage school - people who are interested in Vortex Energy Therapy and enjoying better health and wellbeing. With the use of each technique everyone is able to see the immediate improvement and changes that occur each time. With each technique the criteria for scientific validation, of predictability, measurability and repeatability can be demonstrated.

Allan has always been interested in helping young athletes to improve their performances. In recent years he has very much enjoyed being involved with the Ethiopian community, assisting the soccer players and athletes and being interested in their capabilities and potential. This happened because of our Rotary Club of Footscray assisting the Ethiopian community organize their annual soccer tournament with clubs from around Australia.

Today we are witnessing a great transition in medical thinking. New methods and treatment are now changing the lifestyle of many. The text offers the reader the opportunity to use these powerful self-help techniques in bringing the body to function at its highest level of efficiency. Allan Warrener – The Man Behind Our Rotary Badge

After graduating in 1977 and commencing his Chiropractic practice in Paisley St, Footscray, Allan Warrener, commenced a research program while assisting renowned athletic coach, Franz Stampfl and his group of elite athletes at Melbourne University Oval.

Besides treating their injuries, Allan’s main objective was, how can we bring the body to function with maximal efficiency to assist athletes to perform at their potential?

This objective has guided him through the years, culminating in the development of this exciting Vortex Energy Therapy program with simple self-help techniques for everyone.

Based on his decades of studying how our bodies and brains work, he examines the body for what it is: a biological, multidimensional computer. Its surface is a computer screen, with numerous points through which information can be accessed as an aid to diagnose ailments.

For the body and brain to work properly, its systems must function in harmony. By understanding how they interconnect, you’ll be equipped to:

• develop better posture and synchronize movements; • avoid environmental factors that can hinder the body from reaching its potential; • cultivate a positive self-image that promotes better performance; • steer clear of negative thoughts and feelings that inhibit success.

You’ll also learn how to boost the flow of energy throughout the body, eliminate stress, breathe properly, and improve muscle strength.

Take control of your life and boost your emotional and physical health with the powerful insights and proven strategies in Peak Performance, Enjoyment, and Well-Being.

Allan Warrener is a chiropractor and an accredited track and field coach. He developed the Peak Performance, Enjoyment, and Well-Being program after being invited to assist an elite group of athletes at Melbourne University with injuries, balance, coordination, movement, and muscle strength.