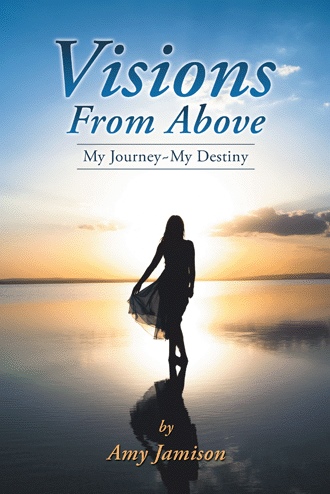 First time writer, Amy Jamison, recounts the story of her death experience in nineteen seventy-six from a collapsed lung, resulting from walking pneumonia. This amazing novel, a true story, describes Amy’s out of body trip to Heaven, where she encounters a dark entity, two angels, three spirits of deceased relatives and “Jesus”. This story includes her gift of visions of future events, involving immediate, family members. These visions begin in nineteen eighty-one and at first, Amy is not sure what she is supposed to do with the knowledge, as they frighten her. There are visions of her children, insect infestations, death, good and bad spirits, a fire, a disappearance, a stabbing, visits from passing relatives’ spirits, as well as a message from God, through a visiting minister. It also, includes an unspeakable vision of her daughter and her daughter’s boyfriend. The elders in heaven test Amy and if she passes it, she will learn the identity of her birth father. This story also, includes a surprise ending, with a vision for Amy.

Amy Jamison grew up in the Catholic religion, on a small island in Texas, along with her other four siblings, three brothers and a sister. She was the only child raised, but not borne on the island, during an era of drugs, alcohol and abuse. Amy was not able to acknowledge mediums and the abilities to foresee future events, until after her death experience in nineteen seventy-six and a special message from God in nineteen ninety-two. Amy began to explore many other religions, as her Catholic religion was no longer satisfying her questions nor fulfilling her inner peace. Next she attended the Episcopal church, experienced a few personal tragedies and later became spiritual.

After graduating high school, Amy traveled with her best friend to a large city in Nevada, where she met and married her children's father. Two years later, she and her husband moved to Arizona, where they attended and graduated from an advanced studies school. She majored in Natural Resources and French. Later she learned to read, write and speak Arabic, as she and her spouse were preparing to move overseas to a Muslim country, to work for a major oil company in nineteen seventy-seven. Her spouse was in Marketing and she was a Dental Assistant. Amy worked for this company for six years before returning to Texas with her two children in nineteen eighty-one. Shortly after this time, Amy began to experience "visions" of future events of her immediate family members. She revealed these events to her family, even though they all called her "crazy". In nineteen ninety-eight, Amy moved to a small, college town in northern California, where she was joined by her youngest daughter, whom required some specialized, medical treatment and surgery. In the year two thousand, Amy retired from the Dental field after twenty-six years, became a Care Provider for the elderly, a Medical Assistant and a Nanny/Housekeeper. In two thousand and six, Amy moved to a college town in Arizona, to be near her son. Amy is currently single and living in Phoenix, Arizona. Amy's passion has always been writing and she has always dreamed of publishing a book. Her goal is to tell others of Heaven, our creator, angels and our loved ones' spirits there. Amy believes she was sent back to fulfill her life's purpose, which God bestowed upon her. At first, Amy was confused and frightened of the visions. She did not understand what she was suppose to do with the knowledge. These visions keep repeating until they are revealed to the individuals involved. Sometimes these visions occurr only once, prior to their occurrence. Recently, Amy had her first vision of herself, which is still in progress. Amy has been through many personal tragedies,but her spiritual beliefs and faith in God have carried her through them all and made her a stronger person. Amy believes we all have intuitive powers to connect with the spirit world. Life happens, free will reigns and we are not at peace with ourselves and others, in order for this connection to occur. We have to be free of all negative thoughts and actions. This is no easy task and it takes a great change of personality and thoughts. She believes everything is possible through God. Amy has recently setup an ad in her area, to connect with other individuals, which have had death or near death experiences or have experienced beings of light. Amy's goal is to organize a support group for these individuals to share their stories with her and help them and her heal in the process. Amy believes the more she and others similar to her, share their stories, the more likely the world will be able to accept the reality of visions, physics, mediums and the spiritual world.