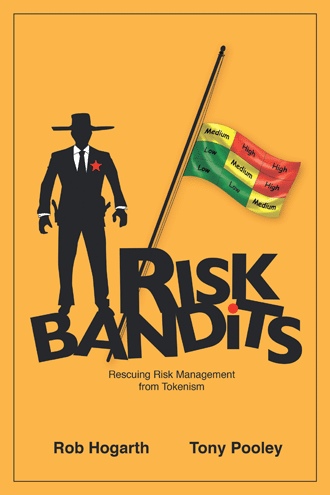 “It is not often that I read a book on risk and find myself saying ‘here, here’ as I turn the pages”
—Jean Cross, Emeritus Prof. in Risk, University of NSW
“I think this is an excellent book and industry is long overdue for the truth, I can’t wait to get my risk managers reading it.”
—Shayne Arthur, General Manager Risk at Orica
“This is a ripping yarn, I was keen to provide feedback before boarding in case I was the victim of a low probability event over the Atlantic.”
—Norman W Ritchie, vPSI Director
“It is an easy read, written in a journalistic style and certainly comprehensively and competently covering the topic”
—Barry J Cooper, Prof. and Associate Dean at Deakin University Business School

Rob Hogarth is a non-executive director with over 40 years corporate experience in both Australian and international markets, including 29 years as a partner of KPMG focusing on business risk. He is a Chartered Accountant and sits on multiple boards.

Tony Pooley is a risk advisor to industry and government and an associate professor in risk at the University of South Australia. He is an engineer and was an operations director in the oil and gas industry before founding Australia’s first quantitative risk consultancy.