The Absurdity of Pride and the Peace of Humility

How We Can Reestablish Our Relationships with Other People, Other Groups, and Other Species to Live Peaceful Lives and Avoid Extinction 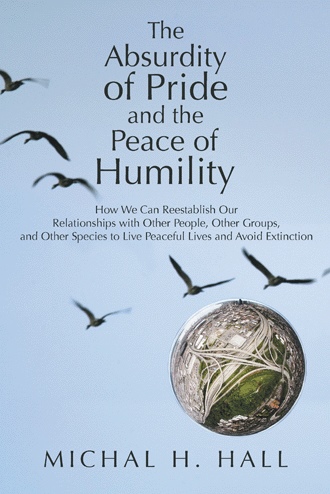 Honestly Facing the Pride Around Us and Within Us
Around Us
I know I’ve said it before (if fact everything I’ve said before is about this) that the first thing we have to do to reach humility is to become aware of, and fully accept, the tidal web of pride that is in everything. I have also said that pride is touted as being evil in most of the world’s religions but is still ignored. Since even society has now totally ignored humility, at this point in time no one has a clue. Nobody realizes just how consumed we are by pride. We have to step out of the blind, escapist, arrogant mindset that surrounds us, and join in the quest for the acceptance of the truth of our pride-filled, dying species.
As you said, we’ve already talked about that over and over. Why do we need to address it now?
Let me just make a few comments that need to be repeated, ok? The first thing we have to do if we have any hope of moving toward humility is to pull our heads out of the sand. We have to face that pride is causing our relationships to fall apart. We have to face that we are awash in pride’s warped and lying myths. We also have to accept that unless we find some way to release ourselves from pride’s tragic evolution, we will never know the joy, freedom and security of real humility, and our species (and most other species on the Earth) will die.
Ok, ok Hall; I know all of this. Tell me something new.
We must first identity the pride, but we must also identify with our hidden humility. When pride departs us, humility is what’s left, and as it peeks out into our lives, it will heal us. It will bring us back into sanity. I believe that even a minimal appearance of humility has amazing powers to calm, revive and renew. It can certainly begin the restoration of our lost relationships to ultimately give us a future.

So as pride departs and we take our identity away from it, humility just naturally appears? Is that what you’re saying? That sounds awful easy to me. There must be more to it than that.

You’re right, McNair, because we are now not just submerged in pride; we are pride. That’s who we’ve become. However, as you just said, when pride leaves, humility is still there. It’s always been there, and it will always be there because it’s what’s natural; it’s what’s real. Humility has not departed us; we have departed humility.
All I’m trying to say is that the more we can identify and recognize the pride that is everywhere around us, the more we can begin to move into humility. It’s obvious, isn’t it? The first step in moving into humility is to see, identify, and accept that pride is everywhere.

Yes Hall, you’ve made it more than clear by now. Please move on.

Pride is also within you and within me. We are eaten up with it. There’s an old saying that you have to look within, before you can really look without. It’s one thing to face pride theoretically on the outside; it’s quite another to face it personally within ourselves. In order to do anything about it, I must be able to see it and identify it in myself. I must face it there if it’s ever going to move out of my identity. And that’s not easy because we’re talking about altering our complex computer brains. We’re talking about dealing with the psychological damage of pride that has altered:
Our inherited memory (often called inherited consciousness or
conscious genes),
Our early childhood development (in our observing and being taught
by our parents and others),
Our later childhood development (in our socialization, education,
group formations, and loyalties),
Our adult development (in family, religion, nation, business,
housing and wealth).
In all of these areas of our brain, pride has taken over in the same way that aliens or demons took people over in those old movies about invaders from outer space, or demons in exorcisms. Each of us is truly possessed and ruled by the emotion of pride.
We must first face that there is nothing in our psyche that has not become entangled, and that pride is now the underlying emotion that drives our thinking (and our actions). We are not talking about icing on the cake here; we’re talking about the main ingredient.
Our brains are clogged. Our presuppositions are glued. Our identity is altered. Our future is bleak. Pride is a basic, fundamental, controlling part of who we are. Thus, to try untangle it is nothing less than monumental!

You make it sound hopeless.

No, I know that it can be done because I’ve seen people who’ve faced their pride and dramatically altered it. I’ve seen people who’ve actually found ways to center their lives on humility/connectedness. Some that I met were monks or nuns. I came to know them as I was researching and studying the world’s religions. In speaking to one of them (a Buddhist monk in China), he said that he had moved out of the violence, fear and isolation that was previously his life to seek humility and peace in a community of people who had released themselves from pride’s illusions.

Ok, ok, but how would I go about looking for this pride in myself? I don’t think I’m an especially prideful person.

No one thinks they’re prideful, McNair. Pride is so much a part of us that we have lost our ability to reflect on it. But let’s try to put into words how just prideful you are. Let’s see. What can I say?
Ok…when you get up in the morning, who are you? What are you thinking about? Who are you concerned about? Isn’t it true that your answers will always be “me”? Our world revolves around this “me”. It revolves around what’s best for me…what I need…what I want. Isn’t that true McNair?

Well let’s reverse it. Can you imagine a scenario where everyone would be equally as concerned about all the other people in the world (I mean about every one of them) as we are about ourselves? Can you imagine where you would love every person on the Earth just as much as you love yourself…where everyone would be considered family?
But let’s take it even further, McNair. Can you imagine being equally as concerned about all of the other species on this planet as you are about your own species, and even yourself?
Can you imagine that McNair, because if you can, you will have begun to see just how far we’ve evolved out of humility, and you will also see just how difficult it will be to come back to who we really are. If we had originally evolved into our natural humility (thinking the way I just mentioned), it would be easy for us. It would be natural for us to be just as concerned about everyone and everything as we are about ourselves.

Yes…but isn’t that going too far? I mean, that really is hard to imagine. Are we really that far off-course?

Yes we are McNair, because we are all tied up in pride’s insane illusions of self. These lies tell us that we are the only entity that matters on the Earth, and, in fact, we are all that matters in the whole cosmos.

After several years of research into the new discoveries of science and cosmology and the new translations of the world’s religions, I have found that we are not only going extinct, but that we are the ones doing it through pride and arrogance. We as a species have developed an addiction to this ugly, disconnecting emotion. Totally lost to us is the unifying, sustainable emotion of humility. Clearly, unless we can recover humility’s natural state, we will continue in the violent, frightened, unjust lifestyle of pride, and we will force our own species—and many others on the Earth—into extinction. This book maps out our personal, group, and species pride so there can be no doubt of its powerful influence in—and lethal power over—everything about us. A study of how we can get out of pride and into a state of humility occupies most of the book because that is what we must do right now. If we are to live enjoyable and meaningful lives and have a future, we must throw off pride and enter into humility. This book is a map, guide, and call to hope for our joyful and sustainable future. It’s a call to come out of our slavery to self to see and embrace other humans, groups, and species of the Earth. In this new state of humility, we will be released to see ourselves not just as citizens of the Earth, but as citizens of the cosmos. In humility, we will discover that we are not the center of anything but an important part of everything. We will throw off things like pride’s violence, illusions of control, worry, fear, anger, fighting, comparing, judging, competing, and taking everything personally. We will take on humility’s laughter—especially at ourselves—love, justice, peace, forgiveness, identifying with and appreciating everything, and being all-inclusive. The natural thing would have been for us to evolve into humility. It is the only way that any reflective species in the cosmos can ever hope to survive and flourish.

The author began his formal education with advancing bachelor, master and doctor’s degrees. He became a progressive Presbyterian USA minister serving imaginative congregations for 40 years. He also taught in colleges and seminaries, did numerous television series on philosophy and religion in Atlanta, and produced television specials for PBS and AIB centering on the life and writings of Teilhard de Chardin. Over the years, he began seven large organizations to meet human need. Upon retirement, he took two years to study the amazing surge in scientific knowledge and the wisdom coming from the recently available translations of the world’s religious writings. In his travel and research, he found himself face to face with the fact that we as a species are not only going extinct, but also we as a supposedly intelligent species are the ones doing it. He now spends his days lecturing and writing on how we can release ourselves from pride’s destruction of our individual, group and species relationships to move into a real, sustainable state called “humility”.