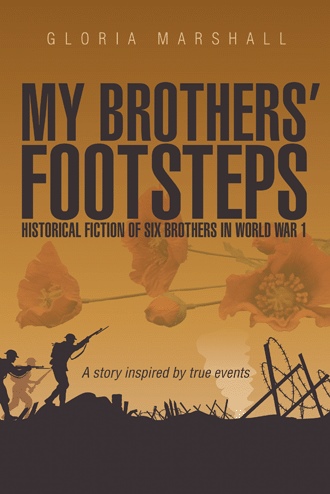 My Brothers’ Footsteps will take you back one hundred years in Canada’s history. Young men and women answered the call, boarded ships, and sailed to the battlefield in Europe. The unspeakable horrors of war awaited them as they fought bravely for their king and country. My Brothers’ Footsteps take you into the rat infested trenches, the battlefield riddled with shell holes, and the pain and suffering of the wounded. Many never returned home, and those that did were broken in body and spirit. This was a time of fierce loyalty and pride. The Great War forged a nation but it came with tremendous sacrifice. This is a must-read for every Canadian, whether young or old!

Gloria Marshall
is a published poet and artist and the daughter of a WWI and WWII veteran. A soldier’s hundred-year-old war diary prompted her to research the events in WWI that he had recorded. His footsteps led her on an amazing journey.

Gloria lives in Halifax, Nova Scotia. She retired from a twenty-five-year career in office administration. She enjoys spending time with grandchildren and pursuing her two passions: writing and painting.