The Story of the Brown Cow 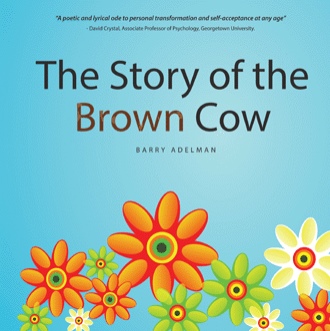 Once I was squirrel and then I was a dog.

I turned into a human, oh that was worst of all.

Cause when I was a human...

Co-Founder of Music for Humanity, Barry Adelman, a child of the ’60s, has transformed his captivating children's song, with the help of graphic artist Martin Dominguez, into a book children of all ages can enjoy to live in the present, in the now. All sales of this book are donated to Music for Humanity, a 501(c)3 charity.

Barry Adelman, graduate of the University of Michigan and entrepreneur, is a singer/songwriter with over one hundred original songs. The Story of the Brown Cow was originally a song. With the encouragement of others, it was transformed into this book.

Barry Adelman was born in Brooklyn, New York, and now resides in Walker Valley, New York. He is president of Outdoors, a retail clothing store in Chester, New York, started in 1975. He is the co-founder of Music for Humanity, a 501(c)3 charity formed in 2005; he donates all money earned via music, including sales of this book, to Music for Humanity. The mission of Music for Humanity is to positively transform the world via the emotional and spiritual power of music. MFH has grand plans, but to date they have given seventeen music scholarships to youngsters who want to continue their music education at an accredited college or university but need financial help.