Godspeed: Riding Out the Recession 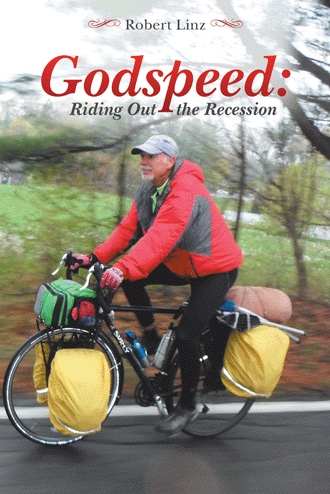 As I turned my bike around to head back out to the main road, I heard a pleasant “hi, how ya doin?” That greeting came from a woman who had obviously been working hard at moving a load of sand and gravel piled in her yard beside her garage. After commenting on her willingness to take on some hard work on a hot afternoon, I shared with her that I was looking for a site on the lake before making a round trip to Thruston for dinner supplies. After trading stories, mine being about riding out the recession for a year and hers being about her project of building a rather luxurious coop for her newly acquired chickens, I found myself asking about pitching my tent in a shady spot in the back corner of her lot near the wood pile. Sherry smiled as I asked, and expressed that she thought that sounded just fine as long as I wasn’t an “axe murderer.” I laughingly assured her that I had left my axe at the previous evening’s campsite and that I shouldn’t be a threat. Chuckling, she said that she would check with her husband before saying yes to that request. After touching base with her husband, Randy, Sherry told me that I was good to pitch my tent. She added that I could do so as long as I didn’t go into Thruston for supplies insisting that I have dinner with them that evening. Her dad was bringing some of his famous local pizza over this evening and she and Randy wanted to share that with me for dinner. I happily accepted her offer. Since it was only 1:30 in the afternoon I offered to help her work on her chicken coop after setting up my tent and changing into some work clothes.

Sherry accepted and we papered the roof of the chicken coop, shingled part of it together amidst conversation about family and friends, and I finished by cutting and installing a door on the coop for her. Sweaty but satisfied we finished that afternoon with a couple of cold beers as we chatted and admired our work. Sherry commented to me that she wouldn’t even have been around at the time that I had showed up had not her son’s hockey camp that week been unexpectedly canceled. She added that they spend a lot of time in Cincinnati as well since much of her son’s time spent playing hockey occurs at rinks in the Cincinnati area.

Are these things just a matter of coincidence or not? It is up to each of us to decide for ourselves about that. In my case, I think not!

Godspeed: Riding Out the Recession chronicles the author’s experience of a solo bicycle trek of over 14,000 miles around the USA. Departing from his home in Cincinnati, Ohio on Memorial Day of 2011, he returned just over a year later after promising his Dad that he would be back home in time to celebrate his 90th birthday.

Seeing adversity as an opportunity, the journey was his response to the crippling effect of the recession upon his work as a carpenter/contractor. Renting his home and shutting down all of his expenses, he created a food and lodging budget of $15/day. Maps and smart phone were the major expenses of his experience.

“Wild camping” his way around the country, he shares the curious and compelling nature of how people and events showed up for him along the way. Was it simply a journey or a journey created? At the very least it became a pilgrimage that confirmed many of his core beliefs and, in subtle ways, changed others.

Robert Linz is a carpenter/contractor with a degree in Psychology and a longtime interest in Philosophy and Science. He grew up on the west side of Cincinnati, adventurously spending his youth on the seat of his bicycle.

Always willing to pursue an alternative way of making the practical aspects of his life work, he shares his home with students and faculty from around the world who are drawn to the academic life associated with the University of Cincinnati and nearby Miami University in Oxford, Ohio. He is the father of three daughters and lives in the community of Clifton just north of downtown Cincinnati.