The Gods Must Be Us

When Fiction Becomes A Miracle 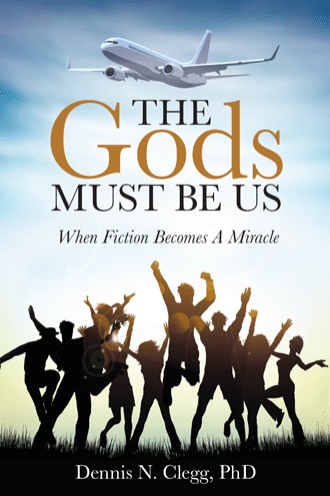 Jaing couldn’t hold back: “What are you talking about? I thought those things were just a myth.” All of a sudden, a little old man in a wizard’s cape appeared between the massage tables. “Well, right you are!” he said.

Everyone stepped back, with eyes as big as saucers. Redbird jumped back. The old wizard just laughed.

Then a younger woman’s voice said, “We thought if we let you know we’re here with you and gave you a good idea of who we are and what we are like, you would know the team you’re working with a little better.”

Everyone turned to see a middle-aged African woman standing near them. She continued, “You’ll probably learn a lot more about angels by meeting us than trying to get an explanation from someone.”

The old wizard said, “Don’t believe what you see right here. And don’t believe anything you’ve ever been told about those of us who are not in bodies. Through the ages, there’s been a lot of different names for us. As mankind has told and retold the stories, the legends are much bigger than life. Besides, what was left out of the stories was who really had the power, and who were the helpers?”

The woman added, “We can take any form we want to, to be visible to you. Next time you see us, you will be looking at another form, but you will know it is still us. So about these angels. That’s a really old legend that started from people who saw helpers appearing floating in the air, who really didn’t know how to explain it to other people. So they created the idea of people with wings, and somehow the name ‘angel’ got attached to that. So for people who believe in that idea of angels, it’s easiest to appear before them with wings. They don’t get so frightened, and for them, it’s a sign that the visitor comes representing the highest. It’s something that works, but it also creates some confusion.”

The old wizard said, “You must know very clearly just how powerful you are. We can’t be letting you think we are the beings of legend. You have got to be in your own power, and you’ve got to know that we are simply your helpers. You make the decisions, you do the asking, and when you’re very clear about what you’re asking for, it’s easy for us to help you.

“There are times you won’t have time to ask somebody else what to do. If we appear to you in the legendary forms, and you think that we are the ones who have to make the decisions and tell you the right way to go, that could make all the difference between success and failure of your mission. Things are just going to happen too fast to seek direction outside of yourselves. We’ll do our part, but we are not the authority, and we are not going to be taking your power away from you.

The woman interjected, “He’s not saying it all has to come from you. What he’s saying is that you are the receiver. As the receiver, you take in all the information available in the moment, including telepathic input. Then you decide what to do with it, what help to ask for, and with your physical strength of being in a body, you intend, and energy accommodates. The more of you who work together with the same intention, the more clearly energy gets the instruction to accommodate. And we will help you with that.

The wizard quickly added, “So that’s just about as close to instant as can be. It isn’t even necessary to formulate words in your mind. The inception thought that makes the difference preceded the words already. And you’re doing that will make things happen, because formulating the words in your mind only detracts from the purity and strength of your creative thought.

“It took time for you to learn language, but you started with just pure thought. Remember, you thought before you could speak about what you thought.”

Ashwini asked, “What are we supposed to do?”

The woman said, “You are a good example, Ashwini. You always need to be in a state of questioning. That keeps your channels open to taking in information. That’s another reason the inception thought is so effective in its instant purity. Your energies need to be back to questioning and receiving. Once the decision is made, adding any ritual only spends precious time and takes energy away from questioning and receiving. In between, you decide what you are receiving, and you make a choice. I want you to know that you are always directing energy, and energy is accommodating you. You would have known that all your life if your thoughts were not so scattered and troubled.”

The plane shook violently, and the people in bodies were thrown around the room. Then normal flight resumed.

Checking in with each other, everyone was well enough off. No one needed first aid. They returned to the visitors, more intent than ever to learn whatever they had to offer.

Scera wondered why they made such a big deal about defining themselves. She didn’t care as long as they were helping. “What about all the people who are dead and suffering? Who is helping them?”

“There are more beings who are not in body, ready to help you, than you can possibly imagine. And don’t worry about those who recently left their bodies; they are really concerned about you and ready to be focused to help you with what you need to be doing as you carry out your mission. Nobody ceased to be. They only changed their form, their energetic expression. They are more present and with you than they were when they were in bodies. Bring your energies back to loving them, to feeling connected with them, and to giving them the information they need to be of assistance to you.”

The old wizard said, “You might think of yourselves as kings and queens, and they are your subjects, eager to carry out your wisdom.”

The third voice spoke from a body that looked like a woman of the Amazon Basin. She said, “Gabriel, you’ve made a good choice to go south. After you’ve cleared populated areas of Central America, go Eastward over the Amazon basin of Northern Brazil. In Brazil, you will join with people who have been doing research and developing methods for preventing problems from radiation. It’s been very secretive. In the wrong hands, the information would help destructive and evil people to use atomic weapons while protecting themselves. If they thought they could do that, without paying the price themselves, they would do the most vile crimes against nature that have ever been done. As you know so far, no one can use nuclear weapons on someone else and not also use them on themselves, and that has been what has prevented nuclear war until now.

“Religious megalomaniacs have set off the nuclear arsenals.”

“We want you to know,” the old wizard said, “there still is the possibility of surviving this holocaust; humanity may continue better than before.”

The African woman said in conclusion, “You will find answers within you.” Then they all vanished.

Fiction often introduces us to possibilities that redirect how we live. The enjoyment of writing a novel of alternate possibilities for how doomsday predictions might play out stepped into an enormous real life challenge as fictional possibilities were put to the test in reality.

The information carried in these scenarios of how survivors overcome themselves to access their original abilities is entertaining; yet for those ready to un-morph into the divinity of all of us, it is a manual for transformation.

Dr. Dennis loves weaving life experiences and love of flying, into stories that inspire practical mysticism. A Ph.D. in alternative healing, energy medicine facilitator, energy psychology facilitator, sexual health facilitator, clairvoyant, psychic, and dowser; he shares his expertise with the power of our core relationship with energy and working with non-incarnate beings.

His esoteric nature is grounded and balanced by being a private pilot, boater, electrician, mechanic, builder, repairman, and small business owner. He embraces that which is practical for everyday living from the part of life commonly called spiritual, yet for him, everything is spiritual and duality (separation) is a state of mind.

He presents and facilitates on a variety of subjects, further developing insights, principles, and competencies expressed as the lifestyle incorporated into The Gods Must Be Us.