So, Why Become Vegan?

A. Nutritional Reasons B. Spiritual Reasons C.Environmental Reasons D. Ethical Reasons E. All of the Above 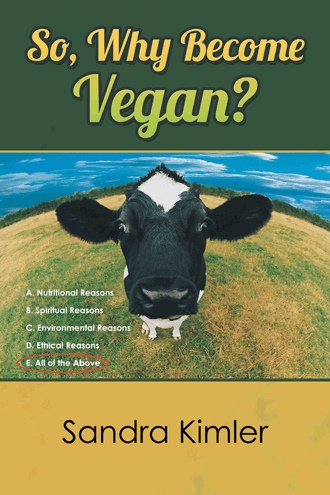 MY PREVIEW TEXT IS:

A vegetarian does not eat food that directly involved an animal having to be killed to consume it. A vegan’s primary focus is to be compassionate to all animals therefore they do not eat anything that has an animal product in it.

A vegetarian may still eat dairy, eggs, honey, rennet and gelatin. If you eat fish you are not a vegetarian, you are a pescetarian. You eat no meat and poultry but you do eat fish and seafood. Where vegetarianism is the practice of excluding all animal flesh including fish, seafood, crustaceans, game and poultry, veganism is far more strict and a lifestyle rather than a dietary choice

A dietary vegan does not eat anything that has an animal product in it. An ethical vegan follows a vegan diet and also includes the vegan philosophy in every aspect of their life. They do not wear fur, leather, wool or silk. They do not use products that have been tested on animals. They do not condone hunting, fishing, dog/horse-racing, animal medical testing, circus animals and zoos.

When people ask me "what made you a vegan?" I say I feel that I was born that way. What made you a meat eater? Think about it. I think we were all born vegans and our parents conditioned us to eat meat. We are taught from a very early age “what” to think rather than “how to think for ourselves”. Take a moment to visualize yourself walking through the woods. You are enjoying the peacefulness and feeling close to nature. You see a squirrel. What is your reaction? "Oh, how cute is that" would be the normal response. As you walk on you see a blackberry bush. What is your reaction? "Yum" Our instinct is to pick the berries and eat them. Our natural instinct never made us want to eat the squirrel. Think about it.

Have you ever observed a child's behaviour at a ‘Kids Animal Farm’? As parents we take our children there so that they can pat and feed the calves, lambs and chickens. The children, in their own special way, want to be kind to the animals. They have this need to hold them. It is almost obsessive behaviour. Hopefully, for the animals sake, the parents will guide the child how to be gentle in their loving handling of the animal. The need to be connected with the animal being is very strong. It is like they need to be with a life force. Why is it that they want so badly a dog or a cat, a guinea-pig or something to love? It is their natural instinct to want to be connected with a life-force.

If we would ask a child at the animal farm who is holding a chick: "Would you like to eat this chick?" What do you think the child would say? Well, the child probably would not say much because he would be in shock. Tears would swell up in his eyes as he runs to his parents crying "Mum this woman wants me to eat the chicken!" Well, my guess is that the child already does and it was his parents who cleverly disguised it as mince or sate or a slice on his bread. Once our bodies and taste-buds are accustomed to eating meat, we become meat-eaters wondering how those crazy vego's do it. After all we are meant to eat meat, aren't we?

Do you have any memories of when you were a child walking through the vegetable patch with an adult picking beans, strawberries and tomatoes? If the answer is Yes, how did it feel? If the answer is No, how do you think it would have felt? Good, hey?

Now, do you have any memories of an adult taking you through an abattoir? If the answer is No, how do you think it would feel? If the answer is Yes, you are probably a vegan fighting for animal rights. So what changes? As children our bodies are pure with pure clean cells.

It is our parents who introduce death to us in the form of cooked meat. It is heavily disguised with salt and sauces, in shapes, as deepfried food or on a BBQ dripping in tomato-sauce. In nature, all omnivores and carnivores eat their meat raw. Eating raw and bloody meat is disgusting to us so we cook and season it. Human meateaters do anything to get rid of the raw meat taste. How do you think raw meat would taste? Our palate would not approve. Slowly our cells lose their pureness and our tastebuds take over as we become detached from the animals we were once so fondly connected to. Eating meat is considered an ethical, moral and traditional issue. To go against any of this is like an insult to our mothers. We even make up excuses for the slaughter of animalbeings. We say: "We need animal protein and we need iron". “God created animals for our use” is another favourite saying.

How about "We must take the life force of a goat by slicing open its neck while facing Mecca otherwise we don't go to heaven"?

Who made up those rules? How about: Thou shalt not kill? Oh, it doesn't apply to animal beings.

How about: Wish for others what you would wish for yourself. For example: shelter, food, kindness, no fear, and a safe place to reproduce naturally. Sorry, but this only applies to human beings, not animal beings. The men who made up these rules all those centuries ago must have really known their stuff. They clearly separated the needs of humans from the need of animal beings.

What about our dog or cat? Would you eat them? Why not? Is it because of the emotional and physical attachment? Well, people do eat dogs in places where they don't eat cows because of their attachment to the cow.

Can you see that we make all these rules to suit ourselves? That is why there are whale lovers and whale-meat lovers. Why is the killing of a whale more horrific than the killing of a cow? Well, because we want to watch them in our oceans. We are attached to what our needs are. Lucky whale! In some parts of the world horse is eaten. Instead of Pony Club, they have Pony club sandwiches.

There are patterns in human behaviour and they are all taught when we are young children. We learn to attach ourselves to what we are told our needs are and we learn to detach for the same reason.

While walking on a beach in Bali, a friend asked me – “S0, why did you become a vegan?” It was at that moment that I thought to write this book. The answer to that question is a combination of everything that I had come to understand in my life. We all need to become more aware of the impact our choices are making upon ourselves, the earth and every living thing on it. The health and well being of all living creatures depends on these choices. A vegan lifestyle is as cruel-free as possible, environmentally friendly and extremely healthy. This book will take you on a confronting and informative journey from which there may be no return. Stimulate your thoughts, challenge old belief patterns and allow your awareness to expand and the path will appear, and so might the question – So, why become vegan?

With a growing awareness and several years studying nutrition and iridology, Sandra shifted from vegetarian to vegan, became a passionate animal rights activist and decided to write it all down for her three children. Always asked why she became a vegan, Sandra has responded with this revealing book.