100+ Successful Women Entrepreneurs Share Their Best Tips on What Works, What Doesn't (and Why) When You're Launching a Business and Designing a Life You Love 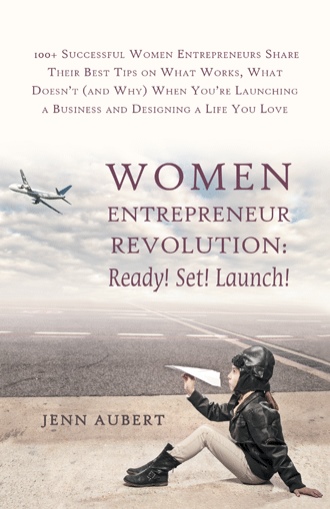 Figure It Out
“We’ll never survive!”
“Nonsense. You’re only saying that because no one ever has.”
– William Goldman, The Princess Bride

No one who launches a business knows everything that they need to know to begin. Even if someone has an MBA, it doesn’t mean that she will know how to hire the right people for her team, understand how to ship her product overseas, or will know her way around a manufacturing floor. For many women, just learning the financial aspects of running a business was a challenge that needed to be addressed immediately.
Known as one of the top female chefs in the country, Traci Des Jardins, is a classically trained chef and has been trained by some of the best chefs and restaurateurs in the world. When it came time to launch her own restaurant Jardinière in San Francisco in 1997 and as she expanded her restaurant empire, raising money was her biggest challenge. She had no formal training in business and leaned on a business partner to help her figure it out. “One has to have a basic understanding of all aspects of the business so that oversight is possible,” she shared. Similar to the restaurant environment, business as Traci puts it is an “evolve or die” way of life. One important aspect she has discovered along the way is that you cannot micromanage your way to understanding the business either. You need to have trust in that the team you hire is doing good work.
As an entrepreneur and business owner you have to embrace the learning process because it is constant. You may be doing tasks that you never thought you’d be doing but, especially in the early stages out of necessity, you take them on.
Kimberly Wilson started her business out of her living room. In 1999, she offered yoga classes out of her tiny apartment in Washington, D.C. She eventually outgrew her space and started opening studios in town. She also launched an eco-fashion line, created a foundation to give back to causes she believes in and wrote three books all while pursuing her Master’s degree in Social Work. What she found the most challenging when starting out was how difficult it was to focus on the creative aspect of her business – the part she loves. Like most entrepreneurs, you’re “forced to to be the jack of all trades and wear all the hats yourself” she reminisced. When she started she was in her mid 20s and her business was all-consuming. “On Friday nights when everyone else was out, I was recoding my website,” she recalled. She gave everything she had to her yoga studios and the business and years later it has definitely paid off. Her studio, Tranquil Space, was named among the top 25 yoga studios in the world by Travel + Leisure, she leads retreats globally and generously gives back to animal rights organizations through her foundation.
Both Traci and Kimberly value that they had to learn different aspects of their business because they are better equipped to understand the value of different roles, what it takes to be successful and are better able to lead those who take on that function. It has served them both well as they grow their businesses and expand their reach.
Entrepreneurs are natural problem-solvers. The mere fact that they’re solving a problem or providing a solution in the form of a product or service is a testament to this. But it goes even further as their problem solving skills are tested on an almost daily basis. Just because they don’t know how to do something doesn’t stop them from pursuing their dreams and getting the job done. Nearly all the women I interviewed noted that one of the largest challenges they faced was that they didn’t know exactly what they were doing. But, they overcame the challenge by simply figuring it out.
In her book Business as Unusual, Anita Roddick, the founder of The Body Shop shared that entrepreneurs have “A covert understanding that you don’t have to know how to do something. Skill or money isn’t the answer for the entrepreneur, it is knowledge: from books, observing and asking.” Roddick, who passed away 2007 was also an environmentalist and a human rights activist and was a pioneer in shaping ethical consumerism. She gives several examples throughout her book on how she made things work. For instance, everyone assumes that the interior dark green paint on the walls of The Body Shop stores was a reflection of being a “green” company. When she launched her first store in 1976, “green” was not a metaphor for the environmental movement. She simply used dark green because it was the only color that would cover up all the damp patches on the walls. Also, the concept of using reusable bottles was purely because she couldn’t afford to purchase enough to keep them in stock. “Every element of our success was really down to the fact that I had no money,” Roddick writes.
The ability to be creative in solving problems and looking for solutions where others might not look, is a valuable quality in an entrepreneur. As with Roddick, some of her early decisions were not necessarily about being eco-friendly, she was simply looking for ideas to make her business work on limited resources.

What can you learn from other successful women business owners and entrepreneurs? A lot more than you think.
Don’t you wish you could find the equivalent of Glamour magazine’s “Dos and Don’ts” section on business?
Most advice on small business and entrepreneurship focuses on the tactical and strategic aspects of starting a venture, often leaving the individual out of the equation. And yet, it’s the underlying personal foundation that is so critical to success. By gleaning insights from others and knowing the traits that successful businesswomen have in common, you will be firmly on the road to wild success.
This book takes a fresh and creative look at how identifying and utilizing role models can greatly benefit your business and life. Through interviews and research, author Jenn Aubert has identified the juicy traits, motivations, and personal styles of empowered women entrepreneurs and has distilled it down to what it takes to be a savvy and successful businesswoman on your own terms.
Part reference toolkit, guidepost, and friendly travel companion, this book will see you through the ups and downs of building your business and will serve as a constant reminder that if you can dream it, you can undoubtedly achieve it.

Jenn Aubert is an entrepreneur and acupuncturist with a bustling practice in San Francisco. Always in search of her next challenge, she is launching a company that will provide education, teaching opportunities, mentorship, and community for aspiring female entrepreneurs everywhere.