The Road to World Peace 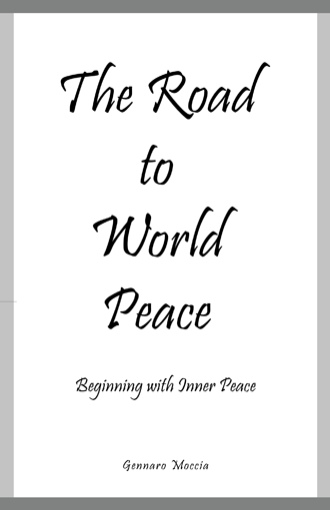 The typical life of a human being involves going through a blissful childhood, getting that peacefulness taken away, and spending the rest of that life attempting to find a feeling of happiness. Many humans aren’t able to see the simplicity of life because of all the complications they bring themselves into; mentally that is. Humans have a benefit of higher intelligence but we don’t use it to our advantage. We stop ourselves from being able to see the beauty of life. The fact that life is a gift and we take it for granted is enough for us to miss out in what the experience of life really is. Humans don’t walk around seeing the gorgeous nature around them or appreciating the simple things in front of them. Instead, they walk around with their locus of attention focused on preoccupations and the passing of time to the point where more than half of their lives is wasted away in analytical thought processing. The act of worrying is a building up of negative energy that empowers a thought to the point where it attracts such negative events to occur. Reality is just energy particles moving in perpetual motion. Our minds have a more profound effect on our reality than most people realize. Not only is our perception altered by the thoughts in our heads but our minds can change reality. When there are zero thoughts in our heads, for instance, our reality is more vivid. Sounds are louder, colors are brighter; everything becomes enhanced if we focus all our attention on it. Children experience this heavenly state of consciousness until the ideas other people bring in their heads dull up their reality. It’s only until after a child gets made fun of that he feels that he needs to act a certain way to be accepted. It shouldn’t be that way. It’s not right that everybody in this world is purely authentic yet we all act in a fake manner that everybody refers to as normal. It comes to the point where people don’t accept themselves for who they truly are because other people made them feel it wasn’t right to be that way. Usually people will envy those who remain in absolute inner peace and will try to bring them down. The vicious cycle seems endless. It’s only after people love themselves that they will find the motivation to project nothing but love. Nowadays human beings project mostly their own insecurities. People’s fears, feelings of inferiority, and resentments are what provoke some people to feed their evil side rather than their good side. Many people don’t realize that we are all one huge family. In fact many people would refer to the idea of everyone being a big family as “stupid” or “gay.” And that’s what’s wrong with this world. The idea of everybody being happy or one person being too happy is referred to absurd. The only thing that’s absurd is everybody being forced to act a certain way to avoid being rejected. We all should love each other. We all should realize that inner peace is only the beginning. After we obtain the peace in mind we lost, there is journey beyond that. Through meditation, we are able to enhance the power of our minds. We can make ourselves stronger and stronger and stronger…spiritually. At first we are able to see the world for what it truly is. Then we are able to read people’s thoughts, predict the future, and alter reality with our consciousness. There could be something more than world peace. Humanity could experience evolution if they put their effort into the things that actually matter. The mind can evolve infinitely. The mind is the universe.

Spirituality changed my life. I obtained the peaceful mind I had lost as a child. I noticed how beautiful life really is and how complicated humans make it. Everybody seems to stress about situations they can’t change, concern themselves with the ways other people live, and ridicule those who are different rather than accept them. The truth is that everybody is in need of acceptance. We were all born purely perfect until society’s norms corrupted us and we felt that we needed to create a socially acceptable version of ourselves. It’s clear that somebody can’t act the way they did as a child throughout their whole lives without being disrespected. In reality people envy those who are happier than they are. Everybody labels everything and everyone else. There is not a certain way to do anything, and everybody is different. Morality is going down the drain, and people’s perspectives are distorted by the media, the government, and the close-minded way of thinking we are led to follow as we grow up. After having silence in your mind it becomes apparent why people do the things they do. It is lucidity. There’s so much more I want people to understand; I would love for everybody to be at peace with themselves. A collection of mind-opening revelations that will free the human soul and awaken the desire to spread peace and love.

Born in Venezuela and raised an only child, Gennaro experienced diversity after moving to Florida. As a typical teenager, he had self-esteem issues, depression, and feelings of inferiority. Starting at the age of twelve, he expressed his feelings through writing music. At the age of nineteen, after beginning the practice of meditation, he obtained revelations about everything that was wrong with human society and everything people needed in order to be fully content with themselves.