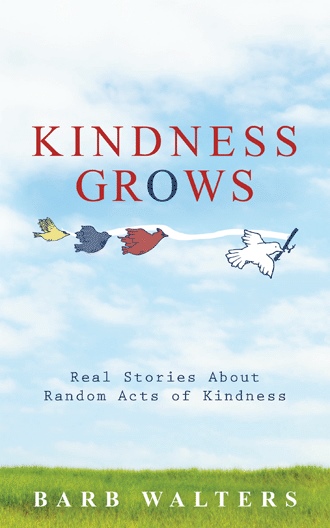 I stopped at a local coffee shop, and I ordered a small coffee at the drive-through window. The woman told me to pull around. I got my money ready and I put down my window. There was a young woman at the window with a big smile on her face. She handed me my coffee at the same time I handed her the money. She told me not to pay today, and I asked her why not. She said, "You're special!" She gave me a big smile and a thumbs-up sign. "I am?" I asked. She nodded and gave me the thumbs-up again. I smiled and drove away. I didn't know what was making me feel so good. Was it the free coffee, or could it be what she said?

I got to work and said to my friend, "Hey Jenn, I'm special!" I told her what happened and she smiled and said, "You are special!" The next time I saw my friend she said that she had something really funny to tell me. Apparently, the coffee shop was having a promotion of a free small coffee on the day that I got my coffee. All the small coffees were free! I thought about it, and I could not get over what a genius that young woman was. Instead of telling people the coffee is free and everyone gets one, she tells people they are special, smiles, and gives a thumbs-up sign. What a life lesson! After all, how often are we told that we are special?

"The true meaning of life is to plant trees, under whose shade you do not intend to sit."

It was May 1947, Philadelphia PA. I was a senior at Central high school, an all'boys school in the city. We were two weeks away from traveling to Washington DC for our senior class trip. We were all excited about the idea of leaving home and exploring another city. We all realized that this would be the last time that we would be together as a group with the exception of graduation. We were meeting in the auditorium to review the itinerary of our trip. One of the teachers stood up and said, "Guys I have some bad news. Two of the hotels that we are staying in will not allow our black students to stay there. " Unbelievably, in 1947, Washington DC was a segregated city. There were 20 black students in our class of 250.

Many students loudly voiced their disapproval: "Boo! That's not right!" One of the students shouted, "Let's cancel the trip!" Our teacher said that this was an option. He told us that there was no way we could find another hotel for all of us in less than two weeks. "We will take a vote," he announced. "How many of you think that we should cancel the trip?" Without hesitation, every single student raised his hand. All 250 students unanimously voted against the trip. The decision was swift and exhilarating. I looked over at one of my black friends and he looked proud. I felt the same way. It was a very grown-up decision. We were saying a lot about our values and our integrity. We chose to support an issue that was bigger than our own desires. I am sure that we would have had a great time if we had gone to DC, but nothing could compare to that feeling we all had when we took that vote.

My mother died of cancer when I was ten. It was a very difficult time for my family and me. A few days after the funeral, I returned to school. It was right after the holiday break, and I was not sure how people would act towards me. Some acted very sad and others just looked at me. Many would not make eye contact and everyone seemed awkward around me.

I had a new teacher who was filling in for my teacher who was on maternity leave. I didn't know this teacher and she didn't know me. She had a slight southern accent. She introduced herself to me and I told her my name. She looked at me with a big smile and said, "You are just the prettiest little thing! You look just like my niece Rosemary with those pretty eyes!" I smiled and she asked, "Is it okay with you if I call you Rosemary?" I agreed and took it as a compliment. That teacher called me Rosemary for the next few months, and every time she said Rosemary, I felt special. She knew about my mother's death but whenever she saw me, she had a big smile on her face. She would say, "There's my Rosemary." She made me feel like I could make someone smile. She made me feel good. That small act was what I needed. When I think about it today, it still touches my heart.

"Sometimes someone says something really small and it fits into this empty space in your heart."

-From the TV show My So-called Life

Random acts of kindness serve as a positive outlet in a world filled with negativity and challenges. Kindness feels good whether we are the giver, the recipient, or even the observer! In that moment of compassion and generosity, we are at our best. There is a connection, a magical synchronicity, and life suddenly becomes lighter and brighter. Kindness inspires gratitude, happiness, spontaneity, and it motivates others to be kind and pass it on.

These stories remind us that we all have something to offer. There are many opportunities every day to comfort and support others in seemingly small but significant ways. The impact and power of an act of kindness cannot be underestimated. In some cases, the outcome can be life changing!

Just step out of your daily routine a little bit and surprise someone. Share your kindness today and every day, and you too can make an ordinary day extraordinary!

"Kindness Grows could not have been delivered at a better time. We all need a reminder of an act of kindness, whether we are receiving or giving. The results are the same; our lives and the world become a more loving place to be. Your heart will open to Barb's variety of compassionate accounts by everyday people and remind us of the most important part of being human. "

“"I thoroughly enjoyed every story! These stories make you think long and hard about the life you are living and how you are living it. I feel like sharing this with my friends so they can have the same feeling I have now that I had the joy of reading it!"

Barb Walters has worked as a social service director, teen counselor, and medical office manager. She currently helps others through her cleaning and pet-sitting business. She enjoys cooking (a former Pillsbury Bakeoff finalist), listening to music, and writing. She lives in Pennsylvania with her husband, daughter, and two cats.