The Blue Knickers of Happiness 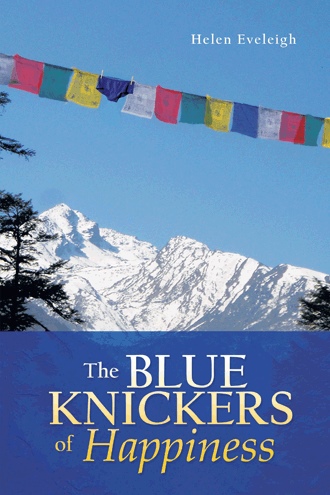 PART ONE – AFTER THE SILENCE

I never realised how many memories a scrap of cloth could hold, that a few threads of dyed cotton could tug so violently on my heart. Especially as I only wore it for a few hours, many years ago. Or did I suspect that might be the case? Was that why I hid the dress so deep in the wardrobe that I could never stumble across it by chance?

I’d read all about little black dresses in her copies of Cosmopolitan and spent hours daydreaming of how one day I would wear one to dinner in some fancy restaurant accompanied by a gorgeous hunk. I’d learnt they were the perfect outfit for every occasion, if accessorised correctly. I thought my first little black dress would become my best friend and I’d wear it until it fell apart. If only.

The last shopping trip we ever made together was in search of such a dress. It seemed the ideal choice for Andreas’ brother’s wedding. She wanted an outfit that would appear classy enough for his family to consider her a prospective wife, but at the same time so hot that Andreas’s eyes couldn’t stray for a second. We spent the entire afternoon dipping in and out of Ku’Damm’s shops. I loved watching her slip from her jeans into these silk and cotton sculptures. It was like seeing Cinderella transformed time and time again, but my feet were pleased when we found the perfect one. It was simple and chic at the front, not too much cleavage but cut perfectly to draw Andreas’ eyes to her curves. And if his gaze ever left these then the back was so cute and low he would melt for sure. We both agreed she had to buy it.

“Sweetie, if this doesn’t win his heart for good nothing ever will,” she said as she put a deposit down. “Now it’s your turn to look pretty.”

“You don’t actually need to buy anything, silly. It’s just for fun. I’m curious how they’ll look on you. You’re starting to blossom, beautiful one.”

So I tried a few on, and she was right—it was great fun.

“Wow, who’s this sophisticated woman? And where’s Sab gone? I’m impressed. You look more gorgeous than I’d ever imagined. You’re going to be a real heartbreaker you know.”

I instantly decided I’d ask Papa to buy the dress for my birthday. I desperately wanted to be the person she described.

I’m learning that life never turns out how you want, no matter how much you desire it. We had such big dreams that day, but in the end I was the one with the broken heart. As for the dresses, hers never made it out of the shop whereas I got a chance to wear mine far too soon. And my dress and me never became friends. In fact, following its debut I imprisoned it at the back of my wardrobe where it’s waited like a vulture for another dead body. And now it has it.

I still can’t get over the email from Luca. I knew India was dangerous. When I told Papa about my travel plans he warned me how many tourists die there each year. I can’t blame him for worrying after what happened to her, but it seemed so abstract. India’s such a massive place I figured some people are bound to have accidents, but I never expected it to happen to anyone I knew. At worst I thought one of our silent gang might be pushed to the edge of sanity. I never expected that one of us wouldn’t make it back at all.

It’s incredible that the dress still fits after all this time, although that’s not so surprising given that my body’s contours are still closer to the marshy mudflats of the Baltic than her fabled Alpine curves. But it looks so different somehow. It’s strange to think it’s the same person inside. Or is it? Am I really any stronger than I was? I haven’t been to another funeral since so have no idea how hard it will be. Will I dissolve in tears again? Have I developed enough wisdom and strength to get me through? I guess I’ll see tomorrow.

It feels like I’ve come such a long way these past few months, but the touch of this fabric on my skin makes it all seem so real again. I can almost smell my pain. I don’t want to regress but wearing this dress jolts me straight to the closing scene of “the movie.”

I’m sat at the table, looking as together as I can manage, refusing to cry. I think Uncle Michael was talking to me, but I wasn’t listening to a word he said. He couldn’t see that I was in a different universe. I was working out what deals I could make to bring her back, figuring who I needed to speak to—God or the Devil—and what they might demand from me. I’d happily have sacrificed the entire population of Africa if that was what it took to have her back in my life, even for a single day. I guess it’s a good job the universe ignored my pleas.

The hurt, the grasping was so strong those months. I could hardly breathe. It took so much effort and so many years to drag myself out of it. I know I’m not a hundred per cent there yet but I’m somewhere better that’s for sure. I’m just so fricking scared of being pulled under again. Be strong Sabine, be strong.

“Why would anyone choose to stay silent for ten days? These people must have messed up their lives big time to want to imprison themselves here.”

That’s what Jack, an advertising executive from New York, wonders when he unwittingly finds himself on a ten-day silent meditation retreat in the Himalayas.

This book follows the stories of five of the retreat participants and their searches for happiness, love, peace of mind, and enlightenment in India and beyond. Their interwoven paths are often touching and sometimes hilarious—especially when maggot-filled muesli bars, scorpions, dodgy gurus, giant tigers, a little fluffy duck called Eric, and the dreaded Death make surprise appearances.

The Blue Knickers of Happiness is an amusing yet insightful novel about what can happen when you stop and watch your mind. It explores how a little mindfulness can help ordinary people touch the extraordinary magic that lies within.

Helen Eveleigh left her career in sustainable development to explore Asia’s ancient teachings on happiness. This quest saw her live in monasteries, ashrams, intentional communities, caves, jungle tree-houses, and a Mongolian shaman’s yurt. She has undertaken numerous silent meditation retreats and learnt much from both holy men and travellers.