Why God Doesn't Hate You 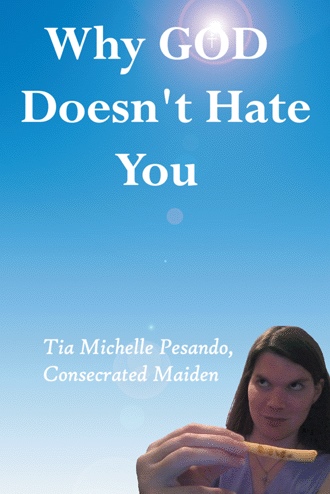 FOR THEM THAT FEARED THE LORD, AND THAT THOUGHT UPON HIS NAME
Introduction

A Dark Night of the Soul

Have we been betrayed by the God we love? As children, we received such comfort in knowing that our dark universe was created by a God who loved us; a God who would save us if we but requited His love, regardless of our social status, or our race, or our sex, or...or....
What has become of the Christianity of our childhood? No matter how war-torn, corrupt, or hopeless the world became, we always knew that there were those of God's Church(es) who believed in peace, charity, and love, and who devoted their lives to performing His perfect will. There are doubtless many who are still upholding such ideals, yet they are not the ones of whom we hear. Theirs is not the Christianity we are permitted to see, and we are at times left to wonder if it does still exist...or if it ever truly existed. If there was a time when “it was Love alone that made the Church's members act”1 and that time has not yet ended, why is it invisible to so many of us? Is it all to be disfigured beyond recognition by a few lines of ancient Scripture which seem to have driven the world mad?
Why do such lines of Scripture even exist, and why are they suddenly given such a position of importance? It seems quite apparent now, for example, that homosexuality is a trait with which one is born, one which is very capable of innocent love, and one which has remained for far too long in the darkness...yet Christians all over the world seem to condemn it. We were taught the teachings of Christ as the source of our understanding of right and wrong, and that the condemnation of the innocent is clearly wrong. Yet the hatred and condemnation of these innocents is said to come from God, as if it were some flaw in His doctrine of Love. Was the very basis for all the ideals of what was once called
Christendom – our very civilization – a lie?
How can we believe in a God of Love if He hates His own children for no reason at all..................but for their love?
“There hath no temptation taken you but such as is common to man: but God is faithful, who will not suffer you to be tempted above that ye are able; but will with the temptation also make a way to escape, that ye may be able to bear it.” (1 Corinthians 10:13, KJV)

The major criticisms leveled against God may be organized into Seven Accusations or Articles, which are as follows:
ARTICLE 1
God is a tyrannical Emperor, and His rule is and has always been a reign of terror. Treating us as His slaves, God demands that we live in constant fear of Him.
ARTICLE 2
God is a Warrior who loves war. Conflict, bloodshed and sacrifices are immensely pleasing to Him.
ARTICLE 3
God, who views us as His slaves, sees no problem with our enslaving one another. God allows and has always allowed humanity to own and abuse slaves without making any attempt to free them. Furthermore, the decrees made by God and His Son have done nothing to eliminate slavery, but have rather only helped to perpetuate it.
ARTICLE 4
God is racist. Whomever among the peoples of the earth are God's chosen people thereby have every right to destroy or enslave those who are not. On those occasions when God's chosen people come into conflict with one another, then those to whom victory is granted are thereby proven to truly be God's chosen people.
ARTICLE 5
God is male. Being only male, God thus favours the male gender as a superior representation of His image, and considers masculinity to be superior to femininity. This is further revealed by the many misogynist laws throughout history and by His only choosing males to perform His will, especially at the highest positions of authority.
ARTICLE 6
God hates homosexuals. To God, homosexuality is sinful in any and all cases, as His Sacred Scriptures reveal without exception. God considers hatred of homosexuals to be justified. No matter how God chose to cause homosexuals to exist, they are among the “chaff” of which He spoke, and He “will burn up the chaff with unquenchable fire.” 2 ARTICLE 7
God hates transsexuals. Let us instead call ourselves “transgender” or simply “transpeople” if we wish, it matters not; God gives only one gender, and He reveals this gender to us only by the flesh between our thighs. Even to dress in a manner which does not conform to this flesh is dissolute and could never be pleasing to God. Far from any similarity to the image of the androgynous angel, we are instead nothing more than deluded abominations in the eyes of the LORD our God.
The Seven Accusations are all based either on misinformation, incomplete information, or combinations of both…. Fortunately, society has generally reached a level of enlightenment at which certain things once thought impossible to discard – such as slavery – are realized to be unnecessary; as God always knew they were. As a result, the first four Accusations are more easily dealt with.
However, if these Accusations seem at all easy to deal with, it is only when they are compared to the final three. Women and the LGBT (Lesbian, Gay, Bisexual and/or Transgender) community have long been mysterious to a civilization which has generally been governed by heterosexual males, and thus we have been severely misunderstood.
In their zeal to please God, there are those who are tempted to condemn because they lack wisdom. In their belief that we are condemned, there are those who are tempted to abandon God because they lack hope. Yet God has made a way for all of us to escape, for deep within His Sacred Scripture He has enabled us to know the truth, and the truth shall make us free.

Due to the supposedly losing war that Christianity has fought against the decline of its values for the last one hundred years, Christians seem to have entered a sort of “siege mode”; they are afraid that acceptance of “liberal ideas” about women, homosexuals, and the transgender community are a part of the increasing moral decadence of our society. As a result, they have defensively shut their gates against such perceptions, leaving many of us out in the cold.

Is this God’s will?

No. Why God Doesn’t Hate You is the result of transgender Roman Catholic consecrated maiden Tia Michelle Pesando’s extensive theological research, and it brings to light several startling truths. No longer should we feel the need to choose between science and faith, or between religion and our own understanding of what is right and wrong.

The knowledge contained herein both reassures and provides an excellent defense for those minorities previously persecuted by Christians, as Tia Michelle knows from her own experience coming out after thirty years in the guise of a man. Recently, she walked into a Roman Catholic church just before mass dressed as a woman, wearing the veil of the consecrated maiden, and approached the priest with the statement, “I have assembled a rock-solid argument in favour of homosexuality.” The positive response she received alone shows that there is hope.

When she was sixteen years old, Tia Michelle endured a near-death experience which changed her life. Several years and much study later, she has become the world’s first hermaphrodite Roman Catholic consecrated maiden and is in the process of joining the Carmelite Order of sisters.