AN AWAKENING TO DIVINE LOVE 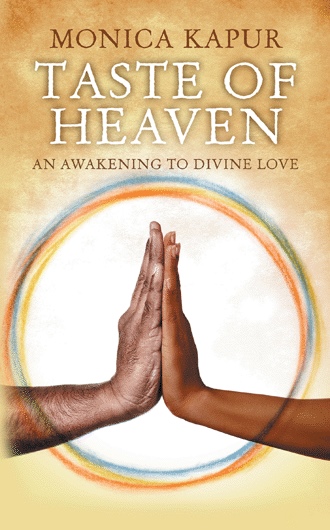 I am about to speak the truth, the absolute truth. As I write this, I am cold and I am nervous, but all that I write is the truth, the truth of my life and mere existence. Truth is God.
On Wednesday, March 5, 2008, my life changed forever as I had my very first glimpse of God. On this day of Shivratri (the day of special worship of Lord Shiva), it was snowing all morning, so my husband, Amit decided to work from home. It didn’t make sense to me until later that day as to why it snowed and why Amit had to be at home that day. As always when this happens, I was very happy and smiling ear to ear because Amit was at home. I love snow days.
Amit was in his office all morning, and then finally he walked downstairs and into the kitchen. He grabbed a Diet Coke from our fridge and when he turned around to look at me, something extraordinary happened: I saw a glimpse of Lord Shiva in Amit. It was as though I were seeing him for the very first time in my life. The glimpse was timeless and eternal, although in our sense of time, it was likely just a few seconds. Complete stillness and calmness surrounded me, and I had forgotten where I was or what I was doing. I didn’t have anywhere to go or anything to do after that encounter. I felt like I could just live in that bliss for days, months, and years, and that’s exactly what I’ve been doing.
In her book Life on the Other Side, Sylvia Browne writes under the section titled “The Face of God”: “The manifestation of God, our Father, the intellectual dimension of the Godhead, is more like a brief, brilliant arc of electricity—He can only maintain the Form of a magnificent Face for a few short heartbeats, and even then the details of the Image are too highly charged to be distinct and describable.”
There wasn’t a snake around Amit’s neck, and neither did he appear to have long hair, as shown in moortis and pictures of Lord Shiva. However, it was still Lord Shiva. It was still God, although I may not be able to fully describe Him in words. I saw God in the love of my life. I saw God in Amit.
Those eyes that first captivated me when we met many years ago were sparkling with truth and love, which are both God’s identities. As I admired the beauty of Amit’s face, especially his almond-shaped eyes, he blushed smilingly and asked what I was looking at. I wish I could have told him then and there what I saw and felt, but I knew that it would be hard for him to understand and accept. There was now no turning back to the life that I lived before, after what I had witnessed. I was given a new set of eyes to view the world. These eyes are to see God in everyone and in everything.
The purpose of every religion is to see, communicate with, perceive, or experience the presence of God. I thought to myself, “What did I ever do to be so blessed in this lifetime?” After having had this glimpse, however, I couldn’t imagine my life in any other way. I felt like this was the very beginning of my life, my true spiritual life.
Later that evening, we went to a temple to celebrate Shivratri. When Lord Shiva is your husband and lives with you, then do you really need to go to a temple? God doesn’t live only in the moortis of a temple. God is omnipresent, omnipotent, and omniscient. I bought flowers to take to the temple, but I also bought my Shiva (i.e., Amit) a red rose. Buying flowers to take to the temple is a ritual, something that I was taught to do when I was younger. God doesn’t need flowers, as everything already belongs to Him. God needs our love, which we can show Him by loving His children and all of His creation. Buying flowers for Amit was how I showed him my love that I couldn’t express in words to him earlier that day. I had never felt the type of closeness to God in any temple that I felt on this morning of Shivratri with Amit. The flower that I bought for Amit was from my heart and was full of love. It was full of God—the source of all love.
When we came back from the temple, our firstborn daughter, Jaya, was sleeping upstairs while Amit, Ariya, and I were in the family room. Ariya was in her baby swing, and we were on the couch. As I walked from one side of the room to the other, Ariya’s eyes and head followed me. I couldn’t believe it. She was just over a month old. I asked Amit to try and see if she would follow him and at that moment, Ariya looked directly at me and gave me the firmest wink. It wasn’t because something was in her eye. I wasn’t imagining things, as my loved ones later suggested. It was real. It was from God. I was at a loss for words. I just stared at her. That was the first of many winks Ariya gave me in the first year of her life. God was communicating to me through Ariya, and I understood Him.

Monica Kapur has been a lifelong seeker for the deeper meaning of life beyond the material forms and the world that is visible to us. She was inspired to write Taste of Heaven after experiencing a profound awakening to divine love in 2008. Her background includes a business degree with a major in accounting from York University and a bachelor of education from the University of Toronto. Monica resides in southwestern Connecticut with her husband, Amit, and their three young children. She is currently working on her next book, titled Mysteries, Magic, and Miracles.