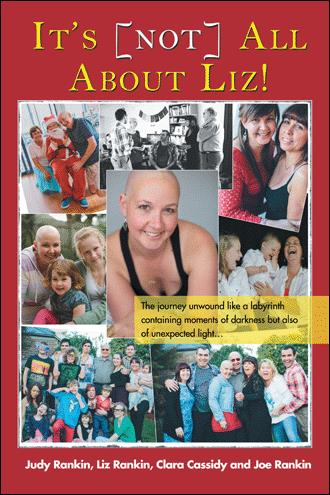 It is said that cancer reaches far beyond the body it attacks. Liz, the youngest of four siblings, spent the majority of her early years in Victoria and Tasmania. In her thirties, she followed her heart to the coast of New South Wales. By age thirty-nine, she was a wife and mother on the verge of a new life as a theology student. And then she heard the two words no woman ever wants to hear: breast cancer.

It’s [Not] All About Liz! tells the true story of her battle with cancer through her eyes—and through those of her family. Liz; her older sister, Judy; her eldest daughter, Clara; and Joe, the family patriarch, each share a unique perspective on how Liz’s cancer impacted them.

The experience took her family and friends on a roller-coaster ride of emotion, one that contained moments of heartbreaking darkness— but also unexpected light.

Liz Rankin was diagnosed with breast cancer at age thirty-nine. She currently works with Community Life Batemans Bay Inc., working with the people in her community that she cares for deeply. Liz’s older sister, Judy Rankin, is a mother of four and an empty-nester. In addition to her career in fi nance, her true passions lie in being creative and expressing herself through music and literature. She lives in the Dandenong Ranges of Melbourne, Victoria. Liz’s eldest daughter, Clara Cassidy, loved her new outdoor lifestyle on the coast. An only child for the fi rst ten years of her life, she was just twelve when her mother’s life changed. Patriarch Joe Rankin, a father to four children, grandfather to thirteen, and great-grandfather to three, and a former minister of religion, is retired and loving it.