The Great Joy of Healing Past Lives

Making This a Fabulous Lifetime with EFT Tapping 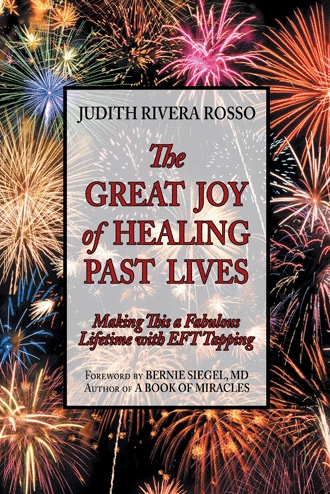 HOW CAN YOU KNOW IF YOU HAVE LIVED BEFORE? According to a Gallup Poll that was done in 2001, twenty-five percent of American adults believe they have lived before and according to a Harris Poll done in 2003, twenty-seven percent of people in the United Kingdom share that belief.
There are various estimates about how many people believe in past lives but it is generally estimated that almost two billion people on Earth believe that they have lived before. Even though that represents about twenty-five percent of the world’s population, I did not write The Great Joy of Healing Past Lives to try to convince you that you have lived before or that you will live again in another body when you have finished with this one that you now have. As many as twenty-five per cent of people on Earth believe that our souls are energy bodies that live forever, picking up and letting go of different physical bodies along the way. I cannot say with total proof and scientific certainty that we have had other lifetimes, but polls do indicate that in recent years, more and more people have been embracing the existence of past lives. What I do know, with total certainty, is this: when my EFT clients, students and I use EFT tapping to free ourselves from past life problems, the fears, the pains, the illnesses, the limitations of this lifetime usually improve or completely disappear. Is it our imagination? I don’t think so and I honestly don’t care if it is! I am only interested in helping people live better lives in this lifetime. “But”, you might be thinking, “is it true that I have lived before?” There are, frankly, many answers to that question and because I encourage you to embrace any skepticism that you might have about past lives, here are some possible explanations:
• Maybe it is true that we are eternal and will live forever picking up different physical bodies along the way and often making the same mistakes over and over again.
• Maybe when people feel that they contact their past lives for therapeutic reasons and they actually do heal problems of their current lives, perhaps something else is taking place that has nothing to do with so-called past lives, also known as “reincarnation”. • Maybe, if reincarnation is a reality, we are like mirrors of ourselves becoming better, wiser, more intelligent or more creative with each life experience or making the same or similar mistakes lifetime after lifetime until we learn from them.
• Maybe by using EFT or being in a hypnotic state people only think that they have contacted past lives. The reason could be that with these two techniques, EFT or hypnosis, the human mind creates metaphorical and symbolic representations that release negative impulses that actually can heal current problems.
• Maybe, for healing and recovery to take place, the mind needs to imagine fictional past lives that are distant and different in all ways from our present lifetime.
• Maybe the human mind needs to readjust itself and imagine the causes of a current problem to have originated in another lifetime simply because it would be too painful to blame the cause of a current problem on negative circumstances of this lifetime.
• Maybe the answer is that we humans, through EFT or hypnosis, need to by-pass our conscious minds and allow our subconscious to heal us but only when we create past life identities.

The act of contacting our distant past and becoming liberated from misconceptions and limiting beliefs about ourselves can free us from both physical and psychological distortions. The problem is that we humans often tend to carry around a lot of limiting beliefs inside of us, believing that those misconceptions are the truths about ourselves and our world. Whatever the truth is, the fact that people have been known to revisit what they believe are their past lives and actually feel better and even, by doing so, heal present life problems, is a tribute to the magnificent powers and abilities of the human mind. It is the healing that we, even those who are the most skeptical among us, ought to be celebrating.
Are past lives real or imagined? I vote for past lives!
Of course we are eternal. We have lived before and we will live again; it is only logical. CHIEN-HAO LIN

“...insights, wisdom, and methodologies for healing past life experiences in a beautiful and remarkable way.” —Lindsay Kenny, EFT Master-Trainer
“There is gold between the covers of The Great Joy of Healing Past Lives and it gets an absolute and unequivocal ‘yes’ from me—read it!” —Bennie Naudé, Master Trainer, EFT and Matrix Reimprinting
Is Death the End of Us?
Many modern teachers, physicians, psychiatrists, psychologists and scientists are joining some of history’s greatest thinkers to affirm that we are timeless. Our lives do continue.
Learn how to revisit past lives to free yourself and others of trauma from the distant past for greater health and happiness, now and in the future.

Judith Rivera Rosso is an expert practitioner and teacher of Emotional Freedom Techniques (EFT). She is the author of EFT & Vita, published in Italian, and the English e-book, EFT & Life. Her skills have been tested and certified by the authority on EFT: creator, Gary Craig. She lives with her husband, Adriano, on their organic farm and Bed & Breakfast on a mountaintop in Northern Italy.