The Book of Ah Ha 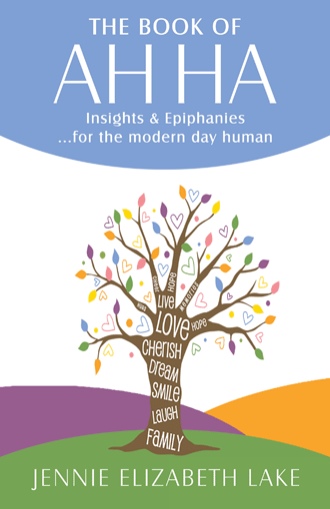 88 Words
That Changed Everything

No one told me I didn't have to believe my thoughts.

Matter of fact, no one told me that thoughts don't come with disclosure statements!

"Disclosure Statements"? You know, like the ones on the radio when an automobile ad comes on, and at the end some fast talking person recites all of the legal jumbo. If "thoughts" don't have disclosure statements then how do you know if they are based on reality, or something we made up?

How would we know without questioning them?

What you just read are the eighty eight words that have helped change the lives of thousands of people. This, when understood, can change your life – as well as entire neighborhoods – and it has!

The day the insight "I don't have to believe my thoughts" hit me, I cried. It was a cry that felt like it had been building up inside of me for many years.

This, the cry of all cries, left me weak and on the floor as the mental pain I had held on to for so long released its grip. I had the realization that for the first time in forty four years there was something I could do when I find myself in situations that, before, would take me down a very dark path.

I began to see that I could actually have avoided the times in my life where I had hurt myself and others; that is, if I would have had the "awareness" that I could have questioned where my "thoughts" were taking me. It quickly became obvious that the new path I was on was beginning to provide some of the relief I had spent a lifetime searching for. Many of you may also be looking for answers on how to avoid all of the pain and suffering you have experienced in your life; maybe, instead, to somehow replace the pain with more fulfillment and satisfaction in your lives.

What an effort we have all made.

I don't know about your list of attempts, but I've tried just about everything. I tried the big house and the tiny waistline; I tried the big bank account, cars, and exotic vacation spots. I have bought the biggest TV's, had plastic surgery, food, drugs, alcohol, sex, boats, relationships, marriage, children, medication, violence towards others – even attempted suicide to feel better.

Like many of you, I have been in and out of rehab clinics, jails, mental hospitals, and was homeless – living in a car for almost two years. I have been beaten and raped, have hurt others, and consistently failed to meet my responsibilities and obligations; yet at one point I was a very successful business owner.

My life, like many of yours, had become a carnival ride, endlessly going up and down. My belief was that it would keep going until I finally took myself out of it. Over thirty six years of my life was spent in therapy, and this started when I was only eight years old. Nothing worked – until now.

This was a very different way to see things!

All of a sudden "I am my thoughts" – became – "I am aware of my thoughts." This shift in perspective gave me options I never knew I had.

I was no longer the thought; I was simply having one.

Before, thought was like an identity, something I had to protect. Now it's just a shirt I wear – or not – and "or not" was also new. You see, when I realized that thoughts could be looked at and then decided on – that they are not solid, but are instead, a variable that could be chosen or not – one new option became available. It was the option to do nothing. The compulsion and internal pressure of having to always do something was gone. I no longer had to act, whereas previously I felt I had to, even if it hurt me, or someone else. This new insight allowed me to stop acting "impulsively," blindly making decisions out of desperation.

What a shift in perspective this made!

Why did it feel that by being willing to let go – to do nothing – that this decision actually allowed me to gain more than what I feared I might lose; and that when I gave up the control – already built into the thought I was believing – what I gained was control over my life. By the sheer act of letting go I could begin to see what had been missing for so long. For the first time in my life I became aware that a shift in conscious awareness had occurred. It was as if I had become aware that I am aware, and because of this, a whole new world opened up.

So, what is important to understand here is that we are not talking about the content of our mind – but instead, of being aware of how the content is used. This is an important aspect of the mind to understand, and, like many people, you may never have thought about it in these terms. At times we might pay attention to what is "in" the mind – but do we really understand what the mind does with it, or how it processes it into what we perceive as reality?

No wonder why we kept finding our self in mental accidents. All this time our mind was operating like a car without an experienced driver. At times you could even say it's like a "childish mind, in need of a parent," once we notice how often we follow our thoughts to create an adult version of a temper tantrum whenever we don't get our way.

Please hear me: You are not broken, you were born whole and complete!

Ever wonder how the mind can actually believe that Santa Claus, the Tooth Fairy, and the Easter Bunny are real? Ever suffer over an idea you realized later on wasn’t true? Join Jennie on a fast-paced journey to the end of the mind as she shows the difference between what we make up and what can help us wake up.

Come chase squirrels, visit with Santa, and find that place within where suffering is optional. You no longer need to feel angry or empty inside; Jennie knows the way back home to the real you!

JENNIE ELIZABETH LAKE offers a practical approach, bridging the gap between modern science and ancient wisdom. She has overcome her own tumultuous story to help save and bring healing to thousands who once suffered as she did. As author, educator, and friend, Jennie is able to successfully demonstrate the often-subtle yet meaningful difference between our mind-made constructions and actual reality.
Jennie grew up in a small farm community in Ohio. From there, her journey unfolded through the course of receiving direct instruction from world-renowned teachers who set the foundation for the work she does now. She honors them by continuing to extend the tradition of these teachings.
Jennie is the founder of several organizations dedicated to alleviating suffering by way of self-inquiry. Over the years, she has received countless accolades, and her presence has been in demand as guest instructor at several universities.
In addition to training some of the most renowned mental health professionals and spiritual teachers in the world, she assists youth programs, community centers, as well as several hundred probation departments across the country. It is these experts whom she instructs on how to best implement her groundbreaking work. By utilizing her services, the cycle of violence has been greatly reduced throughout many communities.
From her home in Arcata, California, Jennie teaches and travels, responding to requests to conduct workshops and seminars across the country.