Dancing for the Fat Lady

Dancing for Life, Peace, and Sanity: The Ojibwa Sundance and Other Ceremonies 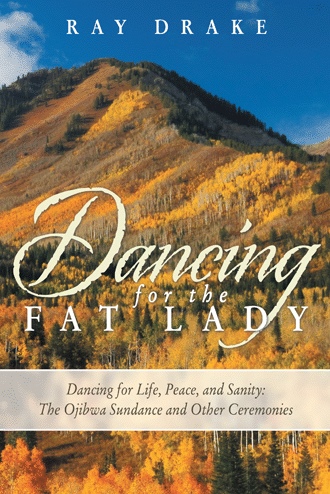 It looked as if it was really going to happen. I was actually going to enter into the sacred Sundance arbor. Wow - whoda thunk it? As I look back at this now, I do so with a lightness of heart and a sense of humor about it that I surely did not have at the time. As the time for the grand entry into that arbor neared, I was not so sure about this Sundancing business, but at the same time, I was eager with anticipation, and willing to give it my best shot. Months earlier, when I had come to the realization that I was called to Sundance, and therefore I could not escape my “fate,” I resigned myself to whatever that entailed. Now, I was here in the flesh and not just in my imagination.

This is the story of my journey from a university psychology department to public mental health and private practice, and on to being a psychologist in “Indian land.” It includes, of course, the many interesting people, novel experiences, and challenging ideas I encountered along the way.

It is a story of expanding spiritual awareness and growth as a human being and the part played in that by the Chippewa/Ojibwa Indians, whose own practice of faith clearly embodies Jesus’ teachings on how to live with reverence, gratitude, humility, and grace. The discovery of their faith was an immense surprise and an unexpected joy.

Eventually I was called in dreams to Sundance in Canada, a calling that also included dancing in other ceremonies which, like the Sundance, required four days of fasting and prayer. I attempt to convey to the reader some of the learning and growth that are inevitable when one dances in a sacred arbor filled with kind souls and the Creator’s unconditional love—and yet I know full well that words merely hint at what can be learned only through experience.

When I answered the call to Sundance, who could have known that as a dancer, helper, and eventual leader I would spend the next eighteen years of my life in those sacred arbors? I was fifty-two when I first danced and a couple of weeks shy of seventy when last I dragged the buffalo skulls.

My dear wife pursued her own calling to teach children, and wound up teaching many years in a nearby Indian school. She made this journey ours by her loving constancy, faith, courage, and support. She was the first and best of the joy-filled surprises the Creator had for me when He moved me out of the university world.

Ray Drake is a retired psychologist who practiced in “Indian Land” for many years. He also participated in Ojibwa Sundances during that time, and he has written about his experiences. He and his wife live in a small town. They love their Packers, going out for lunch, and delivering Meals on Wheels.