Memoirs of a media nomad 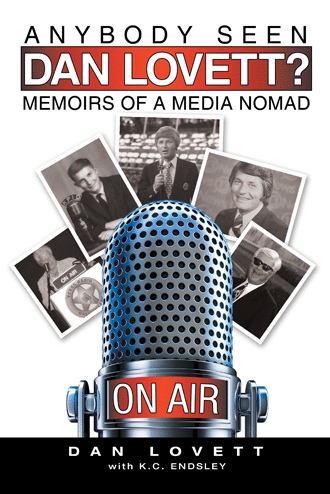 …The D.J. with little to say but lots to play on the big K…

It was June of 1959 and I was leaving the potato patch in the Gem state for big doings in the Show Me state.

Payette, Idaho, a small town, on the banks of the Snake River, with only a single traffic light and a 250-watt radio station licensed to broadcast during daylight hours only. KPID was where I pressed my nose up against the big glass window to see the guy inside talking into a microphone and playing some 45 rpm records and I wanted to do the same thing. Right then and there, I made up my mind I wasn’t going to work at Farber’s department store as a sales clerk, when I graduated from high school. I wanted to be “Dan the Platter Man, the D.J. with little to say, but lots to play on the Big “K’, coming your way, live, the flip side of five.” My initial interest in radio came during my junior year at Payette High when I begged the station to allow me to do a weekly five-minute show on high school news.

SURVEYING THE WORLD AT NOON

“Dan Lovett Survey’s the World at Noon for Safeway,” was my entry into the world of television. I would sit behind an old wooden desk, reading copy I had ripped off the AP wire machine, only fifteen minutes before going on the air. It was also the black-and-white era, no colorcast yet in Central Missouri and there was but only one camera in the studio. There was none of the chroma-key effects that bring showbiz glitz to the local news screens today and I had never heard the word teleprompter. It was just me, sitting at the old wooden desk, my hair in a crew cut, still dark brown and standing stiff with butch wax. I really had no clue as to what I was saying, only that I was looking into a camera and reading the words written by someone else at the Associated Press, but I am on television and everyone watching must think it’s a big deal.

The moment arrives for the commercial break in my 15-minute news program and the control room fades the lone studio camera to black. It was my cue to get up from the desk and walk to another area of the studio, with the lumbering camera following me. There, standing before a shelf filled with Safeway applesauce and canned corn, I make my on air pitch for the sponsor.

“Today at Safeway, two number-ten tins of Dole apple sauce for only 25 cents,” I blurt into the camera.

My commercial pitch complete, we fade to black again as the camera

studio to finish off the mid day newscast.

THE BEATLES HAVE LANDED

…The landing was excellent but the reception was wild…

The “Beatles” were coming to town for their lone concert in Texas on their 1965 U.S. tour, landing from Atlanta, where they had performed several hours earlier.

I was working at KILT radio and had been assigned by the station’s news director to ‘get my butt out to Hobby and report on the big event’, since our station was sponsoring the two Beatles concerts at the Sam Houston Coliseum. I was not impressed. Elvis was my man, who along with Jerry Lee Lewis and Roy Orbison received more play than these four kids from across the pond in the UK.

The whole thing had been setup when I opened my mouth on my daily KTRH radio show in Houston, saying wrestling was nothing but a “fake, a set up.” Local promoter Paul Boesch, who won a Purple Heart and Silver Star with cluster in World War II, took issue with my remark, calling the next day to offer me a spot on one of his Friday night programs at the Sam Houston Coliseum.

“Would I like to challenge a midget to a five-minute match?” Paul asked.

Lord Clayton Littlebrook was his name and the little guy knew his game.

The only time I had ever been to the place they called the “Big Apple” was 1973, when the Houston Oilers played the NY Giants at Yankee Stadium, the venue they had called home since leaving the old Polo Grounds in 1955.

If they could only see me in Idaho now as I was, getting ready to

broadcast a pro football game from the famous ‘House that Ruth built.” Never had I seen so many weirdo’s in one place. They were everywhere, on the street, below the street and pissing in the street. So this was New York City. No one seemed to pay attention to anyone. You could drop your drawers at 5th and 57th and no one would give you a second look. They might know who you were, but they didn’t care. What a great place to live. Little did I know I would soon become a resident of NYC, after taking a call in early summer of 1974.

The former Heavyweight Champion of the World, who seemed dazed and unhinged after his loss to Ali, was going to fight five contenders in one day!

It was April 26, 1975 and Big George would try to regain some lost prestige in his career, and show the world he still had stamina, by lacing up the leather against five pretenders in Toronto, all in one day. There wouldn’t even be any judges at ringside for the five bouts. Roone Arledge, who gave identity to ABC, via his Wide World of Sports programming, had his paws on this sleazy event made for television and I would get my first kick in the butt from Roone, for my comments on the shameful event.

It was Kershaw calling from Baltimore. I couldn’t believe what I was hearing as he tried to tell me how Jessica had died in some kind of an accident, in some canal, near some restaurant outside of Philadelphia.

“Get up now flake and meet me at the Cross Keys Inn.”

Ron Kershaw would not only become Jessica Savitch’s lover, but the one who would teach her how to gain fame in the brutal business of television news. No one better embodied broadcast journalism than Ron. He had a way of striking a balance between the best parts of show business and the ethics of journalism. Kershaw would be the one to teach Jessica how television news was more than just a radio story with some pictures. In the 1996 movie, “Up Close and Personal,” Robert Redford portrayed Kershaw and Michelle Pfeiffer, Jessica, in the story about an ambitious woman looking to build a journalism career in TV, taking the advice of her boss and falling in love with him.

…Hello Champ, you seem to be in a truculent mood today…

On June 22, 1981, the 'Coach' wandered in. The legend in his own mind, Howard Cosell. He was in Washington to attend a special function at 1600 Pennsylvania Avenue, but so was I. Not only was Cosell, the polysyllabic TV sports journalist, a signature figure with ABC Television, but like me, did a daily radio show on the ABC Information network, with a lineup of many more stations than I had. As I was typing, yes we actually prepared our scripts on real Royal or Underwood’s in those days, I turned to find Cosell standing there.

“Hey, Coach,” I said, “What brings you to Washington?”

I had learned from Frank Gifford how Howard loved being called the 'Coach', but only by those in the privileged...

“Dan Lovett was an important part of Eyewitness News history.” —Al Primo, founder of the original Eyewitness News at WABC-TV in 1968 in New York “Dan has always had a great passion for sports, and his knowledge comes crystal clear in this book. Plus, anybody with hair that good has to have something going just below it.” —Ron Franklin, former lead college football broadcaster on ESPN “A man’s man in the true sense of the word. He has the unmatched ability to put your mind into his story. A legendary storyteller; plus, he is a great friend and gentleman.” —Dan Pastorini, former Houston Oilers quarterback “I tossed him out of my garage in gasoline alley at Indy, but felt bad about it because he was from my hometown. Dan came around and showed me he wanted to learn about racing. He is a great broadcaster and cares about my sport.” —A. J. Foyt, first four-time winner of the Indianapolis 500 “I knew when I first hired him he would be a great broadcaster on the radio. He could talk about the farm report and make it the most important story of the day.” —Curt Brown, member of the Missouri Broadcasters Hall of Fame “Dan knows how to tell the story in this book. If you like sports, you’ll Lovett.” —Sam Huff, hall of fame linebacker of the Giants and Redskins

Dan Lovettwas born in South Dakota and raised in Idaho, where in 1959 he worked in radio for the first time as a student reporter.

Dan left for Jefferson City, Missouri, in late 1959 for his first full-time, on-air job with KWOS Radio; by 1961, he had made his first daily appearance on television in Jeff City as a news anchor.

Hired by the McLendon Radio Corporation in 1964 for Houston station KILT, Lovett was assigned to cover the war in South Vietnam at the age of twenty-five. By 1968 Dan had joined KTRH radio in Houston as a sports reporter and became the on-air sports anchor for KTRK-TV, the ABC affiliate in Houston.

By 1974, Dan was on his way to New York City as sports anchor for the original Channel 7 Eyewitness News on WABC-TV, as well as hosting a daily network radio sportscast for ABC. Dan was one of the original sports broadcasters on WFAN in New York before returning to ABC in 1988 with KGO-TV in San Francisco.

Lovett was voted into the Texas Radio Hall of Fame in 2003.