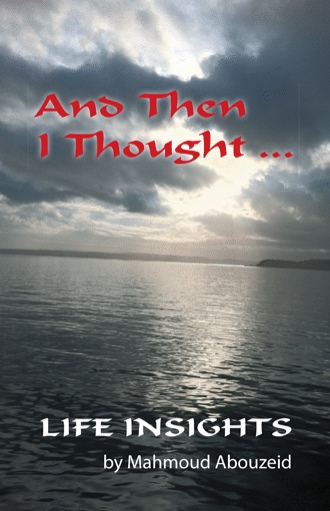 Love is the energy that fuels the Universe. See it as limitless, rather than scarce and exclusive. (Page 66) A sense of wondrous serenity fills the space when things unfold magically. Synchronicity is the rule, and miracles are the order of the day. (Page 88)

And Then I Thought is a collection of epiphanies experienced and recorded by the author in the course of navigating his way through the greatest adventure of all – this trip we call life. A prescription for enjoying a conscious and meaningful existence, the insights will raise awareness and encourage deeper appreciation of the voyage. If you seek genuine love in your life, start by exuding it yourself. It is the most natural, joyful, satisfying, positive thing you can do. It pays untold dividends, and … it doesn’t cost a penny (from page 103) Attitude, not circumstance, determines destiny (from page 120)

Born in Cairo, Egypt, on September 25, 1942, Mahmoud Abouzeid arrived in the United States at age 15. His father, an Egyptian Moslem, and his mother, a native of Montana who was raised a Protestant, offered him a unique perspective on how East and West can meld when the parties are open, committed, and loving.

Beginning in September, 1959, as a freshman at UC, Berkeley, Abouzeid embarked on what has become a life-long journey aimed at discovering the "meaning" of life. He began his career in 1961, first as a newspaper reporter, then columnist, and finally managing editor of the Pacifica Tribune, located just south of San Francisco. A journalism major, he was influenced by the early writers who introduced investigative reporting and “muckraking” to the news business.
Profoundly impacted by the assassination of President John F. Kennedy, Abouzeid decided to forego his newspaper career, promising as it was, for a field more pro-active. He started his own business, working as a support person for law firms in the San Francisco Bay Area. In 1965, he became a licensed private investigator, founding the firm Attorneys’ Investigation Agency. Six years later, while working full time and supporting a family that included his wife and four sons, he entered night law school in San Francisco and was admitted to the California State Bar in 1975.
His law practice for more than 35 years emphasized civil litigation, with particular concentration in the areas of professional negligence, both medical and legal. His family grew with the eventual arrival of two additional sons and then, finally, a daughter. He now lives in Carmel-by-the-Sea, California. His career as a trial lawyer is detailed at www.abouzeid-law.com. His blog can be found at http://www.mahmoudabouzeid.com/