A Journey in Self-Knowledge and Self-Realization 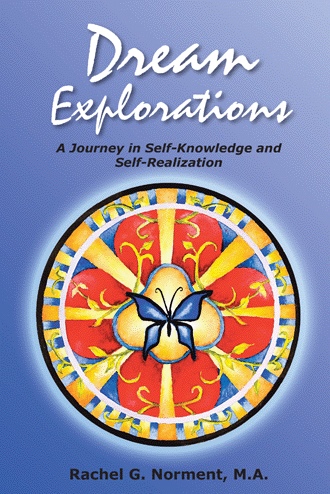 How many of us live on the surface of life—going to work, doing our daily chores, interacting with co-workers, neighbors and family without being aware of what really matters most to us? Are we functioning on the same level we did a decade ago or have we matured and grown emotionally, mentally, psychologically, and spiritually? Is there any way we can learn more about ourselves without going to a psychiatrist or psychologist? The answer to the last question is “yes.” We can learn a lot about ourselves by studying our dreams.
Our dreams come from a deep “inner knowing” within ourselves, the essential Self, the part of us that can connect our physical, mental, and spiritual bodies with the Divine Source, bringing into consciousness information and intuitive knowing that can help us grow and realize our full potential to become the “whole” persons we are meant to be.
Do we really want to know more about ourselves? I thought I did as I began a serious study of dreamwork. In one of my dreams early in 1992

I Decide Against Going Deep into Dark, Foreboding Woods

I am walking and come upon an area that is a meadow surrounded by woods. I think the area is beautiful and I walk some distance into the woods. If I were to go beyond a certain point it would become very dark and foreboding because it is too far from the opening where it is light. So I turn around, feeling it would be too dangerous to go farther, and head towards the opening.

Although I was not aware of this consciously at that time, the dream revealed I was fearful of delving too deeply into the unconscious. In the language of dreams, a collection of trees—the woods—often is a dream symbol representing one’s unconscious. The term symbol refers to a tangible object or concept that stands for or suggests a deeper or more complex reality.
During the next seven years I attended many workshops and seminars led by nationally and internationally known dreamworkers and also read extensively. I wanted to become proficient in understanding dreams and to be able to help others explore their dreams.
Then in 1999 I had two dreams that showed I still had an unconscious fear of going within myself. These dreams spoke directly of going within. They used the metaphor of caves and going deep into the ground to represent going into the unconscious.
The Swiss psychiatrist Carl Jung tells us in Memories, Dreams, Reflections of the important dream he had of discovering a deep cave below the cellar of his house. For him, the cave represented a deep level of the unconscious and “the dream became for [him] a guiding image . . . .”
Exploration of a cave (the unconscious) can lead to greater self-knowledge. The first of these two dreams of mine pointed to going within something as part of my education. Even though I was in my sixties at the time, the dream used the image of going off to boarding school or college.

I am being taken off to a strange boarding school or college by someone, perhaps my father. We enter a small building out in the middle of nowhere, which is to be my dorm. We go into a room that I will share with another girl. I wonder how I will get to classes. I don’t have a car and this dorm is not anywhere near any other buildings. My father walks out, somewhat in a hurry, leaving me to my own devices. I notice that he seems to be fighting back tears—as if he hates to have to leave me in this situation.

I am not sure how we are to have our meals. Perhaps we have a little kitchen. I have hardly had time to eat when an unidentified man appears. He is to take us to our “class.” We are not taken to any classroom building. Instead, we are outside in the wilds and are led through rough terrain. At one point I discover what appears to be the entrance to something deep in the ground. I have the feeling we are expected to go into this on our own. I stand by the entrance wondering what I should do. I’m fearful and reluctant to go in—wondering if I’ll be able to get back out.

The action of my father in the dream was in keeping with what my waking-life father valued, for he always encouraged me to learn and grow intellectually, psychologically, and spiritually. But he died seven years before I had this dream. Thus my father in the dream represented the “wise old man” part of myself that realized the way to self-knowledge is not easy; I may traverse “rough terrain” as I go to the place where I must go deep within. However, “he” knows this is for the best. My ego (the “I” in the dream) was fearful.
The second dream, occurring three months later, expressed my unconscious fear of someone coming out of a cave.

My husband and I are walking outside and are passing an entrance to a cave or a passageway deep into the earth. I glance in, but then we hastily walk on because we're fearful of being seen and followed by someone who is coming out.

Even though I had been exploring dreams for many years by this time, apparently a part of me still was not convinced it was safe to “go within.” Maybe I feared what the man coming out of the cave might represent—an assertive, energetic masculine energy within myself. As I look back on this dream now I realize that this masculine energy could and would help me undertake various new activities in the coming years. But at the time I had no idea how my life was evolving, and we humans often fear the unknown.
In 2001 a dream showed there had definitely been a shift within my psyche. Here is the dream:

I’m in an unidentified location with other people. We’re in a wooded area beside a small body of water. I’m talking with others when I notice something orange in the water quite some distance away. I think I’m seeing an orange fish. Then I realize I’m seeing a reflection of the bright orange dress worn by a woman just coming into view as she emerges from a more densely wooded area by the water.

In this dream I saw a woman who represented a part of myself that had been deep in the woods—my unconscious—and was now coming into view in a dress—a symbol of an intuitive, feminine outlook. The color orange may indicate a blending of emotions and intellect, abundant energy, and a friendly, outgoing manner. I evidently was no longer fearful of going into my unconscious and was acquiring a greater understanding of myself. I had gained desirable attributes. The dream offered metaphors for gaining knowledge, achieving growth, making progress along life’s journey toward wholeness.
A well-known therapist in the fields of psychology and psychoneuroimmunology, Paula Reeves, writes in her book Heart Sense: “Our dreams . . . urge us to discover who we truly are and what we must believe in order to be true to our core self.” At several conferences I have heard her state: “When you don’t know or care what matters most to you, that then becomes the matter with you.” Our dreams are messages from our core self. From them we can learn what matters and what can contribute to a healthy future.

Through Rachel Norment’s Dream Explorations: A Journey in Self-Knowledge and Self-Realization, you can

• learn contemporary methods of dreamwork inspired by Carl Jung and developed by Montague Ullman, Jeremy Taylor, and many others; and
• discover the deep inner wisdom you have within yourself that can guide you towards spiritual growth and physical and psychological health and wholeness—toward becoming the person you are meant to become.

“Rachel Norment’s Dream Explorations … is a gift to us all! The combination of her careful attention to her own dreams over decades and her keen eye for the dreams and insights of other dreamers has produced a work of great depth, wisdom, and inspiration. It is a joy to read.”

—Jeremy Taylor, D.Min., cofounder and past president of the International Association for the Study of Dreams (IASD) and author of The Wisdom of Your Dreams

“In this valuable and highly readable book, longtime dreamworker Rachel Norment offers us her collection of dream treasures with instructive reflections on common symbols and dream themes. This book clearly illustrates the rewards of a lifetime of dreamwork to guide and heal our lives.”

—Chelsea Wakefield, Ph.D., LCSW, psychotherapist and author of Negotiating the Inner Peace Treaty: Becoming the Person You Were Born to Be

“Serious dream workers and seekers after self-knowledge will be delighted by this book. Rachel’s practical insights … into her personal symbols and themes are sure to bring light and guidance to anyone’s inner explorations. I highly recommend it.”

—Jean Benedict Raffa, Ph.D., author of The Bridge to Wholeness, Dream Theatres of the Soul, and Healing the Sacred Divide

Rachel G. Norment, M.A,, is a certified dreamwork facilitator and author of Guided by Dreams: Breast Cancer, Dreams, and Transformation.
Visit her online at www.expressiveavenues.com.