How to Float When You're About to Sink 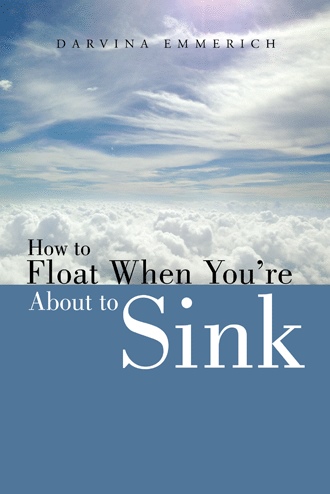 1: The Diagnosis - A Voice in the Storm Our journey began in the winter. I can remember that day as though it were yesterday. It was one of those defining moments in life that never leaves your mind, one you try to make sense of long after it’s over. It all began when Jim developed an aching pain in his right shoulder at night. When he was sleeping, I could hear an unusual sound coming out of his body. It was difficult to explain to him, as there were no words to describe the sound, but I knew it was unlike anything I had ever heard. At one point, I said to him, “I will tape you if that’s what it will take to make you believe me.” The sound was haunting. Every time I thought of it, I got a knot in my stomach. I had great fear of why this was happening. “Jim is healthy,” I told myself. But the other little voice inside me said, “He needs to see a doctor.” This would be just the beginning of many messages. Jim never complained much, but since this had been going on for about a month, I grew more concerned each passing day that the pain didn’t go away. The other unexplained symptom was weight gain in his neck. He noticed that he could no longer wear his shirt buttoned at the collar or wear a tie and thought he was gaining weight. That didn’t make much sense to me because he didn’t look as though he had gained any weight in any other area of his body. This was just another confusing part of this puzzle. I was not convinced. In our family, I was the emotional one while my husband was the calm one. Therefore, we made a great team. Jim could usually convince me to stay calm, but he also knew that when I nagged about something long enough, he should listen. This was one of those times. I knew something wasn’t right. Call me sensitive, intuitive, or whatever you like, I thought. But when I have a feeling that something is wrong with someone in my family, I can’t rest until I’m convinced otherwise. After considerable nagging, Jim made an appointment with his doctor for a Wednesday. The doctor ordered a chest x-ray that same day that revealed a mass the size of a grapefruit in the middle of his chest. The doctor immediately referred Jim to a cardiologist for an appointment the following day. The cardiologist immediately ordered a CAT scan, which was performed that day, and indicated that the mass was a tumor. Now the unanswered question was if it was benign or malignant. The cardiologist told Jim to cancel his business trip to Japan that was scheduled for Monday. Instead, a biopsy was scheduled at a local hospital for that day, December 12, 1995. We had a whole weekend to wait. Jim was a product engineer manager at Motorola, Inc. in Austin, Texas, and had been employed there for the past twenty years. How could this be happening? I thought. Jim was the picture of health. He could have been a poster boy for health! He lived his life the way most people would like to live theirs. By this, I mean he never overindulged in anything and was in control of all facets of his life. He was his own person. No thing or person ever controlled his spirit. It’s actually one of the reasons I fell in love with him. How important this great quality would become in the coming months when his spirit would face the greatest challenge of his life: death. Jim’s greatest attribute was his sense of control. Now he was facing a situation that dictated to him, where he had a total lack of control. He was not yet at a place in his spiritual life where he knew he was never really in control. Even when he thought he was, I could not convince him. It could have freed him of his greatest fear. He—like so many others who never had any direct experience with miracles—would learn that when you surrender control to God’s great healing power, great things happen in your life. I couldn’t remember the last time Jim had missed a day of work. And he was very active. How could there be a grapefruit-sized tumor in his chest without more symptoms? There had to be some mistake. Jim remained optimistic, but I was not. I exclaimed, “Please help us, God!” I remember feeling in my heart that something was very wrong. But in my head, I wanted to believe otherwise, so I told myself, “I’ve got to remain calm and not jump to conclusions.” The weekend seemed to go on forever. Little did I know that this would be the beginning of many endless hours and days of learning the lesson of patience. In all thy ways acknowledge him, and he shall direct thy paths.

December 12, 1995 is the day that changed my life forever. That is the day my husband, Jim, and I received the news that he had terminal cancer. We were totally unprepared for this and unprepared for the months that lay ahead—months of waiting, of hope and hopelessness, of surrender, and of seemingly endless decisions. How to Float When You’re About to Sink takes you on a journey through vignettes from specific days and events. Moreover, it shows how anguish and despair can turn into unruffled faith. It is a heart-wrenching and soul-searching story of life and death, written to offer inspiration for others to surrender their strength to God to resolve the mysteries of life. It’s now 2013; many miracles continue, and writing this book is my miracle! This is knowledge that is necessary and more relevant today, eighteen years later, with the healthcare crisis we are experiencing to help and support the patient, caregiver, family, or anyone who is facing a life – threatening health challenge. I pray our story allows others to find hope and celebrate each day as the precious gift that it is with those they love.

Darvina Emmerich is the founder and president of the Wrapped in Love Foundation, a nonprofit organization inspired by the memory of her husband, James Emmerich. She lives in Pittsburgh, Pennsylvania, and is the mother of two beautiful daughters, Tara and Robin, and the grandmother of two precious little angels, Ava Grace and Addison Hope. Her life is dedicated to spreading love and hope to others.www.wrappedinlovefoundation.org