A Story of Hope and Encouragement when Living with Adversity 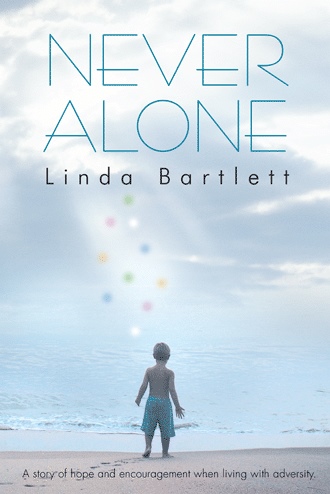 Never Alone is a captivating story about the author and her son’s heart-breaking yet inspiring journey that takes you from the deepest despair of the near-death of a tiny premature infant’s powerful determination to live against all medical odds, his ongoing struggles of physical and mental challenges, the dark times of gut-wrenching bullying resulting in his temporary escapes from “ life” when he simply could no longer endure the horrific cruelty, to miraculous inner strength and great courage in overcoming what appeared to be insurmountable adversity.

It portrays the powerful connection of a mother whose strength is never-ending and her special son as they travel the rollercoaster of life on the sometimes tumultuous path through intense sadness, fear, and heartache desperately seeking answers, never giving up, and ultimately leading to angelic spiritual enlightenment.

The resilience of never giving up portrays the inner strength that we all have as this young boy grows up to discover his own journey and unique purpose knowing that he is never alone; his angels are always with him.

An interview with the author’s son provides insight into the challenging life of a young boy who was judged and ridiculed for being “different”. He yearned to look “normal” so that he wouldn’t have to endure the hurtful comments and stares that he continuously experienced.

He wanted to personally share some of his journey. His desire is that this book will help ease the way for other people who have physical and/or mental challenges, especially when those challenges have resulted in bullying. Such hurtful acts are oftentimes devastating, at times even ending in death either by the perpetrators or the victims.

He shared that there were times when he felt it would have been much easier if he had just left this earth and gone on to a loving place where there was no hurt or heartache, where unconditional love was abundant. Actually, a few times he came close to ending his life, filled with devastating thoughts that he was a mistake, that he just couldn’t endure any more pain and suffering. But there was a tiny seed buried deep inside that assured him that God doesn’t make mistakes and that he had a purpose to fulfill. He also feels very strongly that his angels have protected him through the darkest times with their gentle unconditional love, and that they have given him the strength and guidance to continue his journey.

His hope is that his story will give others the courage to know that even in the darkest moments of despair, there is bright sunshine after every thunderstorm if you just don’t give up.

Hope is eternal and faith is an internal foundation on which we stand. We are never alone.

Never Alone is a riveting story about author Linda Bartlett and her son’s heartbreaking yet inspiring journey; it reveals the seemingly overwhelming challenges they faced and recognizes a child’s powerful determination to live against all medical odds, through gut-wrenching bullying, to angelic spiritual enlightenment. This book takes you on a path from the deepest dark valleys to the highest majestic mountaintops. It is about eternal hope and never giving up.

After growing up in a North Central Texas town, Linda Bartlett boarded her first airplane at the age of nineteen and traveled to Germany, where she spent two years. A few years after returning to Texas, she again flew to Europe, where she lived for more than two years in southern Italy while traveling as often as possible to other European countries, developing a love and passion for experiencing different cultures. She also has spent time in Asia and Mexico and has traveled extensively throughout North America.


Three years after returning from Italy, her son, Jeffrey, was born; three years later her family expanded with the addition of her daughter, Stephanie.


A rocky transition followed, as Linda became a single mom coping with everyday fears of providing for her two children. These fears ultimately became a gift, as her love and passion for helping people led her to a very successful real estate career in both sales and management, while incorporating a positive attitude interspersed with fun and laughter. In fact, her motto was “Turning Dreams into Reality,” which is the way she continues to live her life.