Emma and the Dinosaur 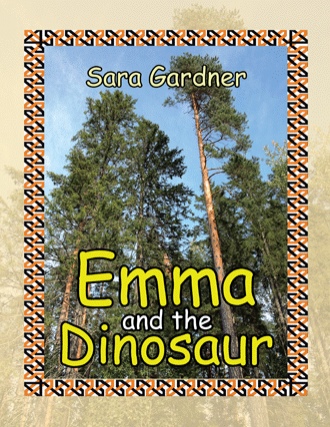 Not really knowing the normal social etiquette for these occasions Emma enquired of the dinosaur “Can I help you?” She hoped that the answer wouldn’t involve any reference to hunger or finding something to eat…. The dinosaur replied “But you’ve already helped me by releasing me from my spell” “Wow” said Emma “how did I do that?” “By saying the magic words” said the dinosaur “What magic words?” asked Emma. “Do you mean like abracadabra? Cos I didn’t say anything like that!” Emma always found it prudent to deny everything! “No” said the dinosaur “the magic words are….Oh I know you love me completely and I love you completely too…and when someone utters those magic words and sends love as light at the same time then the spell on me is broken” “Wow” repeated Emma “What were the chances of that happening!” “Not very high” said the dinosaur “Which is why I’ve been stuck here for millions of years but on the bright side at least I got stuck on the surface unlike all of my ancestors who got totally buried and turned into black liquid which you humans keep burning. Doing that just releases the nasty spell into the new world and makes poison and new bad spells there!” “Oh dear” nodded Emma thoughtfully “That would explain a lot” “So now the more I think about it” said the dinosaur “I’m not so sure that being released was such a good thing after all, at least when I was locked up in my spell I didn’t have to feel so alone and isolated. And don’t even get me started on how misunderstood I’m going to be in this current age…I’ve just absorbed all the latest information from the trees and you people don’t really like us T Rexs do you?” Emma didn’t really know if she should try and humour him or try and break it to him gently but clearly he already had a big inkling that he would be as welcome in the 21st century as a great white shark at a pool party! Some people would want to blow him up, others would want to capture him and stick him in an electrified cage and do horrible experiments on him….not much of a career choice either way… “Err…no we don’t…because you’re so scary….all those big pointy teeth you see…and you eat meat” said Emma deciding to be honest but still a little bit nervous about introducing the topic of food into the conversation! “Actually” said the dinosaur “because I live only in your thoughts at the moment I could live on whatever you care to imagine…if you think that would help” Emma immediately pictured the dinosaur in her mind munching away on lingon berries, pine cones and mushrooms which were abundantly scattered around the surrounding forest floor for as far as the eye could see….and further….apparently! “But it still doesn’t solve the problem of me being the only dinosaur left alive in the whole universe…that’s about as isolated as you can get” said the dinosaur tearfully “I can imagine” said Emma although she wasn’t quite sure that she could imagine the vastness of being the ONLY dinosaur left in existence “but you’re not really alone if you look at it another way” “Oh how’s that then?” asked the dinosaur with interest “Well, my mum says that ultimately everything in the universe is just made of energy, so when you break everything down to its base level all things are made of exactly the same stuff but we just put the building blocks together differently for different purposes and that’s why we all act and look a bit different. Even just with humans there are many different looking people…..and one or two very strange looking ones too I might add” whispered Emma looking around her as if these strange looking people might be about to jump out from behind a tree and object to her comment!

An enchanting and inspirational tale from the Northern Forests featuring love, compassion, humour and a dinosaur! Emma is always happy to be out roaming in the forest with her faithful friend Teddy the dog but although she knew the forest to be a magical place she’d never imagined meeting a dinosaur there! Find out how Emma and the Dinosaur discuss the nature of life and consciousness in order for T Rex to find peace in overcoming isolation & misunderstanding. A beautiful tale for adults and children to share and enjoy.

Sara Gardner is the creator of Mairela Retreat in Finland, a peaceful retreat nestled amidst the beautiful Finnish forest on the shores of a tranquil lake.
She has been a holistic healer since her own self healing from cancer in 2000.
Sara lives with her daughter Emma and their animals.