Mama Always Told Me to Be Different 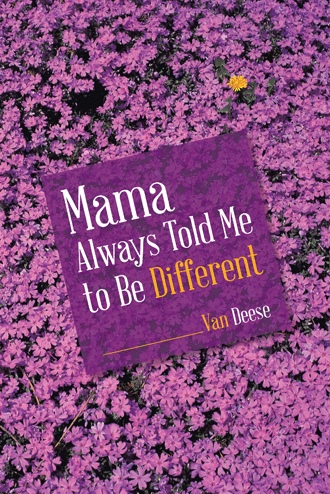 My story starts out back in the early sixties. Charles Deese Jr. and Jo Ann (Cotton) Deese decided to make a trip to Baptist Hospital one day to birth their second child. Upon their return home my sister, six years my senior, was introduced to Charles Van Deese. Now of course, I can’t tell you a whole lot about my welcome home party due to the fact that I was asleep as newborns generally tend to be (at least the ones down here in the South).

The “South”, that don’t tell you a whole lot, nor does it describe exactly where. As I said, I was born in Baptist Hospital but I guess every city in the U.S. has at least one Baptist Hospital. But to be “persactly” accurate, as a buddy of mine used to say, it was Pensacola, Florida which is up in the northwest end of the state. They call it “The Panhandle”. For years I searched my mother’s cabinets for a frying pan with a handle that shape (never found one by the way!). But anyhow, let me continue with the introduction of the people who had such a profound effect on my early childhood and adolescence. My father was also born in Pensacola, Florida to Charles Deese Sr. and Jewel Deese. They were hard working people and raised their only son to be honest at whatever the cost and to be a hard working man of his word. Bust most of all, my grandmother, whom I called “Nana”, raised him to be a Christian.

My father met my mother at Mississippi College, a Baptist college just outside of Jackson, Mississippi. Jo Ann Cotton was born in Jackson, Mississippi to Van and Nell Cotton. (Note the coordination of the names of the two grandfathers to mine). Anyway, Mr. and Mrs. Cotton, otherwise known as “Porter and Fluffy’” had both known hard times coming up but they too taught their two daughters (Jo Ann and Sylvia) that life is not always fair but to trust in the Lord and hard work will keep you happy as well as honest.

Sylvia Suzanne Deese - what more can I say. This is my sister who, by the way, just turned forty. Happy Birthday Sis! Being six years apart we were not real, how can I put it, “close”, shall I say. I was the younger bratty brother. So we never really got along. She more or less tolerated me, which really shows character. I would not have been so nice if I had been in her place dealing with such a “Royal Pain In The Keester”.

I guess my youngest memories are of a precious little colored lady named Dorsey. She helped my mother around the house with the cleaning and the tending to me. I really don’t know how many days a week that she was there. In my mind it seemed that she was always there but knowing the financial strains that two children and life’s necessities can put on a young couple, I think she may have only been there one or two days a week.

I remember lying on our hardwood floors in the mornings watching “Captain Kangaroo” and eating raisins. One morning Mama comes in all excited to tell me that Daddy had gotten me into Pensacola Christian School. I did not know what cursing was at that age but I knew what wanting or needing to curse felt like. That started my hate affair with formal education. Not so much a hate affair but it seemed like such a waste of time to learn things that had no practical use such as diagramming a sentence. To this day I think that English teachers all over the United States got together to see how useless a process they could conceive to absolutely waste time. Henceforth, “Class let’s diagram a sentence”!

My educational experiences saw me start off in Pensacola Christian as a proud kindergartner. I continued in Pensacola Christian until third grade where I had to tell Miss Orthwein goodbye! (Oh yeah, Orthwein, it ain’t exactly a southern name.) Then I proceeded to invade the ranks of Escambia Christian School where life became more southern and serene. You see, Pensacola Christian had a dress code and hair code. In Pensacola Christian the acceptable boy’s hair cut would have made any Marine D.I. proud. In fact, I always thought that some of the teachers at P.C.S. doubled as Marine Corps D.I. fill-ins. Anyway, back to E.C.S. where I expanded my mind in a relaxed environment until Sixth grade. I also learned (around fourth grade) that those weird looking things in class with me and the guys could actually be more interesting to talk to than any of my buddies. In fact, when seven or eight girls started calling your name from the sidelines and cheering for you, you tend to run faster than before.

About this time Mama took a job as Librarian at a beautiful little country school at Barrineau Park School. Three or four weeks before sixth grade started, me and a buddy were playing out back at the house when I had a slight miscalculation in physics which resulted in a misintuned carpicular refraction of the radius and the ulna. So this posed a little - what’s that? Oh! I fell and broke my left wrist (keep in mind I said my left wrist, cause I’m right-handed). But as I had said, I started Barrineau Park School after six weeks of sixth grade. When I transferred to my new sixth grade class I found out that my mother had already told all the girls that I had blonde hair and blue eyes, so their curiosities were already sparked when I walked in that first day. I found that all over the classroom seats had been saved for the new boy. Well I figured I’d play this for all it was worth. By the end of the day l had four or five new girlfriends and all of them were anxious to do my writing for me. Due to the fact that Mrs. Roberts said ” Van can’t write that well with his right hand so we will write for him”. Now some how they understood that I was left -handed when all I said was that I can’t write too well with my right hand! Which really is the truth. My penmanship is terrible but who was I to break their giving spirits? They finally forgave me after they found out the truth but it was worth getting to sit so close to five girls in the sixth grade.

Later years found me at Tate High School, where at the end of ninth grade football season; actually it was the start of spring training for Junior Varsity, I was playing Free Safety. Now keep in mind, in ninth grade I was 5’lO”, wore a size 11 shoe and weighed 104 lbs. I was not your typical All American material. But at spring training, after a year of sitting the bench due to size and inexperience, the new defensive coach, who was built similar to me when he was in school, decided to sit me down and give me a few pointers. I found out how to blind side a receiver or a running back or in this case the Varsity quarterback . Well the ball was snapped and here comes the fullback with the quarterback right behind him. The cornerback took out the fullback which left me to tend to the runner. The Defensive Coach called out “Deese he’d better not get up”, which meant I had to drop all 195 lbs. of this future senior quarterback. Well I’m proud to tell you that dynamite comes in small packages. After the trainers helped him off the field I couldn’t help but think, “that was easy!!”

After practice I went to talk to the quarterback. I suggested that we go get a cold drink. His reply was “I can’t, I don’t have any money. To which I replied, “well, I’ll loan you the money ‘til tomorrow”, to which he said, “ Well, I won’t have it then either”. What he was getting to was that he would have to ask his mother or father for coke money when they gave him gas money each week to which I replied, “Well, don’t you have a job?” As it turned out he nor any of the other “star football players” had money or jobs. When I asked how they took girls out on dates they said the girl either paid or they got it from their parents.

Mama Always Told Me to Be Different is a compilation of short, humorous stories that are from my experiences as a son of Southern Baptist parents, cattle rancher, farmer, carpenter, general contractor but most of all a daddy. Some sound outrageous, but you have my word that they are all true and happened just the way I’ve told them. Thanks for taking the time to read this. I can’t wait to let you into my world.

The author has been a combination of the following: a son of two fine Southern Baptist parents and a brother to a sister that fits the same description. He has raced flat-track motorcycles, has been both a car owner and part-time driver of Sprint cars, and has ridden bulls—some of these less successfully than others. He now walks with a permanent wobble for all his efforts. He’s a Florida state-certified building contractor and a commercial cabinet shop owner and has been a furniture maker as well as a hunting guide. Van is now a public speaker, single father of three, and now lives on a fifty-six-acre organic cattle farm in Walnut Hill, Florida. His schedule is kept busy by being a daddy to Bailee, twenty-six and displaced to Nashville, Tennessee; Eli, fifteen; Tanner, fourteen; Ellie, the Jack Russell princess; and Walter “Damn You” Deese, the wannabe cattle dog. He wouldn’t have it any other way.