Jeremy Q Taylor & The Cyborg In The Cellar 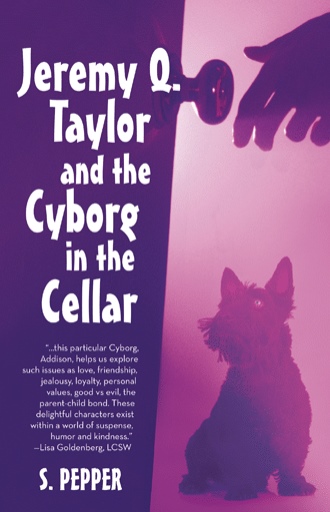 What in the heck is Dad up to? sixteen-year-old Jeremy Taylor thought to himself, as he stuffed his e-tablet into his backpack after the final bell. As he and his classmates made their way to the front doors of the school, he began to feel a sense of excitement. “Freedom!” he exclaimed, as he ran through the doors into the bright sunlight. “Until tomorrow,” he added under his breath as he motioned to his best friend, Al Duffy, to join him. The boys made their way through Gilroy High School’s parking lot to Jeremy’s fiery red Mustang convertible. His dad had bought him the car the year before, after his mother died. Jeremy’s dad, Bob, had wanted to cheer him up a little—Jeremy missed his mom very much. They had been so close. It was late in the afternoon on a beautiful spring day in Silicon Valley, California, but Jeremy was pensive. “You and Alex have to come over after dinner,” Jeremy said to Al while unlocking the car doors. “Dad’s unveiling his big surprise tonight. Remember how I told you how he’s been working on something downstairs in the basement for a really long time? It’s been, like, a whole year, and I just don’t know what to expect! He says it’s a big deal, and that I’ll love it. But what if I don’t?”

What sets humans apart from cyborgs? Sixteen-year-old Jeremy Q. Taylor is about to find out. After losing his mother the year before, Jeremy feels more alone than ever. Then his dad surprises Jeremy with a new “brother.” Addison is a cyborg, who looks to be about eighteen. But he’s not just any cyborg. He’s almost perfect in every way. When the plans to mass-produce the cyborg are sold to a robotics company, things get complicated. Can they reverse engineer the cyborg? What if something goes wrong? The possibility of this occurring creates fear and anger in those who have grown to love Addison. Going into hiding may be his only chance to survive.

Jeremy Q. Taylor & The Cyborg In The Cellar is a fun, suspenseful sci-fi book that takes the reader on an adventure in the not-too-distant future involving a perfect cyborg and a none-too-perfect teen boy. A tale aimed at “tweens” – those youth ages 9-12 – but equally enjoyable for all, the book explores questions of good vs. evil, spirituality, and more. These themes are cleverly woven into a fast-moving plot involving an idealistic scientist struggling as a single parent, typical American teenagers, and a greedy businessman with his own plans for that cyborg. Growing up with two rambunctious siblings in New York, S. Pepper always had a book in her hands, and was often told by teachers that she should write for a living. An MBA led to a fulfilling career in education products marketing, and now Ms. Pepper is finally pursuing her dream of writing books for pre-teens. “I have always had a passion for the future and our spirituality,” says Ms. Pepper. A big fan of The Terminator movie series, she wants pre-teens to ask themselves, “What does it mean to be human? Are we simply our DNA or are we more? How soon might cyborgs be living among us?” She feels that middle schoolers are the perfect audience for her questions, because of their open attitudes and self-discovery at this age. S. Pepper currently lives in Gilroy, CA where the book is based, with her husband and daughter.