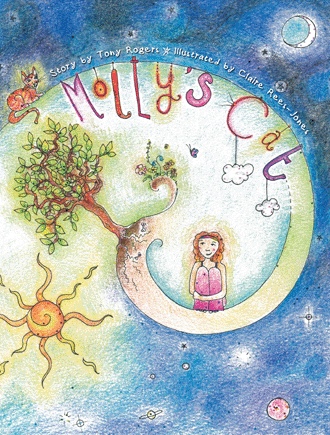 “Mum, dad!” called Molly loudly as she ran into the house when she got home from school.

“I was telling the kids at school about the atoms. You know, like how we are made from atom bits that used be part of other creatures and trees and things...”

“Well, there’s this smart kid called Donny Hooper at school, and he says that it can’t be true because if we are all made from atoms that used to be part of something else then what would the first living things have been made of? There wouldn’t have been anything before them to have left any life atoms, or whatever the special atoms are called that are used to make living things,” said Molly.

“The special ones for making living things are called carbon,” said her dad coming into the room, “well most of them anyway, but what’s all the fuss about?”

“I think Molly wants to know where the carbon atoms came from that were used to make the first living things.”

“Well, that’s easy!" said her dad, “they came from the same place as all the other atoms on Earth.”

“And where was that?” asked Molly.

“Stardust!” he said with twinkle.

“Stardust?” cried Molly, “You’re joking with me now, aren’t you?”

“Not at all,” said her dad, “the World is made from stardust.”

“But where did the stardust come from?”

“Well, billions of years ago some stars exploded, and spread bits of stardust all over the place. As years passed, these bits kept jiggling around and bumping into each other and gradually built up to a big ball that we now call the Earth.”

“Wow!” said Molly, “that must have been pretty spectacular”

“I guess it was,” he said. “But to start with it was not the sort of World that we could live in. It was far too hot and dry, but over the years it cooled down.”

“A few billion?” she cried. “That’s ridiculous! You mean that the World was here for billions of years with nothing living on it?”

“Well nothing can live without water.”

“So where did the water eventually come from?” asked Molly, who, to be honest, was starting to get a bit confused now.

Little creases showed on Molly’s forehead as she thought for a while. “Not atoms of stardust?” she exclaimed, and as she looked at the smiles on her mum’s and dad’s faces she realised that she must be right.

“The world’s made of stardust, everything is made of stardust atoms. Brilliant, this just gets better and better!” And she ran off to her room, shouting back “I’m going to phone Donny now and tell him.

When Molly’s pet cat dies, Molly’s tears turn to wonder and eventually joy, as she finds out about atoms and how the atoms of her cat will be reused and become part of other plants and creatures in the future. In this journey of discovery, she realises that if the atoms continually get reused in the future, then they must have also done so in the past, and she speculates about what famous people or intriguing creatures may have once used the atoms that she now possesses. This leads her to wonder where these atoms came from in the first place, and she skips for joy and she is amazed when she discovers the answer.

Tony Rogers lives, with his wife Julie, in Stroud in the Cotswolds, United Kingdom. He is a physicist by profession and a technical director at a hi-tech company. Over the years, he has become dismayed at the poor level of scientific understanding of the majority of the population. Unfortunately many children are turned off science at an early age due to the unimaginative way that it tends to be taught. He is also concerned that, despite the huge amount of evidence for the scientific explanation of the origins of our planet and of life’s evolution on that planet, there is still a widespread belief in unfounded religious interpretations.

His objective with Molly’s Cat, his first book, is to try and capture the imagination of children at a young age and introduce them to the wonders of the history of the universe, our planet, and life on the planet by building it into a story about an event in a child’s life.