Life Is a Metaphor

The Definitive Book of Self-Help 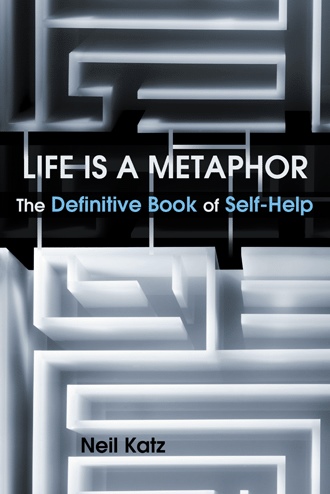 PREVIEW
LIFE IS A METAPHOR: THE DEFINITIVE BOOK OF SELF-HELP

I decided, what with all the subliminal messages from television advertisements (which must all be true and meritorious or they wouldn’t be allowed on public airwaves), that looking good, being fit, and feeling good embody the happiness I had been seeking. I wanted to have a six-pack instead of a one-pack; I wanted to grow strong bones twelve ways; I wanted to be “Yoptimal” and bathed in “Oil of Olay”; I wanted to exude the confidence that my deodorant stick promised to give me; I wanted to watch age lines disappear, reap the benefits of Preparation H, and lope in slow motion through fields of clover, feeling well-protected and fresh as a daisy by my panty-liner.
Purchasing a gym membership seemed like a good place to start. I did a sit-up once so I knew something about physical fitness. But when I saw all those treadmills, elliptical machines, and stationary bicycles, it seemed like an awful lot of work to go nowhere fast. The sounds of ritual grunts and the olfactory assault of stale sweat was not something I would look forward to at each visit. Moreover, I did not relish the thought of humiliating myself by straining to lift five-pound dumbbells while those around me would be flexing and kissing the bulge of their biceps, each the size of a small mountain. Also, paying money to move my body seemed rather foolhardy when I could move it on my own, any way I liked, outside the prison of a fitness club, and for free. My thumbs, in fact, got plenty of exercise with the TV remote, until I developed arthritis in them. So I bought a lanyard from which I dangled my gym membership card around my neck as an affirmation of my athletic prowess (more like an albatross), while secretly willing it to expire.
Having a gym membership was exhausting, so I decided to turn my attention from being fit to looking fit. Although nothing short of radical plastic surgery (and many of them all over the place) would really get me looking the way I thought I should look, I could not stomach the notion of subjecting myself to being sliced and diced and otherwise vivisected by some sadist surgeon who would probably take a world cruise on my pain and suffering. And there were so many body parts in need of repair that I didn’t know where to begin. At random, I supposed I could start at the top and work my way down, starting with my shiny-domed noggin. There wasn’t a whole lot I could do about its flat-backed, forehead-dented, misshapen quality, thanks to an impatient OBGYN and his forceps. I mean you can’t exactly caulk it, or spackle it, or fill it in with wood putty. So I figured I could hide it under a crop of hair which I didn’t possess. Having been bald since before my twenty-sixth birthday – genetics is nothing more than a cruel cosmic -joke – a co-worker presented me with a gift. “Works better than Rogaine,” he exclaimed. I unwrapped the gift to discover a bottle of bull semen. After my initial shock, disgust, and reluctance, I went home and dumped the bottle on my head. To make a long story short, I didn’t grow hair but I did develop an insatiable desire to grunt at red capes. As for other alternatives, hair plugs would be too painful, toupees too sweaty, and comb-overs too pathetic. I decided that if I waited long enough, I could simply grow and style my nose and ear hair to distract from my lack of cranial hair.
As a kid I had these enormous appendages growing out of the sides of my head. Not only big, but perpendicular as well. “We can get the doctor to pin those ears back,” my mother considered. “Or surgically remove some of the excess cartilage,” my aunt offered. I was terrified!
My sister told them to leave me alone, but she had an ulterior motive. Whenever she got mad at me – which was a daily occurrence – she would delight in telling me to “flap your ears and fly away to Africa with the other Dumbo elephants, you big-eared fairy!” Ultimately I was saved by the passage of time, which allowed my head to catch up with my ear size. Except now I had a big giant head to match my oversized ears.
I did have soulful blue eyes, even teeth, and a noble chin with which I was somewhat satisfied. Through karmic intervention somewhere in my thirtieth year of life, however, I contracted a virus which partially and permanently paralyzed the right side of my face. Consequently I developed a lopsided grin, my eye drips tears when I eat, and closes shut when I smile.
As I approached my middle years, I watched my spine curve into a number seven and I saw my belly go to pot. Nervously I chewed my fingers to bloody stumps as I once again cast my gaze into the looking glass. I witnessed my own metamorphosis into old: Wrinkles and skin tags and jowls! Oh, my! Age spots and turkey neck and cataracts! Oy, vey!
Where was this search for happiness and meaning – this Journey Without – taking me?!

Life Is a Metaphor is an experiential, light-hearted look at improving the quality of life by examining thoughts, feelings, and behaviours.

Learn how to look at life in a new and exciting way that can open up new horizons for self-discovery.

Enjoy thinking positively, experience emotions that feel good, and practise behaviours that are productive and proactive.

Neil Katz is the founder and CEO of nothing. His degree in social sciences and linguistics as well as his experience for thirty-three years in a social services career has qualified him for, well, very little, really. He doles out unsolicited advice in the uncomfortable company of others and can swear in several languages. Neil shares accommodation with his first wife in Toronto, Ontario, and lives dangerously close to his children and granddaughter.