The Sacred Order of the Magi 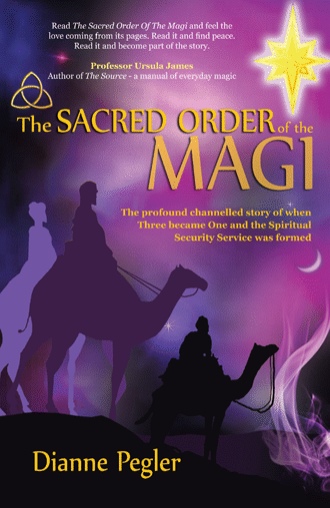 There is a band of Brothers and Sisters who form The Sacred Order Of The Magi.
Close your eyes and in your mind you will see a Light Grid encircling your World
and beyond. These Lights represent members of The Magi those who live
on your Grid still and those who have Ascended.
Of course, once a Member of this most Sacred Order, always a member.

My name is Melchior and I, along with other most learned Beings,
formed The Sacred Order Of The Magi at a time when life was so different
on your Planet Earth. I find the terms Planet and Earth strange to say as we
did not know such words then however I know that is what you call them now.
When we came together all those thousands of years ago, my brothers
and I knew Earth as an Image of The Sacred Mother/Father God.

Another strange concept to me is what you call 'Time'. I mention this so that
you have an understanding of what I want you to know.
We lived in Universal 'Time'.
While we knew that we had an allotted period when we would live on the Earthly Grid,
we saw ourselves as an expansion of The Universal Grid. In that respect,
we felt 'Timeless' and so we all are, of course.

Ascension is not just for your Planet Earth.
Now is the time for all of The Universe to return to The Grid.
Do you now see the urgency to remember and to shine your own Light on The Grid?
I hope so for I cannot stress how important your participation is in the process however
I also hope you feel this within yourself because only by feeling the truth of what I say
to you will you truly understand what I am saying and be ready to play your part in this.

There are those who have a desire for The Lights of The Universal Grid to flutter and dim.
We know this and we have always known this.
I speak only of those beings to plead with you to send them Pure Love and Pure Light.

So now you have an understanding of the mission of The Sacred Order Of The Magi,
I return to my own story. I am Melchior and I am experiencing the greatest pleasure
to be with you at this time. I have waited many life times to tell my story however
never has the time been more appropriate to do so than NOW.
Many times I viewed what was happening on your Earthly Grid and wondered whether
I could or should intervene however no one has the right to do that as you know.
Everyone plays their life's role and purposes as they wish. I am sure you know this (Laughingly said).

I was an enquiring child and life was changing in England as it did elsewhere in The World.
It was a time of discovery, discussion, star gazing, star plotting and star following.
I could read The Stars in the sky as surely as you can read a book.
The skies were lucent and as I learned to understand the constellations of The Stars
in the changing seasons; the myriad of twinkling, dazzling lights held the answers
to my quest for knowledge.

And then, there came in the sky, a constellation of Stars never seen before.
To my eye, they were magnificent and puzzling. I knew them and I knew them not.
Every night, I would rush to my viewing point to gaze at these wondrous orbs eager
to unlock the portent. I knew within me that I would find the answer however that
did not cease my fretting to do so. Would I be the one to read these Stars
and reveal the message which I believed they held for us.
Would it be an Omen of Wonder or would they prove to be an Omen of Doom?
I had listened to such tales told to us by the Elders.
I, Melchior wanted to be the one who told the story of these Stars.
I didn't know why. I just believed it to be my destiny. It proved to be so.

One night as I gazed at The Stars they swirled around forming a pattern in the sky.
I blinked and I blinked again. I thought I had been gazing for too long and had become
dizzy however as soon as this wondrous formation had begun, so it ceased
and to my amazement, the formation of Stars had culminated into one magnificent Star
of a magnitude and might that I had never seen before ..or since.
I was breathless and could not take my eyes away from this phenomenon.
I could hear a sound in the sky. It may have emanated from this magnificent Star.
It seemed as though it did and I fell to the ground in awe of its great beauty.
The Star was so big, I wondered whether it was a falling Star
and had fallen to the ground where I lay.

It encompassed me and I was absorbed by it. My whole being became The Star
and The Star became me! Strange to say, I was not afraid.
I loved the experience and wanted it to go on and on. I don't know how long it lasted.
It was all over before I knew it and The Star while still large and luminescent returned
to the sky whereas a short while before I felt it had been with me on the ground.
The experience changed me forever and I now held a message imparted to me
by The Star. The Star told me of a journey I would embark upon. It would be arduous
and fraught with danger and there were those who would try to dissuade me however
I would undertake the journey by following The Star because it was my destiny.
The Star did not reveal the end of this journey.
The end to the journey would be of my own making.
I was excited, a little scared however determined to overrule all arguments to prevent me.

There was a trail known to those who would embark upon trade journeys to the countries
in The East and I met with those who regularly undertook this treacherous pilgrimage for
reasons of buying and selling merchandise. We haggled and bartered for all the necessary
equipment I would need and they prepared me for the long and arduous journey I was to
undergo in a good natured and sometimes forceful manner. Those who had undertaken
this journey previously wanted to ensure that I was not embarking upon such a long trail
without knowing how dangerous such an undertaking it was going to be. Some tried to
persuade me and others said I would not be the man for such a quest; that I would be a
dangerous burden for them all. I believe that The Star's influence was such that they had
all fallen under her spell and my destiny became my reality without too much opposition.
It was all to no avail because I knew I would follow The Star. The experience of being
enthralled by The Star had enchanted me. I prepared to make my journey
following my Enchantress.

The true story of the Three Wise Men of the Christmas Nativity Story has remained a secret for over two thousand years. The Three Wise Men are the founder members of the very Sacred Order of the Magi. The Order has survived for two thousand years much the same as the Ancient Orders of Stonemasons and the Knights Templar. Unlike those orders, however, it has remained a secret—until now. Members of the Sacred Order of the Magi have worked on their own or in small groups, with some members never knowing others. For certain families, it was a dynasty that encompassed some but not all family members. The vow that all members of the Sacred Order of the Magi take is to uphold in their hearts and souls the truth of Jesus’ mission. Why was the order kept a secret? Why is the story of the Three Wise Men and their Sacred Order being disclosed now? You will read how the Three Wise Men of love and light with unrelenting integrity, bravery, and overwhelming sadness discover the role they are to play in Jesus’ destiny. For his sake and safety and for the salvation of our planet, the Sacred Order of the Magi went undercover and became the Spiritual Security Service. Now is the time to reveal its existence. Now is the time to disclose many sacred truths. It was ordained to be so. Now is the time of the second coming of Jesus, or Yeshua Ben Joseph, as he was known to the Magi. The story of The Three Wise Men is not solely for Christmas; it is for all time.

Dianne Pegler began channelling the story of The Sacred Order of the Magi when the first message came through to her just before Christmas, 2010. The messages continued until the book was finished three years later. Having been an officer in MI5 the UK’s Security Service during the time of the first female director general, Dianne is intrigued by the revelation that the Magi formed themselves into a Spiritual Security Service. Gifted with an enquiring mind and following her intuition, Dianne has attended many spiritual events. She trained as a Heal Your Life teacher based on Louise Hay’s bestselling book, and she became an Angel Therapist™ studying with Doreen Virtue in California and Glastonbury. Dianne holds a certificate in counselling. Dianne lives just outside of London with her husband and daughter in the picturesque village of Horndon-on-the-Hill, which dates back as far as the Domesday Book. Visit her online at www.diannepegler.com.