PEMF - The Fifth Element of Health

Learn Why Pulsed Electromagnetic Field (PEMF) Therapy Supercharges Your Health Like Nothing Else!

by Bryant A. Meyers 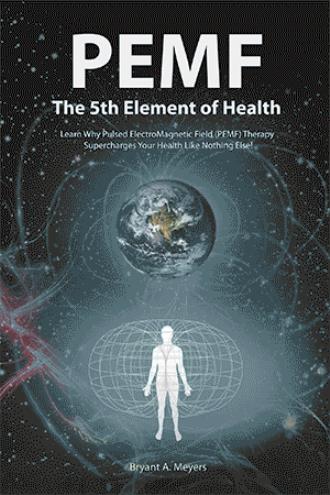 Everything in life is vibration.
--Albert Einstein

Earlier in the book we learned that pulsating magnetic fields of the earth are as essential for life, as food, water, and oxygen. In this section we'll explore further proof of our intimate inter-dependence between the earth, our bodies, minds and cells and even DNA!
I call this the body-mind-earth connection. We hear a lot about the body-mind connection in alternative medicine, when in actuality it is not the whole picture as it lacks the key element - earth. Remember our holographic energy body is an open system connecting upwards from the earth and cosmos and downwards to the organs, tissues, cells and atoms. Perhaps the most important idea taken from this book is that the 0-30 Hz frequency range the earth provides is the great connector, which energizes, synchronizes and "plugs" us into the earth's nurturing energy field. This field is also holographic and energetic like our body’s own energy field. It more than sustains, protects and nourishes all your organ systems, tissues, and cells. We are part of the very fabric of the earth's holographic field. Very simply, health is a state of being connected to the earth, its fields and all the elements needed for life, while ill health is a mirrored state of being disconnected.
The chart below summarizes the body-mind-earth connection. This is one of the most important points in this book, so I want to give you the big picture first, expand, and summarize so this idea is firmly understood on many levels.

The following are the four aspects of energy related to the body - mind - earth connection:

First, the frequencies that the earth emits through both the Schumann and geomagnetic frequencies (along with the higher harmonics or “octaves”) are primarily in the 0-30 Hz range.
Secondly; Sisken and Walker proved that the tissues in our body resonate primarily to the frequency range of 0-30 Hz. Adey and Bawin’s research showed that the actual biological window of frequencies our cells resonates to is only found within the 0-30Hz range, NOT outside of it.
Thirdly, the brain and central nervous system are tuned to the 0-30 Hz frequency range as evidenced by the medically established EEG brain state frequencies from low delta to high Beta.
Lastly, Dr. Zimmerman, co-pioneer of SQUID, a technology developed for measuring very weak magnetic fields, found by studying energy healers, our hands and bodies EMIT these 0-30Hz frequencies. Later Japanese researcher Seto confirmed this result independently with master Chi Kung practitioners.
The earth emits this range of 0-30Hz frequencies, we absorb them, our brains are tuned to them and we even EMIT them. There is a fundamental connection, or more accurately "entrainment" between the body, mind and earth. When I first understood this, I got goose bumps. Of course! It was obvious; the earth emits precisely the right intensity and frequency at the exact time we need it! Let’s look more closely at these four aspects of the body-mind-earth connection and the research that supports them.

Frequencies the Cells Resonate to and Absorb (0-30Hz)

Beginning in the mid-70s, W.R. Adey and S.M. Bawin did several experiments with brain tissues of chickens and cats. They irradiated the animal tissue with a wide range of pulsed electromagnetic field (PEMF) intensities and frequencies.
Adey and Bawin’s research found that when cells were treated with a certain range of frequencies and intensities they responded with readable results. Outside of these ranges or "windows"; however, there was no response or minimal at best. The experimentally determined frequency range is known as the Adey-window or more descriptively the “biological window” of frequencies living cells respond to in a favorable way3. The Adey-window corresponds exactly to the primary frequencies of the earth’s Schumann and geomagnetic fields (also 0 - 30 Hz).

C.F. Blackman and his colleagues confirmed Adey and Bawin’s studies of brain tissue possessing maximum frequency sensitivity between 6 and 20 Hz at low power .76 mW/cm2. This range is right at the same peak of the 0-30 Hz range found in the Adey and Bawin study4.
Note the lower half of the graph’s power or intensity/time window. W.R. Adey himself was reported to say with regards to PEMF signals on treating the body, “small is powerful, less is more”. Research has shown that biological systems defy the seemingly obvious logic that a larger stimulus should produce a larger effect. As it turns out, in living systems weak and even extremely weak fields can have very potent and powerful effects, while strong fields may have little or no effect (or even be harmful). So not only is there a frequency window, but there is an intensity window as well - which again are the intensities the earth gives us.

Evidence that our cells and Tissues need 0-30Hz PEMF

At the level of tissues, the same 0-30 Hz frequency range has been shown to have the most positive benefits on the human body. Figure 18 lists frequencies in the 0-30 Hz that biomedical researchers are finding effective for the healing of soft and hard tissues.
In 1995, Siskin & Walker noted that a PEMF frequency of 2Hz stimulated nerve regeneration, and a frequency of 7Hz can be used to stimulate bone growth. Frequencies of 10Hz promotes ligament healing, and 15, 20, and 72Hz may be used to decrease skin necrosis and stimulate capillary formation5. Since tissues and organs are made of cells, this research further confirms the hypothesis the human body needs, resonates and responds to the 0-30 Hz range of frequencies.

You probably know that food, water, sunlight, and oxygen are required for life, but there is a fifth element of health that is equally vital and often overlooked: The Earth’s magnetic field and its corresponding PEMFs (pulsed electromagnetic fields). The two main components of Earth’s PEMFs, the Schumann and Geomagnetic frequencies, are so essential that NASA and the Russian space program equip their spacecrafts with devices that replicate these frequencies. These frequencies are absolutely necessary for the human body’s circadian rhythms, energy production, and even keeping the body free from pain. But there is a big problem on planet earth right now, rather, a twofold problem, as to why we are no longer getting these life-nurturing energies of the earth. In this book we’ll explore the current problem and how the new science of PEMF therapy (a branch of energy medicine), based on modern quantum field theory, is the solution to this problem, with the many benefits listed below:

• increase your energy and vitality

• keep your bones strong and healthy

• help your body with healing and regeneration

• plus many more benefits

Bryant Meyers, BS MA Physics, is a former physics professor, TV show host, and leading expert in the field of energy medicine and PEMF therapy. For over eighteen years, he has researched, tested, tried, and investigated well over $500,000 worth of energy medicine and frequency devices, studying with many of the world’s experts. During the past six years he has dedicated his life and research to PEMF (Pulsed Electromagnetic Field) therapy, which he feels is the crown jewel of energy medicine. He has also helped and personally assisted thousands of people in this exciting new field. Bryant currently lives in Sarasota, Florida, near the beautiful Siesta Key Beach.