A selection of poems from The Eight Books 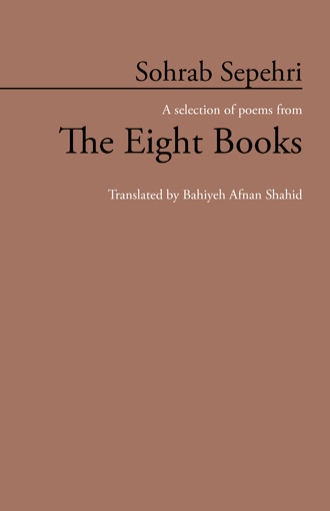 The Iranian poet and painter Sohrab Sepehri was born in Kashan, Iran, in 1928, and claimed by cancer in 1980. He had an upbringing that tried to discipline and shape him, whether at home or at school, but he was not exactly a conformist. He was an intelligent, sensitive, artistically gifted, poetically expressive, somewhat withdrawn, soft-spoken human being. Never married, widely travelled whenever finances permitted, he visited Japan – where he studied woodcut techniques – China, India, Pakistan, Afghanistan, Greece, Egypt, Austria, Italy, France, Britain (for medical treatment) and the United States. Some he visited more than once, and for a time he lived in the United States and France. He tried his hand at stage design, as well as translating old Chinese and Japanese poetry into Farsi.

Sepehri started painting and writing poetry at an early age. At both he excelled. For both he received acclaim and criticism. Now he is enshrined as one of the foremost Iranian poets and painters of the 20th century.

During his lifetime, a great many changes came about, not only in Iran and the Middle East, but all around the world. Many of the norms of life – that is, the ‘traditional’ way of doing things – changed, sometimes drastically, sometimes gradually. Whether it was child rearing, education, marriage, work, society, politics or religion, they went through metamorphoses and change, often of a rather drastic, ‘shocking’, or maybe even ‘blasphemous’ kind. Thousands of questions were raised, and thousands of answers were suggested, simply because there was an urgent need for them.

One such was provided by Sohrab Sepehri. Doubtless the outcome of his own penetrating and ever-questioning search, he found that the answers were all around him. His two main sources of insight were nature – which is why he is sometimes described as a ‘nature mystic’ – and a very long mystical tradition, which was not only larger than life, but

where one, ‘on the waters of providential guidance… rowed until the full manifestation of wonder and awe’, and where, ‘One must sit, close to the unfolding, some place between rapture and illumination.’

Seemingly unaffected and uninvolved in what was happening around him, he turned inward, and in his own mind and heart worked out the answers that to him appeared suitable and satisfactory for many of the problems that prevailed.

His solution lay in a new look at humanity in its natural habitat, at one with nature, acting and reacting with a creation that was alive with water, light, soil and sun, plant and animal life. These had personalities and characters of their own, with which people could feel, interact and relate, as parts of a totality full of beauty and vitality. Having changed the way one looked at everything around made it easier for categories and divisions to fall away, and the underlying unity of being to become visible and palpable.

To be able to ‘see’ that way, Sepehri started with an old mystic tradition, a favourite symbol: the cleansing of the mirror of the heart. That was where the journey started and ended. The necessary preamble was to ‘break free of the caravan’ of the norm and the accepted, and to launch on a road that took the ‘restless wayfarer from the road of illusions’ – illusions about material needs, greed, power – and allowed him to step into ‘an enchanted land’ where he turned away from the road of delusion.

Sepehri does not make for easy reading, particularly as the imagery that he uses is so very special to him. However, when one has established a bond with him, his words and images come alive, his plea to the houris to ‘wash away from my sight the blinding spell’ rings true and ceases to be a poet’s imagination. One finds that, indeed, ‘a silver key has been turned’, that ‘the door of awareness has opened’, and that one has truly ‘stepped into an enchanted land’. Here one can join him when he says ‘at the edge of dew let us stand, alight on a leaf’. You can believe him when he says, ‘a poppy plant has bathed me in the flow of being’. The simple reality for Sohrab Sepehri is that this enchanted land is no fairytale, but the landscape of everyday life and living, close to nature, where ‘snow sits on the shoulder of silence’ and ‘Time on the spine of a jasmine flower’. He does not speak of poetic fancies but what for him are true realities, where even laughter can ‘cast stark shadows’ and where his ‘restless hands … stretched toward a fruit, do not denote a desire to despoil, but a thirst for friendship’. He speaks of ‘sadness in search of a smile’, of his ‘heart saddened in sunset tightness’, where:

Continuity that pours poison in my veins

Depriving me of the idea of the here and now

And from far and distant places

Binds me to thoughts of decay and decline.

Sepehri repeatedly spoke of his loneliness, of ‘inner desolation’, of the ‘search for awareness’. He could be misjudged as a poet wallowing in self-pity, but the protagonist in his real-life drama was humanity, rather than he himself. His experience, his new way of seeing things, brings him to the point where the sanctity and the simplicity of life, of awareness of the world of nature, of human relationships, of the ‘closeness of God among these scented stocks, at the foot of that tall pine tree’, where ‘living was like a repeated shower of happiness, a plane tree full of starlings’, became the central point of existence.

For him, being, existence, awareness, and ever-progressive maturity were of the essence. He stated it very simply in one phrase: ‘As long as poppies bloom, life must be lived.’ The aptness of his approach to materialism, commercialism, environmental despoiling, money and power, takes one back to the sacredness of nature, the oneness of all the diversity within it, and humanity as an integral, interconnected, interdependent part of it.

Surveying both the mysticism and mythology of the East, whether Japanese, Chinese or Indian, Iranian or Islamic, he seemed to conclude – as many others had done before him – that humanity had lost touch with the original innocence that prevailed in Paradise, and its task in this world was to regain that condition. The way to do this was through a new understanding of nature, our place in it and as an integral part of creation, to develop a clear awareness of the oneness of being. As human beings, one major step was to realise the divine potential within us – a potential that exists in everyone, and maybe in everything – if only allowed to come to fruition. Some of the hurdles are the many masks that upbringing, schooling, peer pressure, society, religion and politics impose on people. All this layering disguises the original spirit and soul that we are born with – our original heritage, our birthright dowry. Sepehri’s suggestion? Surrounded and in touch with nature, take a deep breath and wash your eyes and soul from the overlaying masks. Look within and see what reality and beauty reside there. Look without, and see how akin it is.

Considering the ‘inner desolation’ that we can sometimes suffer, Sepehri suggests that we should ‘break free from the caravan’. But for this breaking away, there is a price to pay, for here the ‘resounding of the cup of loneliness’ is heard, though not without the knowledge that ‘beauty and suffering are its warp and weft’. Here is ‘sadness in search of a smile’, but also ‘a tune that bursts open the grave of my mind’. He even envisions a blossoming in the valley of death – death of self – which for him was not a place of ‘darkness and loneliness’ but ‘a beautiful retreat’ where regeneration occurs.

The Iranian poet and painter Sohrab Sepehri (1928–1980) is revered today for many of the things he was criticized for during his lifetime. Born and raised in the ancient city of Kashan, he was educated in Tehran and travelled widely. A gentle introvert by nature, he was accused of escapism when his reaction to the world around him was to go back to nature, mysticism and mythology, poetry and painting. This mystic of the twentieth century seeks a light that radiates from the individual soul and ultimately affects its relationship with others and the world around it. While Rumi, the mystic of the thirteenth century, dances, sings, and chants out loud that he comes from the world of spirit and is a stranger in the world of matter, Sepehri, quietly aware of humanity in a milieu alien to its physical, psychological, and spiritual needs, in poetry and painting, appeared to stroke human consciousness into a tranquility, almost a state of beatitude, which nevertheless is never quite free of the ongoing struggle for “awareness, understanding and illumination.”

Sepehri had a free and sometimes convoluted approach to the verities of life, insisting that the book of everyday “illusions” must be closed and …

… one must rise
And walk along the stretch of time,
Look at the flowers, hear the enigma.
One must run until the end of being …
One must sit close to the unfolding,
Some place between rapture and illumination.
(Both Line and Space. Bk.8)

In this fresh translation, Bahiyeh Afnan Shahid successfully conveys the meaning, feelings, and sensitivity of the Persian original allowing the reader to appreciate the pertinence of Sepehri to the twenty-first century.

Sohrab Sepehri, poet and painter, was born in Kashan, Iran in 1928 and was claimed by cancer in 1980. He had an upbringing that tried to discipline and shape him, whether at home or at school, but he was not exactly a conformist. He was an intelligent, sensitive, artistically gifted, poetically expressive, somewhat withdrawn, soft-spoken human being.

Sepehri started painting and writing poetry at an early age. He excelled at both. For both he received acclaim and criticism. Now he is enshrined as one of the foremost Iranian poets and painters of the twentieth century.

This modern-day aref (mystic), poet. and painter is convincingly sincere in his heartfelt and touching approach to the way we must look at our world, and our fellow humans, in these stressful, problematic times.