Conclusions of a Parapsychologist

What Paranormal Phenomena Tell Us 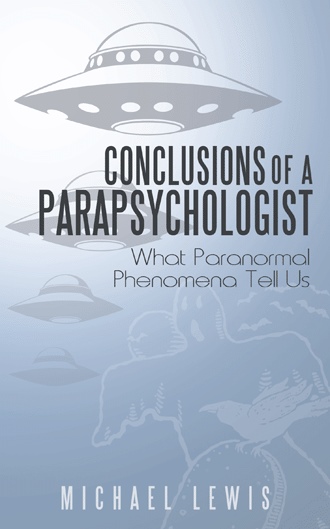 I have long felt that after so many years of investigating the paranormal, it is about time that someone presented his findings, their implications, and any legitimate conclusions in a concise, readable, non-technical format for the general public. So many investigators are content to write accounts of ghostly happenings which leave the reader to draw his own conclusions. Too many researchers like to assume a scientific stance in order to give themselves a veneer of respectability, but in doing so preclude themselves from coming to any conclusion outside the current scientific paradigm. This is a catch-22 situation, as Science does not permit its followers to stray from the straight and narrow, in case they discover anything which might disturb the carefully constructed world. Science of course likes to give its followers pride of place in today’s world, like the priests of former times.
Having been involved with the paranormal since early childhood, I have finally come to the conclusion that there is a whole new world out there with momentous implications for Mankind. If scientific method, logic and reasoning are strictly applied to the mass of data, coupled with personal experience, then it becomes only too apparent that the current world view is woefully inadequate, and we behave like ostriches with our heads buried in the sands.
And what of UFOs? The weight of evidence goes back to the beginnings of recorded history, but because UFOs do not fit in with the accepted scientific viewpoint, they are totally ignored! If the man in the street glances up and sees an airliner coming into land at Heathrow, this is perfectly acceptable, but if he sees a classic flying disc, then he is condemned as a poor observer not to mention his mental ability being called into question. In this respect, life is a lottery: if you happen to see an airliner while walking down the street, you win, but if you see a flying disc, you lose. You have no control over what you happen to see in the sky, but Science either praises you or condemns you! This is the antithesis of pure Science, whose aims should be to carefully investigate everything to increase our knowledge of the world and how it works. Instead, the followers of Science predetermine what can and cannot be studied. Their predecessors, the priests of the established religions, did exactly the same thing at the Council of Nicaea with the same aim, to set themselves up in authority over their fellow men!
Against this background, is it any wonder that paranormal studies have failed to gain a foothold? The man in the street is forbidden by his religion to “dabble in the occult”, and if he chooses the scientific path, he is told that because psychic phenomena cannot be measured by scientific means, there is no evidence for them and therefore they do not exist! Anyone having discernment will see the falseness of that argument, but the man in the street will take the view that Science must always be right. It is time that the man in the street woke up, and it is not my intention to brainwash but merely to inspire him to think for himself and choose his own path. Beware of those who try to lead you into their own rigid thought paths, listen to all viewpoints, accept none, study everything, follow your own spiritual path, and then you will realise how fundamentally different things really are from the generally accepted scientific and religious beliefs. Think how political and religious systems have always sought to repress Freethinkers and Radicals. We now have an unprecedented opportunity with the freedoms we enjoy in the 21st century to move forward and expand our understanding beyond the current restricted confines – let us grasp it with both hands!

Autobiograhy of a Ghosthunter

I have always believed in ghosts. After all, people have reported seeing ghosts with a regularity which goes right back to the earliest recorded literature. Despite this, scientists continue to deny the existence of anything which they cannot explain. It was inevitable that on entering Leicester University to study Latin in 1964 I joined the Society for Psychical Research (SPR) after getting the University chaplain to sponsor me, as the requirement then was. It was here that the first discordant note was struck. The chaplain genially expressed the view that there might be life after death, and therefore was happy for me to pursue the question. Hang on a minute! I thought the clergy were supposed to believe in eternal life, and not only that, wasn’t life after death the raison d’être of the Christian Church?
It wasn’t long before some students in a flat reported strange knocking sounds, and I was on to the case. I was greatly encouraged to experience the principal phenomenon on my first visit (the sound of a handbag falling to the ground), and the case taught me a lot, in particular respecting the value of witness testimony rather than attempting to shoehorn it into a “natural” explanation. I had been a member of the SPR for some time, when the dispute which led to the forming of the Association for the Scientific Study of Anomalous Phenomena (ASSAP) broke out. There never was any chance of a revolutionary like me taking the side of the Establishment which was trying to suppress initiative and restrict members from undertaking investigations. Thus it was that I found myself in ASSAP, and becoming more and more involved in the running of its affairs. Most of its early members, I was horrified to discover later, were practising witches or of kindred disciplines, which I felt was not quite in keeping with ASSAP’s scientific stance, but I thought discretion was the better part of valour. After all, I didn’t want anyone putting a spell on me… Eventually I was offered the coveted post of National Investigations Co-ordinator (NIC), which I held for ten years before ill health forced me to relinquish it. It soon became apparent that a steady stream of cases was not the path to enlightenment. Most of the cases I received were of little interest, but a polite stance had to be maintained and often an investigation mounted. I came to the conclusion that the best cases had to be sought out, and this could only be done by local groups keeping their ear to the ground.
At least half of the cases I received took the form of anomalous photographs. I quickly came to the conclusion that the real anomaly was how anyone could misinterpret natural features as anything else. I established a rule that if I could not see the supposed anomaly in a photograph before reading the covering letter, then it was likely to be a waste of time. I recall being handed a photograph showing the battlefield at Culloden Moor on which the body of a dead soldier could be seen among the heather. Eagerly scanning the photograph, all I could see was the heather. In exasperation, the owner of the photograph pointed out the body, but I still couldn’t see it! The photograph was snatched back by its owner who announced her intention of submitting it to “a proper expert”!! No further mention was made of this photograph, so I assume that the owner did indeed refer it to a proper expert who would have lectured her on how the human brain is adept at discerning recognisable shapes out of random images. But even so, there were occasions when I was obliged to point out certain shortcomings and this was not always appreciated.
I am often asked whether I have seen a ghost. So far the tally is two. The first occasion was during the Summer of 1999 when

Aimed at the popular market, this book will appeal to readers who do not want to be burdened by detail. It presents the author’s conclusions based on facts and invites them to ponder the disturbing implications. Its succinct and readable style will appeal to those with busy lifestyles.

An astonishing account of what it is like to die and experience a day in the Afterlife, during which the author was told how things really are! The author ventures into areas where few dare to tread.

At last – sober facts not speculation about the paranormal from an objective, unbiased researcher who tries to take a scientific viewpoint.

It is a carefully selected and finely expressed group of closely related, well defined and chosen concepts, no doubt from a personal experience that is even wider than that which we here are privileged to share.

The material is presented in a narrative context, and will engage and often astonish the reader.

Michael demonstrates that we are but at the very edge of knowledge, and that all we can see is a small corner of the whole.
A book like this gives us the chance to lift the veil a little, and glimpse the vast uplands beyond.

He has the ability to set down the material clearly and with an attractive writing style, the prose is as clear as a window-pane.”
- Mark Sykes, former Editor-in-Chief, Athena Press

Michael Lewis has had a lifelong interest in the paranormal. He has belonged to all the principal scientific organizations for paranormal research in the UK. In 2006 he underwent a series of Near Death Experiences (NDEs) which not only provided proof for many of his conclusions but broadened his horizons.