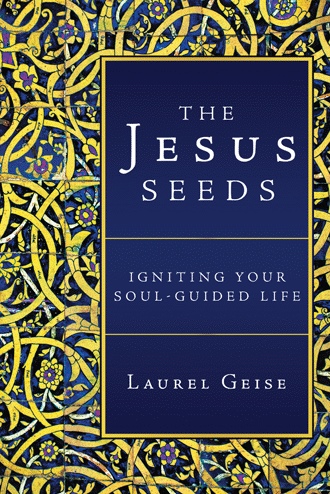 My first glimpse into what would become The Jesus Seeds began innocently during an evening meditation as I relaxed in my favorite easy chair. After a long day at work as a business executive, my evening meditation provided a sacred balance to the demands of excessive office hours and off-the-charts stress levels. This was my nightly practice to bring me back to myself.

Relaxing into silence, I found my awareness suddenly transported to another time and place. I was standing in front of a large pool of water that was so calm and clear that the early dawn light bounced from the reflective surface to the barren mountains in the distance. It was desert dry and the air was crisp. I was in Qumran many thousands of years ago. I was an Essene. As I prepared for my morning prayers with a cleansing ritual, I extended my hands toward the water. In a split second, I was back in my easy chair. I opened my eyes. This brief glimpse into another time stretched me beyond my analytical mind. It propelled me to find out everything that I could about the Essenes, which I now know were a Jewish religious sect known for their austere practices and deep devotion to God.

This intimate experience of a time two thousand years ago, although as real as the hand in front of my face, began to fade into memory. As was my practice, I dutifully recorded it in my soul journal and went on with life.

Now fast forward eight years later. I am in Israel on a group tour engulfed in the magic of this historic land. Each day brought with it experiences to walk in the steps of Jesus Christ and to look upon the world through his eyes. We spent time in Jerusalem as well as in a kibbutz on the shores of the Sea of Galilee. We stopped at the River Jordan and were baptized in the cool water. We continued on to the Dead Sea and floated with effortless ease in the densely rich mineral waters. We planned a stop at Qumran to see the archeological ruins and to walk the mountains where Christ had walked.

Awakening before dawn, our group boarded the tour bus for a short ride to Qumran. We arrived at the site before the gates were open. We had been granted special permission to enter the ancient compound and walk up the mountain. As we climbed, the sun rose slowly over the desert. People began seeking caves where Jesus may have prayed and meditated. In my wanderings, I separated from the group and explored the archaeological ruins. I walked along the dusty pathways and crumbling rocks that were once homes, libraries and temples. Completely alone, I turned a corner and stopped in awe as I saw a familiar outline of a mountain in the distance. My eyes dropped and I realized I was standing in front of an ancient ritual bathing pool. Although it was empty, the familiarity triggered an energy that descended into my body and shook me so intensely that I fell to my knees. I lifted my head and realized that I was gazing upon the ritual bathing pool that I had experienced in my meditation over eight long years ago.

With my head reeling and my body shaking, I received a deafening acknowledgement from inside my being. I was an Essene two thousand years ago, I had lived in Qumran and Jesus had been a friend. I thought of him as a brother and had received many teachings from him that were planted deep within my soul. The seeds would incubate until a future time when the world would be ready to accept the guidance that would facilitate our next evolutionary steps.

This experience was my initiation into a journey that would culminate in The Jesus Seeds. Stunned by this experience, I devoutly recorded it in my soul journal but did not speak of it to anyone. I was afraid that I would be ridiculed for having a “Jesus experience” in the Holy Land.

Many years passed and from time to time I would receive a message during my morning soul journaling (see the Appendix) confirming that I would write a book called The Jesus Seeds. And yet, as time passed, I grew impatient. This felt like one giant cosmic joke where even the Heavens were making fun of my “Holy Land” experience.

And then it happened. On January 2, 2012, I began to receive a divine transmission that started with the words “The Jesus Seeds”. Over and over like a skipping record in my head, all that I could hear was this phrase. I grabbed a blank journal, put pen to paper and began to write down what I was hearing. Each Sunday morning for many months to come, I would sit quietly in the silence of my home and be open to write down the words. Without fail, the sentences, paragraphs and chapters flowed with purpose, grace and ease. This process continued until Sunday morning, April 8th, when the last words were written. I put my pen down. It was Easter morning 2012.

I knew with every fiber of my being, and the certainty of my soul, that I needed to share what had been given to me. There was only one problem. Although I had full faith in the next steps that I had to take, I was afraid that I would be ostracized for the ideas and concepts in this book. I have a Master’s degree in Business Administration and worked in the financial services sector for thirty years. None of this made any sense to my rational mind and it certainly did not fit neatly into the life I was living. The urgency of my soul overpowered the fear of my mind and I now share The Jesus Seeds with you.

Congratulations on following your intuition. By simply picking up this book, you have taken a step to lift and shift your consciousness. The words in this book will create a vibrational expansion within your awareness. As an evolutionary primer, it is not important to intellectualize what you are reading, but rather feel the energy of what is being communicated in your heart, body and soul. As you read, you may feel lightheaded, fall asleep, or feel tingles of remembrance moving through your body. Whatever your experience, continue to read and absorb the energy of the message. The precepts shared are not meant to change or replace any practice or belief system that you have, but rather to deepen your experience as you awaken to the potential that resides in you. It is a work that has been two thousand years in the making. It is offered in the hope that it will be received with an open mind and a compassionate heart.

May you be inspired by these words and embrace the future that we will share together.

At the core of every soul, the seeds of truth and grace await the right frequency of light to awaken them. With this activation, they burst open, allowing wisdom to flood the soul and rise to the cognitive level of the mind. In this awakening comes access to the cosmic encyclopedia of life.

Congratulations on following your intuition. By simply picking up this book, you embark on your journey to activate these seeds. You have taken a step to lift and shift your consciousness. The words will create a vibrational expansion within your awareness. As an evolutionary primer, it is not important to intellectualize what you are reading but rather to feel the energy of what is being communicated in your heart, body, and soul.

As you read, you may feel lightheaded, fall asleep, or feel tingles of remembrance moving through your body. Whatever your experience, continue to absorb the energy of the message. The precepts shared are not meant to change or replace any practice or belief system that you have but rather to deepen your experience as you awaken to the potential that resides in you.

This is a work that has been two thousand years in the making. Empowerment is at your fingertips. Seize it, and ignite your soul-guided life today.

Laurel Geise is an inspirational teacher, author, and speaker who empowers people around the world to live an authentic, soul-guided life. The awakened energy of her message weaves a vision of unbounded human potential waiting to be unleashed. Visit her online at
www.LaurelGeise.com.