How can I keep breathing?

Losing a child, a mother's memoir. 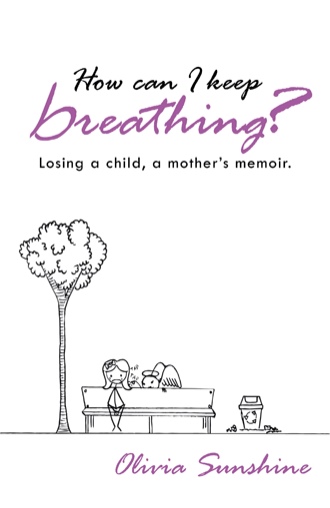 One of life’s hardest blows is to suffer the loss of a child. How Can I Keep Breathing? offers insight and validation to the initial feelings and behaviours that arise from such a trauma, including the struggle to keep on going and the various ways family members cope with this kind of tragedy. Author Olivia Sunshine also shows, through her personal experience, a way of turning loss and pain into an ongoing opportunity to becoming a more fully developed and integrated human being. It is the silver lining that seems so impossible to find when one’s heart has been so badly shattered. The effect of such a loss resonates throughout the rest of each family member’s life, even for siblings born after such a tragedy, creating a lifelong relationship with the deceased child. How Can I Keep Breathing? goes into detail the struggle with this and the coming to terms with it.

Death invites examination of our beliefs about it, asking what, if anything, lies after death. Olivia gives a compassionate view of different ways of handling the death of a child, showing how the spiritual path she chose helped her cope with the loss of her son and how it changed her life for the better in more ways than she could have imagined.

Olivia Sunshine has answered a calling that has been whispering since she was a small girl. After the loss of a child, she has become an ordained reverend minister for the Spiritualist church and a certified counseling hypnotherapist; she continues her studies in these areas. Olivia lives with her husband and three boys in the mountains of beautiful British Colombia, Canada.