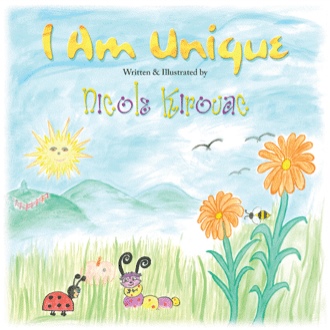 Layce the caterpillar was in the play area of the big farm yard with some friends. They were climbing the tall grass and rolling over the pine cones fallen from the trees above. They were having so much fun enjoying the nice warm day. The long green striped caterpillar laughed at Layce for not having any stripes. Then all the caterpillars were laughing too. Layce looked down and only saw spots, no stripes. Layce started to cry and squirmed across the grass to the fallen red apple. Next to the apple was a ladybug that saw that Layce’s feelings were hurt by the other caterpillars’ laughs. Ladybug looked Layce in the eyes and said “Why little caterpillar you have no stripes because you were born with amazing spots instead. Your spots are perfect just for you.” Layce smiled at the ladybug and noticed that the Ladybug had spots too! Layce was still a little sad about the laughs from the other caterpillars and asked Ladybug why so many things between them were different. Like stripes and spots, Furry or not, Green, blue or purple, Long or short, Not the same of any sort! Ladybug was very wise and explained to Layce that the caterpillars were all Unique. “U-what?”, Layce asked. “UNIQUE”, answered Ladybug, “which means that nobody is the same. We are all different in a lot of ways, and that’s perfectly OK.” “So I’m OK?”, asked Layce, “because I’m …U-NIQUE? “ “You’ve got it little caterpillar, that’s exactly right! “, exclaimed Ladybug. Layce looked sad again, even though Ladybug thought Layce was feeling better now. “What is it little caterpillar, why the sad face?” asked Ladybug confused. “You called me little. I don’t want to be little. I want to be big”, said Layce in a sad voice. Ladybug told Layce that living things are always changing and growing in one way or another like the grass, bugs and even the flowers. “You are whole and perfect as you were created”, said Ladybug. “You are Unique”.

This is a little story for children of all ages and genders about Layce the caterpillar who is being teased by friends for the differences between them. Learn how with a little help from a wise new friend Layce discovers the “I am Unique” statement that helps to build further confidence and self esteem.

Nicole Kirouac is a mother of three children and a Pediatric Nurse who Specializes in the field of Endocrinology (growth, hormones, gender and more). She has had extensive experience in working with children who have been teased or bullied for a variety of differences. Nicole is passionate about helping children and teens gain self-acceptance and grow spiritually. She has had first hand experience of living with a chronic health condition and having been teased as a child. Nicole is known as # 4 in her family of five girls from the small town of St. Adolphe in Manitoba, Canada. Now living in La Salle, Manitoba and working in Winnipeg, she takes pride in helping children and teens with a variety of Endocrine conditions as well as being a role model for her own children.