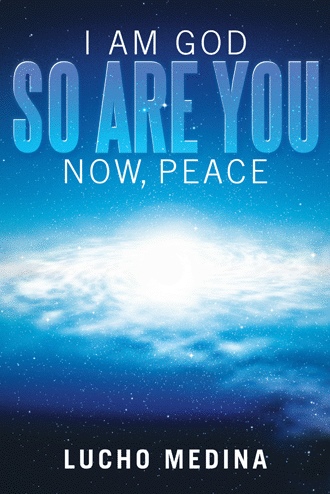 Excerpts
From
I Am God. So Are You. Now Peace.
In the beginning:
It is the unconscious power of the Universe, capable to create what you see and do not see, without the need to understand why. It is what it is, in universal terms; there are no changes. It is the course that follows nothing. It just happens. Through the natural process of what is supposed to happen.
There are no rules.
There are no laws.
There are no systems.
And there is no understanding of anything, there is no need to, and don’t have to. It is only our human perception that things are being created or being destroyed. We lack the understanding of “how,” not “why” the universe works. But we will one day. Understand!

Evolution:
Evolution is not a theory, it is a fact. Nothing that you see or do not see today will be the same tomorrow!
For the past to exist there had to be a process of time, or time that has evolved. That process of time is what is called evolution and once you understand this, that there is evolution in everything you see and do not see it becomes a fact. And at that moment theory disappears.

Science:
“Facts do not leave room for a reasonable doubt”

Religion:
“The power of the mind: capable to imagine, believe in it, and live with it for thousands of years”.
“Man has become incapable to act without the blessing of an imaginary being”.

Hunger:
You will know how easy it can be not to let a child die of hunger or a person go hungry anywhere or any corner of the World. You will also understand that it is up to us to make it happen and not governments, though it would be easier if they could help, and possibly after you understand this, then they too will understand how and what must be done. So! Let’s do it. Kill Hunger.

United Nations:
When this institution was created it was created for those times. Understanding the past, fixing the present and hoping for a better future. Yet you “UN” understood nothing, not the past not the present and completely ignore the future.
The United Nations Charter has to be written all over again because there is no country better than the other, and there are no FIVE countries with more power than 195 countries.

War:
We all know man has been at war since the beginning of times or let’s say since he is capable to reason or capable to create reasons, what is the difference, they are good reasons according to man, but are they? Is a vengeful action a good reason? Is there any reason a good reason? I do not think so. Because every reason is a created reason and, it’s ignorance that makes us create those reasons.

Distinction:
“We must learn to think not as a country but as human beings and nothing else”

Sociology:
“To have social changes we must go beyond religion and beyond Government”

Capitalism:
“It is not capitalism if you exploit the ignorance of the people, it is tyranny”.

Government:
“Government exists because of the people and not the other way around. Without people there would not be governments”.
“When bad things happen, God blames the Devil and government blames the other party”.

Justice:
Law of the land: At this moment there is no such thing as the law of the Land and there has never been.
“It is not the amount of laws that will make a better society; it has to be the society that has to become better”

Sports:
“Every sport has elements of benefit for a human life we just go through it blindly”.

Art:
“If we build ourselves consciously, we can make ourselves a master piece, and we will one day”.

Media:
“Where we are right now, we stand oppressed by the governments as well as by the media”.

Life:
“Nobody sends you here. You are just here. And now that you here, it’s you responsibility what you do with your life while you are here”.

Love:
“Love, been a created emotion, in time we will be capable to create as much love as we need to, for the right reasons”,

Miracles Witchcraft Voodoo:
All this practices work under the same principles. The principles of belief, or what we do not understand “the unconscious manipulation of the energy”.

Consciousness:
“I am: state of being. There is nothing before you. There is nothing after you, consciously”.
You are not born knowing what you are going to be, from here on; perceptions, feelings, emotions, through your life will determine the kind of conscious being you are going to be.
“Consciousness is the integrated relationship of a living element and the Universe. Everything that has life has a direct relationship with the Universe, consciously or unconsciously”.
“Everything that you see and do not see is an integral part of the Universe”.

When you look at the world, it seems so vast yet complicated to understand. Its people, its forms of governments and its systems of governments. Its beliefs, forms of beliefs and systems of beliefs; all created by man and/or the rule of man over another man; when all we needed was to understand that there are no systems of government as there are no systems of beliefs without its people, as there are no rich corporations or anything else without its people. People are the most important element on this part of the universe, because nothing would matter if we did not exist, and because we exist everything matters, and because it matters the rule of man has been taking advantage of its people, because its people were too ignorant to understand those simple facts. All this has been going on for thousands of years and if “we” the people do not stop this ignorance, we will continue to live like this forever. “Change the Charter of the United Nations”; as soon as we change this, we can kill world hunger in three years and live in peace immediately. It is time for the people to understand knowledge, and with knowledge we can change all systems of beliefs as well as all systems of government. All you have to do is seek for knowledge, and with knowledge we can all conquer the universe, live forever, and live happily, rich and in peace.
—from I Am God. So Are You. Now, Peace

Lucho Medina was born in 1946 in the Andean town of Huaraz, Peru. His father dies when he is thirteen; Lucho decides to meet the devil to become wealthy. He studies from the Rosicrucian Order about occultism. When time came for him to meet the devil, the devil never showed up. He moves to Lima and becomes a jeweler at 14; He sells to major jewelry stores. Studies yoga and in 1969 migrates to the US. In1970 sets up business on W 47th street NYC. Studies Jewelry Design at The Mechanical Institute; Diamond Grading at The Gemological Institute of America (GIA); studies Martial arts, Shotokan, Goju-ryu; studies Critiques in Art from the Metropolitan Museum of Art, Portrait Painting at the Art Students League, Fashion design at Fashion Institute of Technology (FIT). His jewelry line is sold throughout the country. Goes mining to Uganda and Liberia, opens a Financing Company in Zug and London. Is interviewed by local NY News Channels about the current Gold Markets, Is invited to the Kiwanis Club at the United Nation’s luncheon of European Diplomats and gives his opinion on effects of the Gold Market and the economy. After the attack of 9/11 he designs a sculpture and sends one to each member of the United Nations Security Council. Convinced this would not work, he decides to share: I Am God. So Are You. Now, Peace.