Must Be on 'Roids 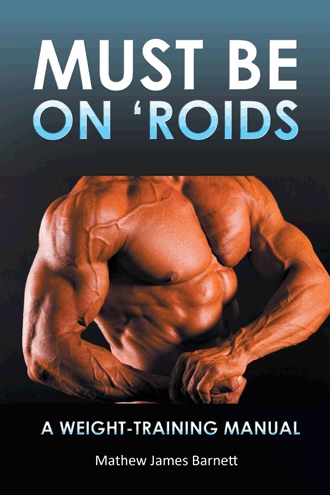 Mathew James Barnett explained that his book is a light year away from when he first started using weights to increase his size and strength. He said there is twenty years of working out between his first workout and this book. He has a stack of books and magazines that all promised they had something to offer. He recalls following all the systems with none really standing out from the rest.

Trial and error in the gym, lead him to the methods in his book. He stated that he knew he was onto something when he heard people asking those people around him, if he was using steroids. Eventually people also began to ask him directly.

He stated that there were people in the gym’s he used, who were using steroids. To his surprise, Mat recalled that people were starting to copy his methods, including the steroid users. He explained that people in the gym saw his results and saw that he did some things differently to what everyone was doing. Also, that it was easy for them to copy him.

Mat explained the name of the book is from true events, but he agreed it’s an odd name for a bodybuilding book. Mat stated that when people know his story, they’ll agree there’s only one name for his book. Mat said there isn’t a person in the gym, anywhere in the world, that wouldn’t benefit from following his humble little book.

Mathew James Barnett’s passion for sports began in childhood. He enjoys cricket, swimming, martial arts, and surfing, but his favourite remains weight training. He made representative level in swimming, league, and athletics. He currently lives in Australia.