The Odyssey of a Woman in the XXth Century 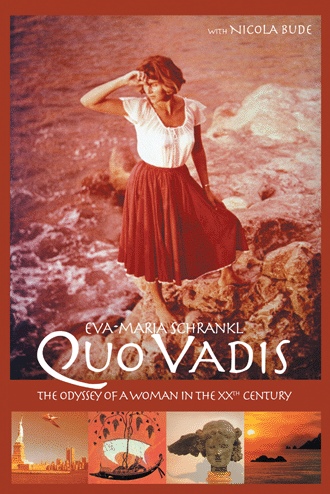 Mirroring her life’s journey to Homer’s 8th century B.C.E. epic, The Odyssey, Eva-Marie Schrankl creatively weaves her autobiography through the changing global landscape of the 20th century, bringing major political and social issues to life. By listening to the sirens’ call, Eva, unlike Ulysses, is able to glean wisdom without falling prey to their curse, ultimately finding peace and happiness.

Quo Vadis artistically delivers an arresting account of universal themes, such as ethics, morality, art, family and existential loneliness in a way that is playful and profound. This book makes a beautiful case of life’s endless surprises, uncovering truths with language that, for all of its formal experimentation, is intimate and poignantly real.

Quo Vadis is a latin phrase meaning “Where are you going?” and also the questions Eva-Maria has asked herself continuously throughout her life.

Born in 1932 in Bavaria, Germany, she witnesses at the age of seven the outbreak of WWII, including the gruesome bombing raids and destruction of Berlin. During the final years of the war, she watches the American Forces entering her small village of Bachendorf in the beautiful Chiemagau in Bavaria.

She feels that Athena, the Greek goddess of logic and wisdom, is accompanying her throughout her journeys, as Athena did Ulysses.

A strong yearning for freedom passes like a red thread through all of her life, beginning as an only child when she attempts to free herself from the loving embrace of her overprotective mother.

In 1952 she is awarded a Fulbright Scholarship and travels to the United States to attend college. There she meets her first husband, Lt. Col. Philip D. Cox, a pilot in the U.S. Air Force and her years on the road begin,.

During her first marriage, she gives birth to two daughters and earns a master’s degree from Columbia University. Soon after, she teaches at Hampton University, one of the first universities for African-American students in the United States.

Whether she was in Berlin during World War II, Beirut during the Six-Day War, Vietnam after the Tet Offensive, or pre-revolutionary Addis Abeba in 1971, her world is entwined with the focal points of history, and global politics play a decisive and powerful role in her life.

.Anti-authoritarian education was her generation’s credo but with her children, she wanted to do everything differently from what her mother did. Is it the right education for a life full of new challenges? What are the values that secure a solid base for social peace and individual happiness in the future?

These questions become poignant again as her four grandchildren are growing up in the turbulent world of today.

Eva-Maria lives in Munich, Germany and the Gulf of Naples.